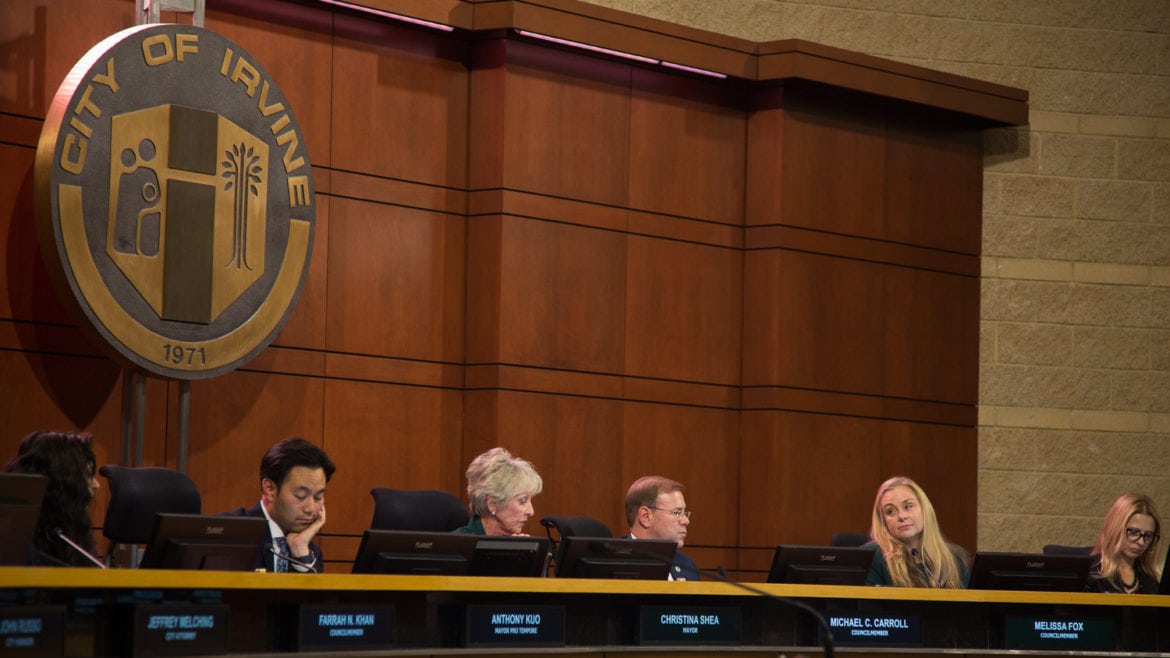 Irvine City Council members Tuesday night voted to retroactively approve $30,000 of spending on mailers by Councilman Mike Carroll after months of public calls for the panel to discuss the issue.

The mailers first came to light in September, when Councilwoman Melissa Fox filed a complaint with the California Fair Political Practices Commission, the state’s chief campaign finance watchdog, over $70,000 Carroll spent without council approval over the past year advertising several events he hosted.

The mailers did not explicitly endorse Carroll’s campaign, but prominently featured his name and invited residents to town halls and other exclusive events. It is still unclear what mailing list Carroll used for the mailers, and the events were also promoted on his Facebook page.

While the council is allowed to send out mail, Carroll drew the money from his staff account, which has strict city rules governing how the funds can be spent.

Each council member receives just over $90,000 a year to pay staff members, and under city policy the funds can only be used as staff salary without approval by a majority vote of the City Council.

Carroll moved funding from his council aide budget to pay for the mailers. But according to the city policy on how that budget works, he did not have the authority to do that — which resulted in a policy violation.

While Carroll did not speak on the issue at the meeting, in an interview with Voice of OC last week he said the spending was “taxpayer neutral,” because it wouldn’t cost the city any extra money as he chose to furlough his staff to cover costs. He also said that staff never told him he was not allowed to spend the money.

Interim City Manager Marianna Marysheva said the council was only discussing $30,000 because the other $40,000 were from the last fiscal year that ended in June and the staff closed the books last month.

Mayor Christina Shea and Councilwoman Melissa Fox, who were attending their last meeting as members of the council, both asked a variety of questions about the mailers including where the mailing list came from, the total final cost to the city and how the mailers were approved.

“This is an attempted white wash,” Fox said. “We had tens of thousands of dollars diverted just to raise a council member’s profile.”

Carroll and other staff did not respond to their questions, and mayor-elect Farrah Khan voted with Carroll and Councilman Anthony Kuo to approve the $30,000 transfer from Carroll’s staff account to the mail budget to cover the cost.

The vote on the mailers also opens up a broader discussion on limits surrounding the council’s staff accounts. Outside of the meeting, Carroll also said that he wanted to see the city change its policies on the council member funds, removing the current restrictions that require the money be spent on staff.

“Each council member of the city of Irvine gets approximately $100,000 a year, and council members should be able to spend that as they see fit to assist the 280,000 residents of Irvine,” Carroll said in a phone call with Voice of OC.

Kuo said he would be interested in looking at that option, and seeing what the best routes were for making sure the funds were effectively used for everyone. He also said he felt the only reason it came up with Carroll was to justify a political attack ahead of the election.

“I looked at it as, well, you controlled this pot of money. You didn’t spend it, and wanted to put it somewhere else,” Kuo said in a phone call with Voice of OC. “Now if he spent all his aide budget and ran up those expenses you can say he’s being a little irresponsible, but the line items ultimately add up.”

Shea took aim at that comment during the meeting, saying the council should not approve a “slush fund” for council members and that it would limit accountability of the money, but the issue was not broadly discussed by the rest of the council.

In a phone call with Voice of OC after the meeting, Fox said she had major concerns about removing the restrictions surrounding the staff allocation.

“To do what, host lavish dinners? Tout your personal beliefs that have not been supported by council resolution. This is a city manager run city, that’s what the charter provides,” Fox said. “Council members are part time, they are provided staff to facilitate that.”

The Fair Political Practices Commission chose to dismiss the complaint against Carroll surrounding the mailers, and a city investigation will not move forward without council approval.

The council’s next meeting will see Shea and Fox replaced, with Khan taking over as mayor and council members-elect Tammy Kim and Larry Agran swearing the oath of office.