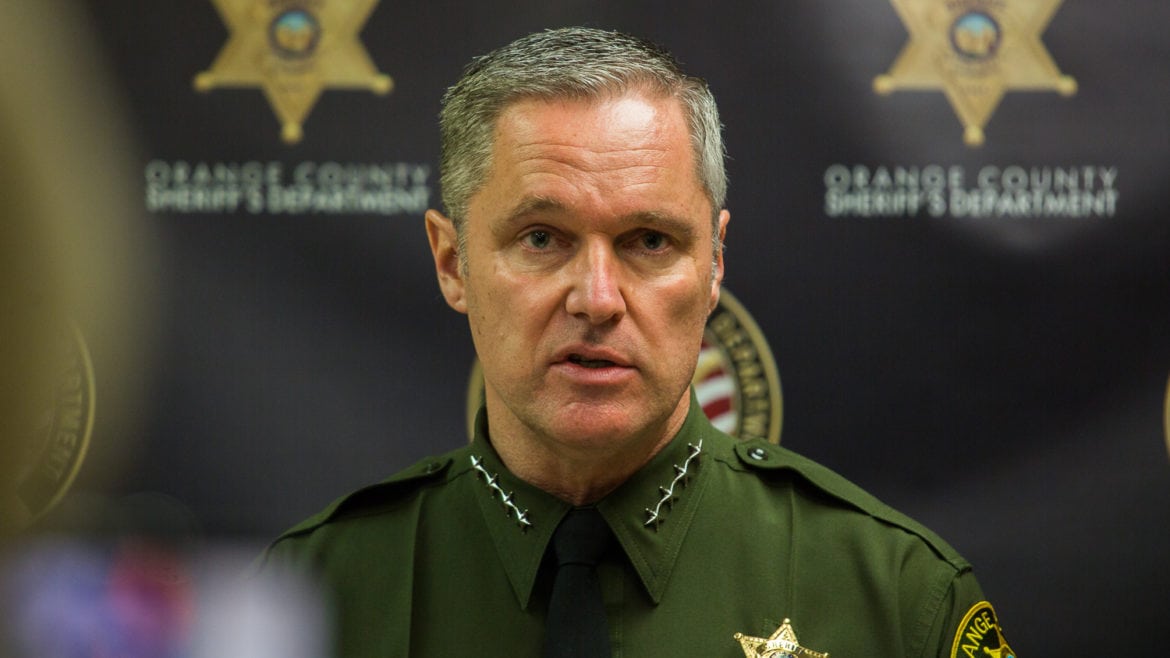 Sheriff Barnes speaks to reporters on March 6, 2020 at his first monthly media briefing.

As a coronavirus outbreak flares in Orange County jails, a local judge is looking to appoint an expert “referee” to decide which inmates with a higher medical risk should be transferred out of jail and into a different type of custody.

The move by OC Superior Court Judge Peter Wilson comes after Sheriff Don Barnes suggested the judge should decide himself who is transferred out of group living areas where a coronavirus outbreak has infected one out of every three inmates. Six of the inmates were in the hospital Friday and one has died.

At a hearing Friday, the judge also poked holes in the sheriff’s contentions that moving inmates out of group living areas, which Wilson ordered a month ago, is a major threat to the community.

“Throughout this discussion, I used ‘release’ the way I used it the first time – which is I don’t mean get-out-of-jail-free card, I mean either moving to a different facility or being placed under supervised release – electronic monitoring, etcetera,” Wilson said.

After reviewing inmate files provided by the Sheriff’s Department, the judge pointed to examples of inmates in jail for a parole violation or providing false identification, and for whom the sheriff’s files say are not a safety risk.

“What is the safety concern to the public that the release of somebody like this – on supervised release, electronic monitoring, etcetera – could possibly pose?” the judge asked. Barnes’ attorneys responded that they didn’t know what the inmate files said, but that a sheriff official could give testimony at a future hearing.

“I make those observations because we are not talking about…giving people a break for the sake of giving them a break,” the judge said. “We’re trying to do an analysis that juxtaposes criminal offenses against time in an environment that subjects them potentially to a life-threatening virus.”

A spokesman for Barnes declined to respond, while noting the sheriff’s position that every inmate who is in jails should remain there.

“The sheriff has put out several statements with respect to who has been released and who he thinks should be released, and those who are still in custody – based on their record and what they have been convicted and/or arrested for – they are best suited in a custody facility,” said Sgt. Dennis Breckner, the sheriff’s spokesman.

The judge indicated he plans to appoint an expert as a “referee” or “special master” to review 34 boxes of inmate files, provided by the sheriff, to possibly advise on which inmates should be moved out of the jails. He said he’d make a final decision after hearing testimony from the sheriff’s coronavirus advisors in a series of hearings that end on Jan. 20.

“Under these circumstances, the appointment of a referee may be not just desirable but simply necessary,” Wilson said.

“The sheriff is obviously encouraged in the meantime to continue to do everything in his power to continue to reduce [the jail] population so as to achieve the reduction necessary for proper social distancing.”

Barnes’ attorneys said they strongly objected to the appointment of such an expert, saying it would be improper for courts to be running an executive branch agency led by an elected official.

The coronavirus outbreak exploded in recent weeks, from 74 general population inmates infected about a month ago to nearly 1,100 on Wednesday.

The judge also said the sheriff has only been general in describing efforts to ensure social distancing among inmates.

He pointed to the sheriff’s report to the court in late December, which says the jails follow CDC guidance for preventing coronavirus.

“Unfortunately that really tells me nothing about what, if anything, has actually been done, beyond the statement that complete social distancing is simply not possible because of the configuration of the jail,” Wilson said.

“In other words, the [sheriff’s] statement is we have a physical facility, we can’t perfectly socially distance,” he added. “[The sheriff’s] report does not address what efforts have been made under the existing conditions to achieve a social distancing to the extent that that is possible.”

“We are spacing inmates out as we have space available. And of course we’re quarantining those inmates that do have Covid,” he said. “Covid-positive and covid-negative inmates are not housed together.”

When inmates are housed together, “they are asked to remain 6 feet apart where possible,” he added.

“What we’re looking forward to is the hearing on [Jan.] 19th and being able to get the opportunity to present the court our measures that we put in place to help control the spread.”