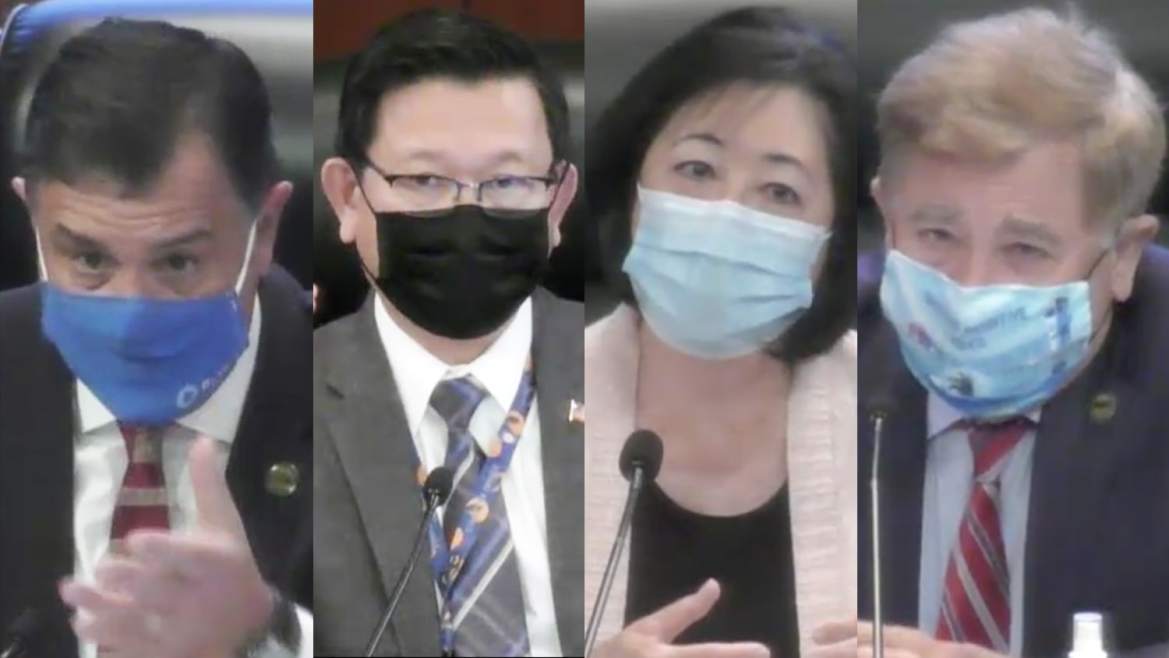 County supervisors (from left): Don Wagner, who opposed the vaccine promotion contract, and the three supervisors who voted for it: Andrew Do, Lisa Bartlett, and Doug Chaffee.

But the effort, which was approved on 3-1 vote, moves forward with lots of questions about how much it will cost and what the PR firm would do.

The single-sentence motion approved by supervisors directs county staff “to enter into a contract with Idea Hall for the County of Orange’s COVID-19 response and vaccine public health communications.”

Like much of the county’s coronavirus spending, the ultimate details will be filled in by county bureaucrats, in private, over the next few days.

County supervisors Don Wagner and Lisa Bartlett criticized the lack of any budget or plan for the work, while other supervisors said it’s crucial to move forward quickly.

“I’ve heard that potentially we are talking about millions of dollars for this contract item,” said Wagner, who opposed the contract.

“I don’t know that there’s going to be the need for those millions…to be spent right now, given the [vaccine promotion] resources that otherwise are out there,” he added, pointing to the existing PR staff at the county and vaccine sites like Disneyland and the Orange County Fire Authority.

“The public is focused on this issue” of vaccines, Wagner added, saying it’s “premature” to move forward with a contract with any PR firms.

Supervisor Bartlett initially opposed moving forward, noting there was no real work plan or budget for the work for the contractor, Idea Hall.

“We need a detailed work plan and a budget,” Bartlett said early in the discussion.

Ten months into the pandemic, she said the county still hasn’t figured out which populations it wants to communicate with about the vaccine.

“We need to identify as a county all of the different populations that we need to communicate with, whether it’s the vulnerable population, the seniors,” said Bartlett, who has often said the county is best positioned to understand local health needs during the pandemic.

“And to really have a complete list, and then figure out from there who or what might be the best entity to be able to get down and into those communities and drill down.”

Bartlett ultimately voted with supervisors Andrew Do and Doug Chaffee to hire the firm before a work plan or budget is developed, saying time is of the essence to get started. The actual terms of the contract will be approved secretly by county staff, under the plan supervisors approved on a 3-1 vote with Wagner opposing.

“If we could move something forward today relative to Idea Hall, and then fill in all the gaps and blanks and come back to the board as soon as possible,” Bartlett said.

Do, who was the most vocal supporter of the contract, pushed back on Wagner, pointing to an alleged double-standard of Wagner supporting PR contracts for the county animal shelter in his own district but not for vaccine outreach.

“I find it interesting that we would see the need to hire a PR firm to help publicize our animal care center and their foundation, but when it comes to reaching the hard-to-reach community [about vaccines], that somehow…it is so hard or not appropriate,” Do said.

“I don’t know if I would agree with that.”

And when Wagner pushed back on letting staff to finalize the contract – which would take place outside of a public meeting – Do jumped in and shut down Wagner’s line of questioning.

“I’m sorry but your interpretation is really irrelevant to this process,” Do told Wagner, noting there was enough support to move forward without Wagner.

Do said it’s crucial to hire outside help to reach people who don’t usually receive messages from the county government.

“The hard to reach populations are by definition hard to reach. So they are not amenable to be communicated with your traditional communication modes,” Do said.

The county is already working with nonprofit health promotion groups to reach higher-risk Latino and Asian residents. None of the supervisors discussed whether it’s feasible for the groups, Latino Health Access and Korean Community Services, to also get messages out about vaccines.

As the vaccine starts to roll out, county officials have set a goal of vaccinating 70 percent of Orange County residents by July 4.

Supervisor Doug Chaffee, who helped recommend the proposed vendor, told Voice of OC the goal is to let the public know the vaccine is “safe and works well,” and to reach communities that are more hesitant to take it,.

Voice of OC reached out to Idea Hall for comment this week but didn’t hear back.

“We have time in all this because getting [the quantity of] vaccine we need is some time off in the future,” Chaffee said Monday. “We’re not having problems of people rejecting it at this point, [because] there’s not enough vaccines to go around.”

The proposed contract should “absolutely” be on the supervisors’ public agenda for constituents to see it and weigh in on it, said a representative of one the largest taxpayer advocacy groups in California.

“There should be transparency. And once again, this is not something they didn’t know was going to happen,” said Susan Shelley, vice president of the Howard Jarvis Taxpayers Association, which is suing the state over a $35 million public outreach contract issued during the pandemic.

Carolyn Cavecche, who leads one of Orange County’s largest taxpayer advocacy groups, also urgedcounty officials to be transparent about how they’re paying for the outreach and answer why existing staff can’t handle it.

“If the County of Orange is going to go forward with this, they need to be very clear to the taxpayers of Orange County where the money is coming from,” said Cavecche, president and CEO of the OC Taxpayers Association, in a statement Monday to Voice of OC.

“My understanding is there is no money left from the CARES [Act] from the feds. And yes it could be backfilled in the future, but more importantly: What programs and projects are they going to be taking money from to cover this contract?” she asked.

There were no answers about that when county supervisors discussed the contract Tuesday and authorized staff to move forward with the work.

Do pushed back on the questions about handing off authority to bureaucrats, saying that’s exactly how things have been handled since day one of the pandemic.

“The delegation to [the county] CEO is no different than the emergency delegation that we gave him eight months ago. And he has been doing all kinds of things under our name: testing, healthcare, housing,” Do said in response to Wagner’s criticisms.

“And so the idea that all of a sudden now – after all that hundreds of millions – that delegating to you the use of a PR firm is so offensive or inconsistent with good governance. I don’t get it,” he added.

“So be that as it may, we hear no more debate. We’ve heard enough.”