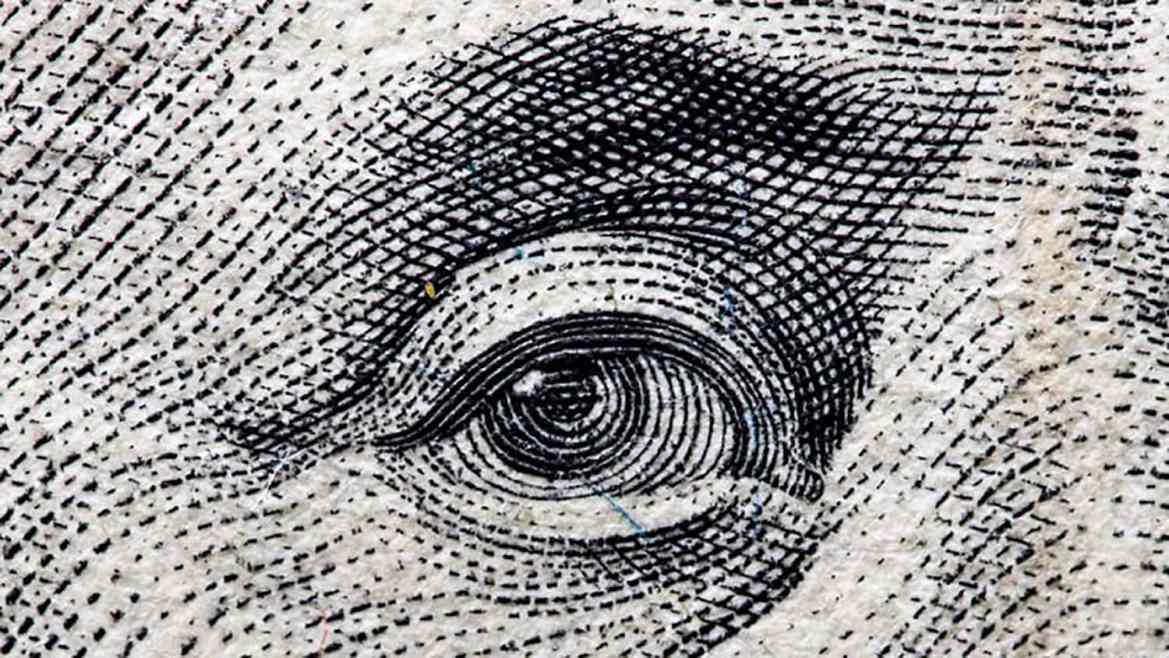 The eye of Benjamin Franklin on a $100 bill.

Much of the crisis is fueled by the expansion of salaries and benefits for police and firefighters, some of the most politically active groups at Orange County city halls.

Though some wonder whether the solution proposed — to issue bonds, pay off the existing unfunded pension liability, and repay the private bondholders at lower interest rates — could open the door to a host of more problems.

They’re called “pension obligation bonds.” Santa Ana put the idea forward last week and Orange could make a decision on Tuesday. Other cities who have looked or are looking into the issue include Huntington Beach, Anaheim, Placentia, and La Habra.

It’s a controversial idea, seen as a money-saving engine by advocates but a risky gamble by critics like former state Senator and OC Supervisor candidate John Moorlach, who warns the bonds are speculative and vulnerable to fluctuating economic conditions:

“City officials think it’s a solution, but it could blow up.”

Local labor leaders like Monica Suter, president of the Service Employees International Union (SEIU)’s Santa Ana chapter, say it’s a necessary measure to ensure those serving in the public sector get the retirement benefits they deserve:

“From the beginning, SEIU 721 members in the City of Santa Ana have been on the frontlines of the pandemic, keeping vital city services running throughout this public health crisis.”

Suter added: “Members like these spend a lifetime working for and earning their pensions, a deferred benefit.  And, just as it can make sense to refinance a home when interest rates are low, it can be fiscally responsible to address other long-term obligations, similarly.”

Orange and Santa Ana are required to meet the pension and benefits commitments they make to their retirees by doling out periodical payments to the California Public Employee Retirement System (CalPERS), which administers the pension plans.

CalPERS calculates how much debt a city owes through a formula weighing factors like the number of a city’s retirees and rate of return (net gain or loss) CalPERS sees on the investments the agency makes with some of its money.

Unfunded liabilities for cities occur when the total amount of obligations to future retirees exceed the funds that a city has set aside for those payments over the next few decades.

This liability can also grow if CalPERS falls short on its investments, and if retirees live longer than expected.

Both Orange and Santa Ana, like many Orange County cities, have massive unfunded pension liabilities which increased by hundreds of millions of dollars over the last decade due to factors like, in Santa Ana specifically, pay raises for police officers.

Santa Ana’s combined unfunded liability for all employees is around $707 million, according to a presentation at the council’s Feb. 2 meeting by Finance Director Kathryn Downs.

Around $404 million of that amount comes from the city’s pension liability to “sworn safety employees,” which includes police officers.

And the interest builds on that liability.

Orange City Council members on Tuesday will decide whether they want to issue a bond not exceeding $292 million, to pay off what officials say will be 100% of their unfunded liability.

“The most viable option, and the option that has the greatest potential savings, is the issuance of Pension Obligation Bonds (POBs),” staff said in a report attached to the agenda for the City Council’s meeting.

Santa Ana officials largely welcomed the idea when given a report on it by Downs, who estimated the city could cut the interest rate they owe to CalPERS in half by issuing the pension obligation bonds.

Issuing a bond could produce annual savings of up to approximately $3.8 million to the city, according to staff.

Staff there will come back with an actual ordinance at a later date.

“It’s a path to save the organization and the city quite a bit of money, realizing these pension debts are continuing to increase,” said Mayor Vicente Sarmiento at the City Council’s Tuesday, Feb. 2 meeting.

And in a labor-friendly city like Santa Ana, officials indicated that finding a way to save money and pay off the CalPERS debt could send a positive message to workers who look forward to retiring.

“I really do believe everybody deserves a plan for retirement,” said Councilwoman Thai Viet Phan at the meeting. “Especially folks who have dedicated their lives to public service.”

All city employees also pay varying percentages of their paychecks into their plans, Downs said.

But the idea is met with criticism by some fiscal conservatives like John Moorlach, who say the strategy amounts to a gamble based on a number of factors and — before the pandemic — even tried to get a state bill passed requiring certain pension bonds to go before voters as ballot measures.

“Failing to achieve the targeted rate of return burdens the issuer with both the debt service requirements of the taxable bonds and the unfunded pension liabilities that remain unmet because the investment portfolio did not perform as anticipated,” the association states.

Moorlach said that if the cities stay with CalPERS, they at least are in a flexible position with their “soft” debt to where they could renegotiate future payments should they find themselves in a fiscal predicament.

Additionally, Downs at the Santa Ana meeting said that if the city issued the bonds but CalPERS outperformed its investment return assumptions, “the debt will not decrease.”

Though she pointed to the agency’s average investment returns over the past several years, which undershot those assumptions.

Downs at the Santa Ana meeting said the city could mitigate the risks involved with pension bonds by issuing a bond of less than 100% of the unfunded debt. For example, she recommended the city issue a bond that didn’t exceed 90% of the city’s pension debt.

Other options outside of pension bonds, Down said, involve paying down a bulk of the city’s liability over a shorter time span to avoid higher payments due to interest rates.

Both Santa Ana and Orange studied the issue through the same financial consulting firm, Urban Futures.

At the end of the day, officials in Santa Ana agreed something must be done.

Required contributions to CalPERS are growing faster than the city’s revenues, Downs said, and are estimated to grow more than 40% over the next seven years.