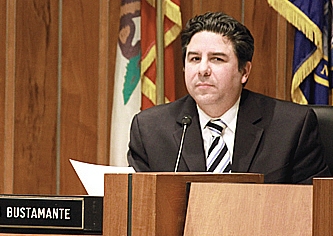 Orange County government officials have referred to District Attorney Tony Rackauckas an internal county investigation of sexual harassment allegations against Santa Ana Councilman Carlos Bustamante that were lodged while he was an executive at OC Public Works.

“We did get the complaint,” said Rackauckas’ chief of staff, Susan Kang Schroeder, late Tuesday. “We’re reviewing it.”

County Counsel Nick Chrisos wrote to Rackauckas last week, referring the results of a confidential report from the county’s internal auditor about the allegations against Bustamante, who had been seen as a rising Latino star in the Republican Party.

Bustamante, who maintains his innocence against the allegations, resigned from his $178,277 job last October after an internal county probe concluded.

In September, the Orange County Register reported on a string of anonymous letters sent to county officials alleging that Bustamante had traded promotions for sex with his subordinates.

One letter alleged specific details about four “current and former female OC Public Works employees” and warned supervisors that department directors were aware of the situation and turning a blind eye.

Peter Hughes, the county’s internal auditor, also apparently came to the conclusion that senior officials inside the county bureaucracy knew about the situation but didn’t follow established protocols in their response.

According to sources close to the situation, Human Resources Director Carl Crown stonewalled Hughes when the auditor sought more information on the matter, apparently withholding an internal legal investigation into the case.

OC Public Works Director Jess Carbajal also has come under scrutiny for his lack of action when the original allegations against Bustamante surfaced more than a year ago.

And last week, county CEO Tom Mauk was grilled by county supervisors, who were enraged when they got the Hughes audit report on March 2. Mauk and county Supervisor Bill Campbell, a Mauk ally, were out of town the Friday that Hughes’ report landed.

The four-page audit report triggered a tense closed-session discussion March 6, the following Tuesday, which was questionably listed under “anticipated litigation.” Supervisor Janet Nugyen, another Mauk ally, pressed for a delay in further consideration of the matter until Monday.

Shortly after that meeting, Chrisos sent his letter to Rackauckas.

On March 8, Voice of OC published an article detailing the Bustamante controversy.

The next day, county supervisors met in an emergency closed session on the matter but didn’t report any action. Supervisors had their first chance to meet face to face with Mauk on Monday, meeting privately under the rationale that they were assessing his performance evaluation. They also concluded Monday’s meeting without reporting any decisions taken.

On Monday, all supervisors read from the same prepared text, alluding to the brewing scandal by acknowledging that “the board learned of an investigative report, prepared at the behest of the CEO by an outside attorney during September of last year that assessed claims of sexual harassment/misconduct that were alleged in anonymous letter to the board, media and county staff.”

Mauk has himself come under criticism from supervisors about the delay in action by top officials. There are questions aimed at Chrisos about whether concerns were properly relayed to his office. And there is now considerable pressure on Mauk to fire officials like Crown, who is retiring in May, and Carbajal.

“The board has directed the CEO to reassess the need for disciplinary action and any additional review as a result of the Internal Audit and outside investigator reports,” read the board statement.

According to sources close to the situation, supervisors have since softened their stance toward Mauk but remain insistent that some discipline and accountability should be enforced at top levels.

“We’ve got a mess on our hands,” said Supervisor Shawn Nelson, who oversaw the response to a scathing performance audit of the human resources department last year. “Human resources is a mess.”

Nelson acknowledged the tension with Mauk but said supervisors remained committed to him as long as Mauk remained engaged.

“I wouldn’t classify it as a storm. I want to work with my CEO to make this a well-run place,” Nelson said.

Supervisors Chairman John Moorlach also acknowledged the difficult discussions of the Bustamante allegations in weeks past but wouldn’t comment on specifics. He did say all audits like the probe into Human Resources and the Bustamante affair showed that “we’re taking critical looks at ourselves.”

Moorlach declined comment on the referral to the district attorney, adding only that “I’ll let the system do what it’s supposed to do.”