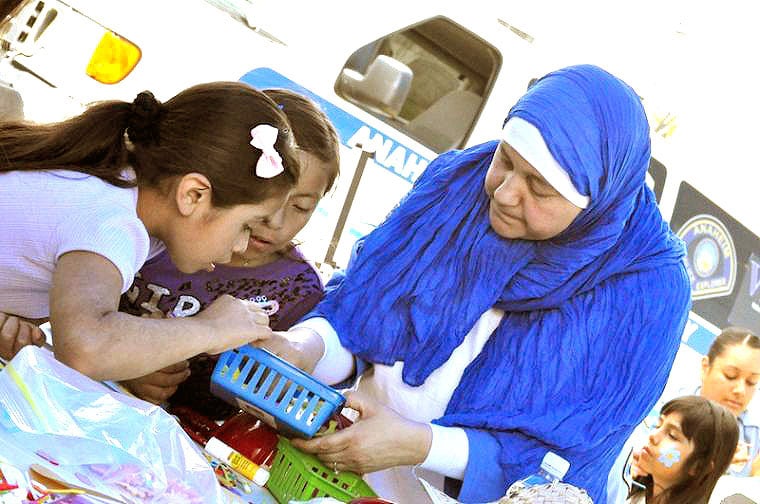 In many ways, Anaheim’s Latino neighborhoods and the city’s Arab enclave, known as Little Arabia, face the same challenges — lack of resources and neighborhood amenities, language and cultural barriers, discrimination and unsafe streets.

Leaders of the two groups have historically focused on their own communities’ problems rather than working together. But a safety fair Saturday in one of the city’s poorest Latino neighborhoods — organized by the nonprofit ACCESS California Services, which typically serves Muslims and Arabs — was a step toward building unity and trust between the two communities.

“They were very welcoming to us,” said Rida Hamida, programs director at the nonprofit. “With my broken Spanish, we connected with them.”

The safety fair at Miraloma Park was a typical family event. Anaheim Mayor Tom Tait spoke about the need for neighbors to know and help each other in crises. Firefighters dolled out plastic firefighter helmets. There was an arts and crafts table, children exploring police vehicles and fire trucks, a pickup soccer game and a lot of youthful fascination with a police horse.

But in the midst of the mostly Spanish-speaking residents, there were women wearing colorful Islamic headscarves known as hijabs. There were also war refugees from Iraq and Afghanistan and a slight, 18-year-old Somali refugee, who kicked around a soccer ball with the Latino kids and was still getting used to the concept of shaking hands.

“This is how we teach them [refugees] to give back to the community,” said Nahla Kayali, executive director of ACCESS California Services Executive Director. The nonprofit is the only organization under contract with the county to provide refugee services, according to ACCESS officials.

For leaders of the nonprofit, helping their Latino neighbors is a religious duty, Hamida says. But building a relationship also pays dividends on other levels.

Interaction between the two cultural groups ultimately means less fear of Muslims, Hamida says. With the news just unfolding that the bombing suspects of the Boston Marathon were Muslims of Chechen origin, combating terrorist stereotypes remains an uphill struggle.

“We’re all human beings, and we all have a right to safety,” Hamida told the crowd after acknowledging the Boston tragedy.

The Mira Loma neighborhood has one of the highest crime rates in the city and was identified by a commission studying Anaheim neighborhoods as being most in need of services like libraries and community centers, Hamida said.

But the neighborhood is seeing some progress. Plans of a community center at the park — a skating area, picnic tables and a new entrance ramp so residents no longer must walk down a hillside to reach the place — were displayed at the event. Construction is scheduled to begin in the summer with an opening date projected in about a year, according to city officials at the event.

Lt. Tim Schmidt, an officer with the Police Department’s gang-suppression unit and with Cops 4 Kids, a police program that brings youth services to neighborhoods, said having Latinos and Arabs together in one event was unprecedented.

“It’s just a start, but it makes interaction that much easier,” Schmidt said.

In fact, there have been signs for some time that Latino, Muslim and Arab groups have been cooperating in a drive for more political representation on the Anaheim City Council.

The American Civil Liberties Union has sued the city on behalf of Latino activists who allege the city’s at-large council election system violates the California Voting Rights Act, which mandates adequate representation of minorities. Anaheim is 54 percent Latino, but few Latinos have served on the City Council.

It isn’t just Latinos who have had little success attempting to field council candidates. Although candidates don’t often emerge from Little Arabia in West Anaheim, Arab-American Bill Dalati ran for council in 2006 and 2010. He lost both times.

Muslim representatives have appeared at events in support of council districts, the system the ACLU has proposed, which would have residents vote only for representatives of their districts. Such a system would result in representation for all of Anaheim’s geographic areas instead of just the primarily wealthy areas where current council members reside.

“It’s not a movement that began this year,” Hamida said. “It’s always been there.”