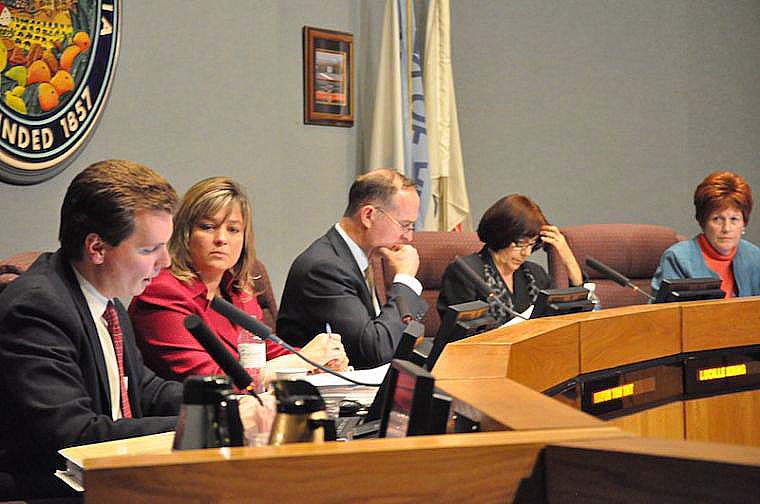 The Anaheim City Council Tuesday night rejected an advisory committee’s recommendation to have voters decide whether to change the city’s electoral system so council members are elected by districts.

The council instead proposed a city charter amendment requiring council members to live in the neighborhoods they represent.

Mayor Tom Tait had proposed placing council districts, whereby residents could vote only for the council candidates in their districts, on the ballot and increasing the size of the five-member council to either six council or eight council members and a mayor.

Tait’s proposal was rejected in a 3-2 vote, with Councilwomen Kris Murray, Gail Eastman and Lucille Kring voting no. Councilman Jordan Brandman joined Tait in voting for the option.

Instead, the council majority by a 4-1 vote with Tait dissenting signed off on Murray’s proposal to draft a charter amendment for the June 2014 election that would keep the city’s at large council election system but require candidates to live in districts. The charter amendment, which is to go to a council vote at a future meeting, would also increase the council size to six members with a mayor elected at large.

The decision to reject council districts infuriated a group of activists at the council meeting who have been pushing for the change over the past year. They marched out of the council chambers chanting “no fake districts, no more delays” and shouted “We’ll be back” outside City Hall.

The fight over the city’s election system is at the heart of a lawsuit filed by the American Civil Liberties Union on behalf of Latino activists, who allege that at large council member elections disenfranchise the city’s Latinos and violate the California Voting Rights Act, which requires adequate representation for certain minority groups.

Although 54 percent of Anaheim’s populace is Latino, all five council members are non-Latino and reside in middle-class or affluent neighborhoods.

Activists argued that lack of representation has led to unfair distribution of city resources such as parks, community centers and libraries. Racial and class tension that has been decades in the making exploded in a downtown riot last summer after a string of police shootings.

With council districts, Latinos could elect council members from their working-class neighborhoods and have an intimate understanding of their community’s needs, supporters say.

Opponents of council districts said that the election system will further divide the city and cause legislative gridlock, with council members warring for distribution of city resources. They also argued that the lawsuit and proposed remedy is inherently racist, implying that a council member must be Latino to represent Latinos.

Jose Moreno, president of the grassroots Latino group Los Amigos of Orange County and a plaintiff in the ACLU lawsuit, said the residency requirement the council will consider wouldn’t solve the problem raised by the lawsuit. Because candidates would still be elected at-large, residents from other areas of the city would still be electing council members, regardless of where they are required to live.

“You may get some Latino candidates elected, but it won’t be Latinos that elect them,” Moreno said.

Last night’s council decision would be crucial to the lawsuit. An Orange County Superior Court judge last April allowed the city to postpone the lawsuit until July 9 so the advisory committee and council could devise a legislative solution. It isn’t yet clear whether the judge will view the residency requirement as a solution to the lawsuit’s complaint.

Tait said that the lawsuit has cost city taxpayers $500,000 so far and indicated that the city will most likely lose the lawsuit. Tait went on to predict that the council majority’s choice to deny Latinos fair representation will be costly to the city.

“I just want to voice my support for districts. I believe that is the right direction for Anaheim to go,” Eastman had said.

At last year’s council meeting, the council majority — then consisting of Eastman, Murray and Councilman Harry Sidhu — also said that the issue needed more study before they could put the issue before voters.

Kring said after last night’s meeting that she changed her mind because she learned that districts would “Balkanize” the council and make it dysfunctional. Eastman said she wasn’t ready to allow voters to decide on council districts, because a citizens advisory committee couldn’t come to a consensus on whether council districts were a good idea.

“I think we still have homework to do. I’m not ready to support this particular proposal tonight,” Eastman said.

From the beginning, members of the 10-person advisory committee, who were appointed by council members, split almost evenly. For the most part, the committee members held the same views as the council members who appointed them.

The committee members often fought, accusing each other of representing special interests — essentially unions versus Disneyland.

And although the advisory committee’s report unanimously recommended placing the question of council districts before the voters, committee members against districts had claimed that the bloc favoring districts had hijacked the process.

The anti-districts bloc favored the residency requirement as a compromise.

After seven months of study by the committee, Murray said, the committee still hadn’t studied the issue enough. She suggested that the recommendation to increase the council size was arbitrary and based on the whims of committee members, rather than a thought-out, data-driven conclusion.

At one point, Murray also sparred with Moreno over the dynamics of race and politics. She asked whether Moreno believed that ethnic communities could elect anybody, regardless of ethnicity, as their preferred candidate, and Moreno replied that they could. Murray noted that Brandman, a white Democrat, had received strong backing from Latino precincts in the last election.

Murray said that the residency requirement was a fair compromise between districts and at-large systems. “I believe this is a middle ground. I believe in governance you have to sometimes find a middle ground to move our city forward,” she said.

Tait agreed with activists’ contention that the residency requirement doesn’t solve the issue raised in the lawsuit. He said the city’s current power structure — an elite, Disney-aligned group that spends hundreds of thousands of dollars in campaign cash to influence the outcome of council elections — would still elect candidates uninterested in the plight of working-class Latinos, regardless of where they are required to live.

Backers of council districts believe that the system would drastically reduce the influence of campaign money around election time, which is typically the season for an avalanche of expensive campaign mailers. Instead, candidates could simply walk their districts to be elected, supporters said.

“Because of at large elections in Anaheim, it’s a very expensive proposition to run for council, which makes the influence of special interests much stronger,” Tait said. “The residency requirement doesn’t change that.”