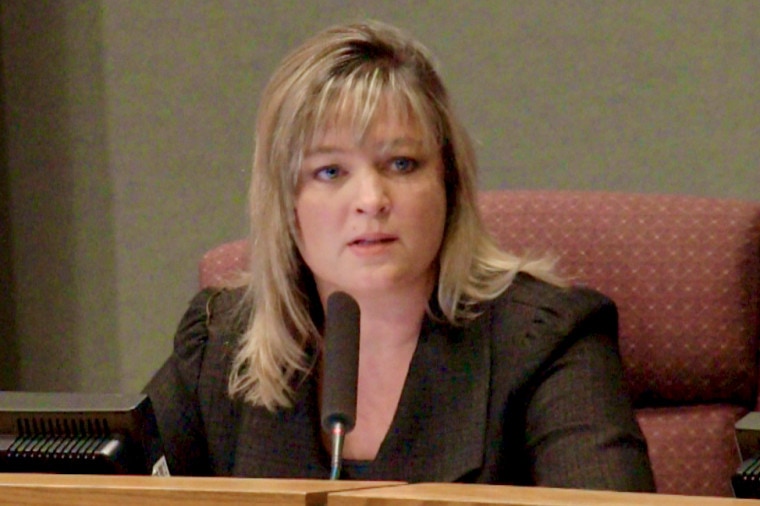 Kris Murray, now a regional water official, during her time on the Anaheim City Council.

The Anaheim City Council Tuesday night unanimously decided to step up code enforcement on rental housing under a new program that city leaders said is meant to go after slumlords who prey on poor residents.

Councilwoman Kris Murray said she was inspired to pursue irresponsible property owners after visiting a family of eight that was living in appalling conditions, with vermin and odors so profuse a neighbor was affected.

When Murray and Councilwoman Gail Eastman visited the home, a code enforcement officer there told them that the scene was common, Murray said. The two council members said they were alarmed.

“Tonight is about making sure those who flagrantly ignore laws for the health and safety of our residents are held accountable,” Murray said. “This issue tonight is about quality of life, no question.”

Some critics have argued, however, that the true intention of the policy is to oust poor residents.

OC Weekly’s Gabriel San Roman wrote that a questionnaire issued to property owners — the initial step of the program — includes queries such as whether landlords take action when they find people living in their units but not listed on the rental agreements.

San Roman pointed to the questionnaire as evidence that the program is “really just an effort to boot low-income residents under the guise of addressing overcrowding. And not giving an actual shit about the poor, of course!”

Greg Diamond, a blogger and frequent critic of the council majority, echoed San Roman’s comments at the meeting.

The owners must complete the questionnaire and send it back to the city within 60 days. If they don’t use at least 90 percent of “common management techniques” or don’t meet “minimum standards,” then officials will be visiting the properties for interior inspection, according to a staff report.

City leaders insisted that state law bars them from imposing or enforcing occupancy limits so that residents have nothing to fear. Residents and property owners can refuse entry to inspectors, with the city having to pursue a court order in those situations, they said.

Murray said she didn’t support the questionnaire and indicated that it is subject to change.

Planning Director Sheri Vander Dussen said that families will be temporarily relocated during repairs under severe circumstances and that in the past there has only been one instance of such a move.

City officials will be focusing on older units; Murray suggested an amendment to focus on those built more than 20 years ago. The city will begin the program on the west side of the city, gradually moving east into the center, Vander Dussen said at the meeting.

Mayor Tom Tait said he also supported the program but cautioned that city leaders must be careful not to unintentionally raise rental rates on poor families. He said that scrapping a previous across-the-board $16 fee for all property owners was a good idea.

“This is something that’s needed, but we have to be careful of the unintended consequences of raising rents on well-run apartments,” Tait said.