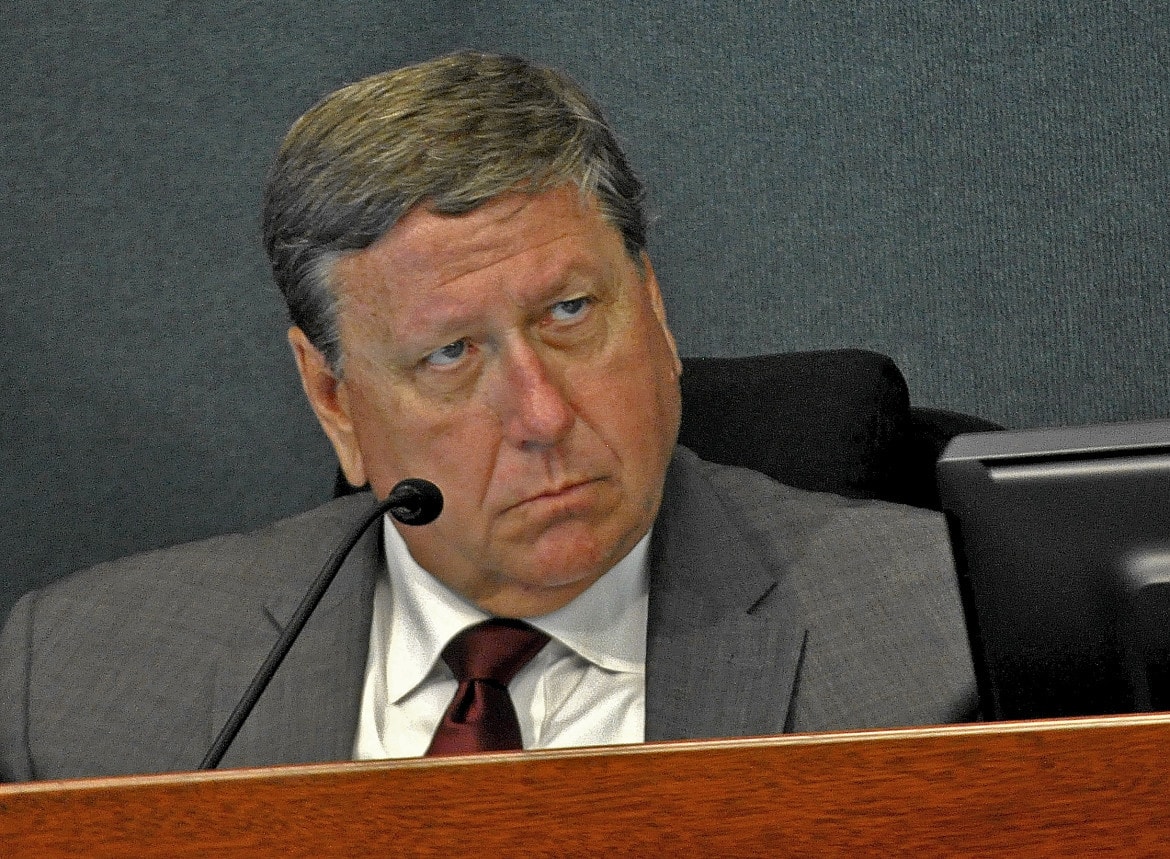 Richard D. Jones at a city council meeting in Westminster.

Following a lengthy review, the California Public Employees’ Retirement System (CalPERS) has determined that Westminster City Attorney Richard D. Jones was never entitled to a state pension through his position and is reversing more than 22 years of his pension payments.

In December, Voice of OC reported on a controversial arrangement between Jones and Westminster, whereby he was granted status as a full-time employee with a $210,000 salary and allowed him to pay into a state pension. This despite a roster of outside commitments that made it impossible for Jones to spend as much time at City Hall as his timecards indicated he did.

Voice of OC’s reporting prompted CalPERS to launch a review. On Monday, the agency issued a letter stating that Jones has “never qualified for” membership in the pension system through his position at Westminster.

Jones performed part-time services for up to 30 hours a month or 960 hours a year, just shy of the state minimum for a full-time employee, 1,000 hours a year, according to the CalPERS review.

CalPERS also determined that because the city has never established the office of city attorney, Jones is operating as an independent contractor and is specifically excluded from receiving a pension.

Read the full letter from CalPERS.

In his own defense, Jones has said that in 1991 then-Mayor Charles Smith approached him with an opportunity to enter the pension system before a change to state pension rules that would exclude contract city attorneys.

Jones said during this timeframe he received verbal assurances, in the form of two phone calls with CalPERS representatives, that he would be eligible for a pension, and that he and other contract city attorneys were grandfathered in before the changes to the law were implemented.

“I believe then and probably now there are still contract city attorneys who were allowed to participate in PERS in the late 80s and early 90s,” said Jones on Thursday. “I do not disagree that it can’t be done today.”

Jones continues to defend the arrangement as cost-neutral for the city of Westminster because “all funds paid to PERS were my dollars and that the city has no investment of public funds.”

Under the terms of that agreement, Jones received a salary paid to him every two weeks with no vacation or sick time or other benefits. At the end of every month, his two-week salary was deducted from the city’s bill with Jones & Mayer, his law firm that provides the city’s legal services.

At the end of every fiscal year, Jones also received a bill from the city’s finance department summarizing the total city expenses for his PERS retirement, Medicare tax and workers’ compensation — which totaled $46,174 for the 2014-15 fiscal year. He paid that bill each year in three installments.

“No city funds have ever been expended and the city has suffered no harm or financial loss,” Jones wrote in an email Thursday.

Both Jones and City manager Eddie Manfro said they could not comment specifically on the letter because they have yet to receive it from CalPERS.

Regarding the overall issue, Manfro said: “This arrangement continued for 22 years and has only recently been challenged by CalPERS. The City and Mr. Jones will comply with whatever determinations are ultimately made final by CalPERS.”

Jones is entitled to appeal the decision, although he said Thursday that he has not decided whether he would pursue that option.

If he loses an appeal or chooses not to make one, Jones will lose 22 years of pension credits through Westminster, although he is still entitled to receive a pension through a position as a former school board member at the Lowell Joint School District in Los Angeles County.

Jones has 15 years of service through the school board and is still an active member, according to CalPERS spokeswoman Amy Morgan.

Both CalPERS and the city of Westminster could not immediately provide an estimate of how much money would be returned to Jones.

According to Morgan, the state agency will return funds back to the city and it will be up to Westminster to return any contributions back to Jones.

Beyond the pension issue, there are other unanswered questions regarding the legality of Jones’ arrangement with the city.

Despite his “full-time” designation on city payroll, Jones never worked out of City Hall and had a number of other commitments, including serving as a contract city attorney for the cities of Fullerton, Whittier and La Habra. His firm Jones & Mayer also contracts with dozens of public agencies across the county and state.

How much and where Jones works does matter in how the state and IRS distinguish between independent contractors and full-time employees.

Time cards submitted by Jones between March 2011 and May 2013, showed that he logged an identical schedule every week for nearly three years, working nine-hour days Monday through Thursday and four hours on Fridays, for a total 40 hours a week.

Manfro said the time card system was only used as an accounting tool for a few years so that the finance department would know to pay Jones on a bi-weekly basis, although that practice was eventually discontinued.

Morgan says there’s no penalty for the city or Jones for erroneously enrolling him in the pension system, aside from the loss of his pension.

However, the DA found “no evidence of criminal conduct on the part of Richard Jones,” according to an October letter sent to Wagner by Senior Deputy District Attorney Brock Zimmon.