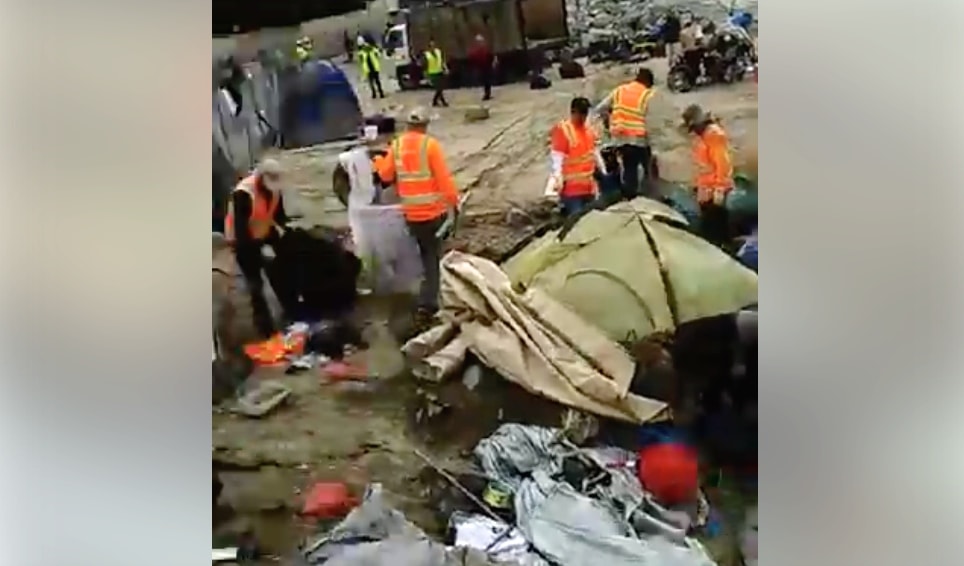 Workers clear out a homeless encampment along the Santa Ana River on Feb. 8, in a screenshot of a Facebook live stream by Danny Somerville.

A stream of angry residents showed up to the county Board of Supervisors meeting Tuesday to demand that supervisors stop the evictions of homeless people who are camped along the Santa Ana riverbed until housing options are available.

Advocates, including the American Civil Liberties Union of Southern California, have been protesting the county’s actions to evict people from the riverbed as part of a project to replace a homeless encampment with boulders and sand for public works projects.

And in recent days attorneys with the ACLU and other groups have filed lawsuits to stop the evictions and seizures of property. The scene at the supervisors’ meeting, with 18 people speaking during the public comment portion, is yet another indication that this issue will not be dying down soon.

Among the speakers was Atty McLellan, a student at Chapman University, who said she and other students are “outraged” at how county officials are treating homeless people at the riverbed. “It’s just another lucid attempt to try to hide the growing homelessness problem in Orange County,” she said.

Officials have been seizing people’s property when they’re away accessing food and medical treatment, advocates say, with new county fencing requiring disabled people to walk a mile to the nearest opening to leave the encampment.

“Our clients are treated with less respect and have less security than the pile of boulders” that have been placed there, said Sabyl Landrum, an attorney with the Legal Aid Society of Orange County.

The county crews are working at a section of the riverbed between Chapman and Orangewood avenues, in the city of Orange. The people who were once camped there have either moved to the other side of the river or further down, away from the county workers, a Voice of OC reporter observed Tuesday afternoon.

There has been a palpable sense of confusion in recent days, as activists, spectators, reporters, workers and sheriff’s deputies visited the riverbed with no one seeming to know what will happen next.

Under the bridge at Chapman Avenue, some people continue to camp in the dry riverbed itself, with a path of wooden pallets acting as a makeshift bridge over a large pool of water to the rocky bank.

At the supervisors’ meeting, advocates said supervisors should stop the evictions until they make more serious progress in their plan to end homelessness, which calls for expanding permanent affordable housing with support services. Supervisors have devoted very little county discretionary spending toward the effort, they said.

“It is shameful what you’re allowing” to happen in the riverbed, said Anaheim resident Jeanine Robbins. She said she called the office of Supervisor Shawn Nelson, who represents her area, last week and was assured he would get back to her by the end of the week. But that didn’t happen, despite her follow-up calls, she said.

“I live in his area, and I cannot get [a hold] of my representative,” Robbins said. “The public is quickly losing faith in this board.”

Despite the comments from their constituents, none of the five supervisors – who were all either present at the meeting, or in Nelson’s case participating by phone – responded to their concerns. The only reaction was stern warnings from Chairwoman Michelle Steel to audience members, telling them not clap for the speakers.

In their response to the lawsuit filed by the ACLU Friday, county officials dispute claims that their fencing has trapped homeless people, and Nelson has called such claims “dishonest” and “ridiculous.”

The case is now before U.S. District Judge David O. Carter, who was scheduled to decide Thursday morning whether to issue an emergency restraining order against the county. That hearing, however, was cancelled Wednesday amid talks between the ACLU and the county.

Meanwhile, the county officials are facing a second lawsuit over their handling of the riverbed evictions, which was filed Monday by attorneys Carol Sobel, Brooke Weitzman, and others.

The suit, on behalf of Tammy Shuler and other homeless residents of the riverbed, argues that the county has illegally “seized personal property and largely destroyed it without an opportunity for the rightful owner to reclaim it,” in violation of rulings by the U.S. 9th Circuit Court of Appeals.

The suit alleges that when the county seizes property, the county requires its owner to travel 22 miles away to a location in Lake Forest to pick it up. And the pick-up center “is only open one hour on one day a week, and then only by prior arrangement.”

Weitzman told supervisors Tuesday that the county’s notice posted in riverbed “has the wrong address” for where to pick up property. “This is unreasonable and inhumane,” she said.

She also represented homeless people in a case that led to a 2012 ruling by the 9th Circuit that placed restrictions on government’s ability to seize homeless people’s possessions.