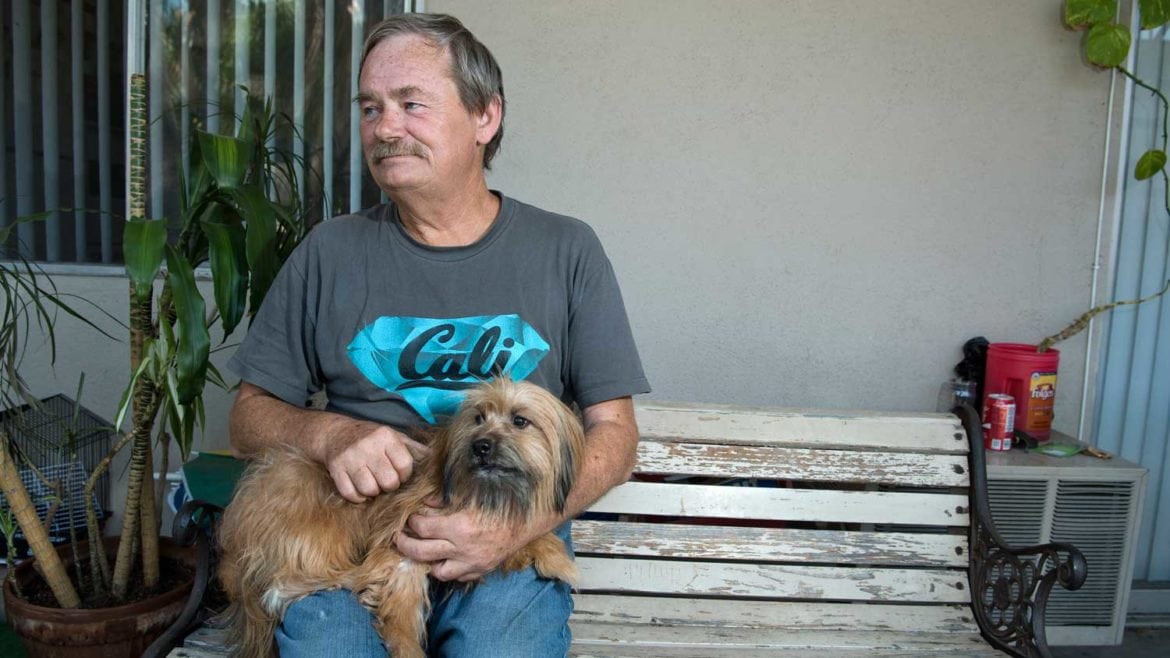 Donald Meade, a former resident of the homeless camp at the Santa Ana downtown Civic Center, holds his 2-year-old mix-breed dog, Scrappy, as he sits on a bench on the front patio of his one-bedroom apartment in Fullerton on Friday, July 7, 2017.

In August 2015 Amy DePaul wrote about new approaches to helping the homeless for Voice of OC.

“The approach, dubbed “housing first,” focuses on placing people a home, and then offering the psychiatric and logistical services that would help them improve their health and well-being,” DePaul wrote.

Her article featured Donald Meade, a once drug-addicted man who battled cancer and chronic heart problems while living on and off in downtown Santa Ana’s Civic Center, along with hundreds of other homeless people. DePaul shared how Meade, thanks to the Illumination Foundation, had been placed in a one-bedroom apartment in Fullerton and was being aided through recovery.

Flash forward to April 2017. After 18 years Ashley Roberts of Ravenna, Ohio, and her brother Bradley Meade had gotten a lead on the whereabouts of their father.

Their father was that same Donald Meade DePaul had chronicled.

They read about their father’s battles with alcoholism, homelessness and illness, including bypass surgery, cancer and heart disease. They stared at the picture, which showed a weathered face, blue eyes and grey hair with remnants of auburn in his moustache.

“He still looks like Dad,” Roberts told her brother.

The family has since connected, with Meade traveling for a visit to Ohio to see his children after two decades – along with grandchildren he is meeting for the first time.

This story is just one of many that DePaul has written for Voice of OC. And she will be doing more of this type work as she is now advancing to the position of community health editor for Voice of OC.