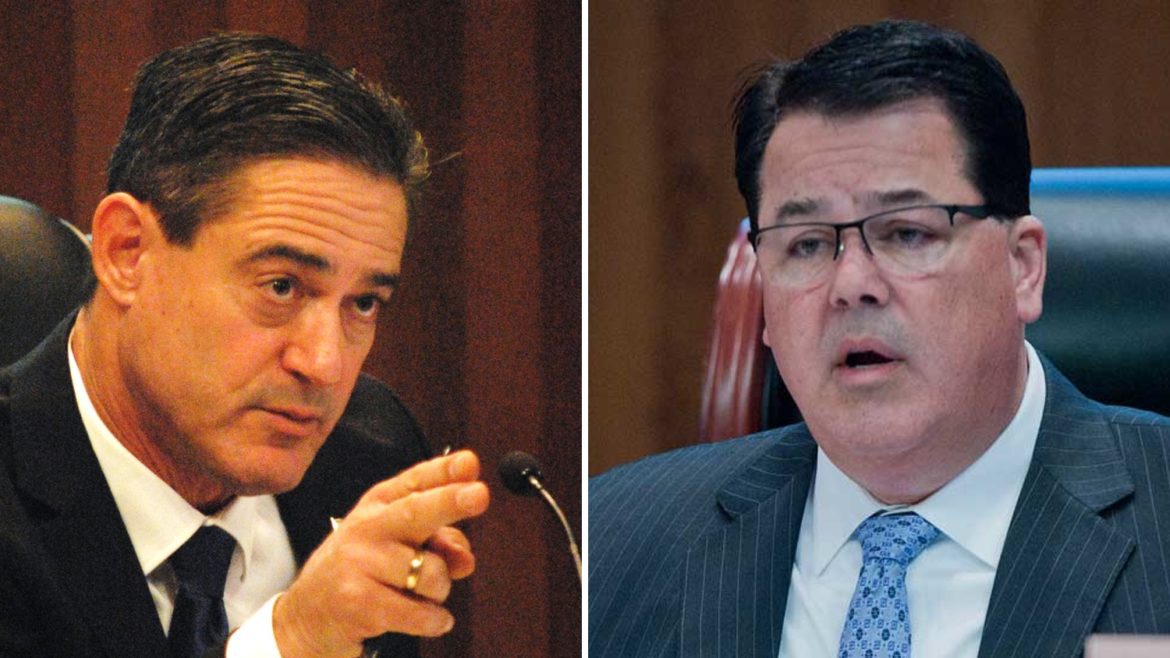 Supervisors Todd Spitzer and Shawn Nelson said they are opposed to a proposal by south Orange County mayors to put a new homeless shelter on county-owned property in rural Silverado Canyon.

Nelson said south county mayors need to look in their own cities for a shelter site, closer to medical services and jobs.

“Putting the homeless out in a canyon somewhere so the [south county] cities can avoid dealing with the issue is not realistic or reasonable,” Nelson said in a text message Sunday to Voice of OC.

“This is exactly the problem we have been having since I got involved in trying to locate shelters [seven] years ago. Everyone wants to act like they are helping but no one thinks the solution should be anywhere near them. The solution will need to be a site actually ‘in town’ like all the others. There is no easy option to just ship the homeless somewhere out of sight.”

“The challenge,” he added, is to find a site “in town” near jobs, stores, and medical facilities, among other places.

Use of the former Silverado Elementary School, which now hosts a public library and a pre-school, as a homeless shelter would, at minimum, require support from three of the five supervisors.

Two others – Andrew Do and Michelle Steel – have so far declined to publicly say if they support or oppose it. And one supervisor, Lisa Bartlett, said the site should be studied further to see if it’s feasible.

“I understand the urgency to house the homeless, but placing them in a brand new $6.8-million project built for families perhaps is not the answer,” said Spitzer, whose district includes the proposed site, in a news release Friday evening.

“Any place that has ‘Baby & Me Storytime’ should not be under consideration. In addition, the state has designated this area a ‘Very High Fire Hazard Severity Zone.’ ”

Spitzer seemed to leave a potential door open, saying “more study is needed” before officials decide to place shelter there. But his news release didn’t say he wanted that study to take place, nor what he believed it should look into.

The 11-acre Silverado property has been owned by the county government since 2013, following the school’s 2009 closure, and currently hosts the Library of the Canyons and a nature-themed pre-school. It is in unincorporated county territory, outside of any city, and about a 2.5 mile-drive west of the community of Silverado.

In a letter to the county Friday, south county mayors proposed placing 20 sleeping cots in each of the three former classrooms, for a total capacity of 60 people.

“The site also includes several large paved and turf areas that could be utilized for additional bed capacity and/or support services,” they wrote, including “mobile services for health and social services.”

“The Mayors of [South Orange County] are ready to take all steps necessary to move forward expediently with the site as an emergency homeless shelter.”

[Click here to read the mayors’ letter about their Silverado proposal.]

Bartlett, whose district includes most of South County, is the only supervisor to publicly say she supports looking into the site. She said the location was proposed by south county mayors and the county should follow up by analyzing it.

“The county now needs to prepare a feasibility analysis which would include a number of factors including what else is in the immediate area, transportation, services, etc.,” Bartlett said in a Sunday text to Voice of OC.

Do and Steel didn’t return text messages over the weekend asking if the support or oppose the Silverado proposal.

The south county mayors proposed the Silverado site Thursday, April 19, in response to pressure from U.S. District Judge David O. Carter for city and county officials to collaborate on creating additional shelter beds in south county to off-set over crowding at existing shelters.

Among the problems he cited: Women’s beds put in men’s sleeping areas due to a lack of space, people with serious mental illnesses being triggered by extremely crowded conditions at the Courtyard shelter, and women being told by county officials their option was to stay at an already-over-capacity shelter with men who they say sexually assaulted them.

The judge has said the city of Santa Ana has done its share to host emergency homeless shelters and services, and that it’s time for other cities in Orange County to step up with a “proportional” share of services.

If the South County mayors don’t find a location for a new shelter, Carter said he would “follow the law” in the U.S. 9th Circuit’s Jones decision and ban cities from enforcing anti-camping laws against homeless people until adequate shelter capacity was available.

They said those cities supported a double standard: It’s okay to put shelters near poor kids in Santa Ana but not near kids from wealthier families.

The county’s largest homeless shelter, known as the Courtyard, is one block from a high school in Santa Ana – NOVA Academy – and four blocks from Santa Ana High School. The Courtyard shelters about 400 homeless men and women.

One idea considered by the South County mayors is splitting the shelter into multiple smaller sites within South County cities.

Three cities’ mayors have identified smaller sites in their cities as potential shelters if Carter prefers it, according to Irvine Mayor Don Wagner.

Lake Forest Mayor Jim Gardner, who has a doctorate in clinical psychology and worked as a therapist, said smaller environments make more sense for people, including homeless people.

“The large congregate [shelter] model presents problems of danger and anxiety to individuals who are already at risk. It isolates the homeless from the greater community, reinforcing their stigmatization and dehumanization, and making their transition even more difficult,” Gardner wrote in a paper he said he presented to the other mayors last week.

“The alternative to the large congregate housing model is a distributive system, not unlike the group home movement, in which small numbers of people are integrated into the broader community.”

“I believe that if the number [of beds needed in south county] is around 300 people then one large shelter may be best, all things considered.”

One problem mayors on both sides of the Silverado issue agreed on was that there was no clear answer about how many shelter beds are needed in south county.

“I’ll be honest, one of my frustrations coming out of the meeting today was an inability of anyone to say, ‘Here’s how many beds you need.’ Wagner told Voice of OC after the mayors’ meeting Thursday.

Gardner said there were no answers at the mayors’ meeting, including from county homelessness czar Susan Price, regarding how many additional shelter beds are needed in south county.

Asked about this Sunday, Price replied via text message: “No one was dictating a specific number, although [Judge James L. Smith] said up to 400 [beds,] which seemed to be a high number.” Smith was Carter’s representative during the mayors’ meeting.

“The shelter bed number is predicated on what site is chosen and should be balanced with the various exit strategies, including housing unit developments,” Price added.

She didn’t respond to a follow-up text asking how many additional shelter beds are needed in south county and across the county.

In doing so, they said Spitzer violated “district prerogative,” an unofficial, longstanding “honor code” that gives supervisors control over what the county and other supervisors do in their districts.

Do, the supervisors’ chairman, declared district prerogative to be dead at the end of an April 10 discussion where Spitzer’s colleagues openly criticized him and defended their territory.

“So now we know, there is no district prerogative, and we’ll do what ever we want. Okay?” Do said. “That’s clear.” Spitzer later said it was a warning directed at him.

Through his news release Friday, Spitzer said he wasn’t invited to the mayors’ meeting where the new shelter site was proposed.

“The decision was made to utilize part of the building during a Thursday meeting with a dozen South County mayors and Supervisor Lisa Bartlett. Spitzer was not invited to the meeting and did not provide any input because it was unnecessary,” his news release said.

The supervisors have their next public meeting at 9:30 a.m. Tuesday, where canyon residents are planning on speaking in opposition to the site. An online petition against the Silverado proposal received more than 1,600 signatures over the weekend.

“Our recommendation is to study the homeless population recently removed from the Santa Ana river bed to assess percentages of services/beds required and have each of the 34 cities and unincorporated areas provide their fair share of the number of necessary beds based on a percentage of per capita residents in their jurisdictions,” the petition states.

The meeting starts at 9:30 a.m. at the county Hall of Administration in Santa Ana.