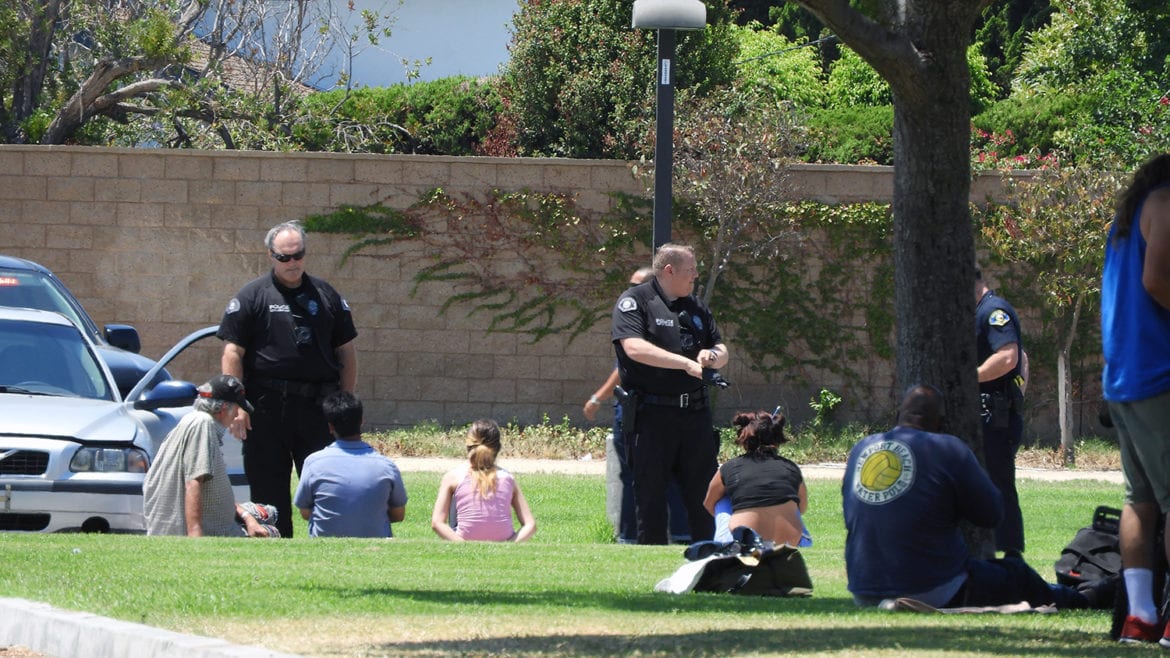 Officers detain and question people at Maxwell Park, including a homeless man who was picked up by people driving the car. Aug. 3, 2018.

West Anaheim’s Maxwell Park is facing a spike in homeless people staying in and around the park and homeless-related crimes, according to Anaheim Deputy Police Chief Julian Harvey.

Harvey presented an analysis of crime and homeless-related crime at the Aug. 14 City Council meeting. Most of the increase is from illegal drug use and the park most affected is Maxwell Park.

“The percentage of calls involving homeless in our parks in increasing,” Harvey told the council during his presentation. “Homelessness on the westside (of Anaheim) and especially in Maxwell park has seen a dramatic increase.”

Later in the meeting, Harvey noted citywide crime is down 5 percent this year, compared to 2017.

“I don’t want the perception to be the parks are riddled with crime. They’re not. …. some of them have single digit crimes in a 12-month period,” Harvey said. “There’s no question, without a doubt, Maxwell Park, although vastly improved, was a true crisis that we were facing.”

Mayor Tom Tait asked, “I’m trying to get a feel for if crimes have actually gone up (in the parks) or if it’s more that police … are vigilant in cracking down.”

“I would say that increase is probably a combination of both. We’re getting reports of activity that’s drawing our resources in there,” Harvey replied. “We will actually create a mission sheet for our officers to spend time in there and that will increase arrests for narcotics.”

“I actually spent a couple of hours at Maxwell Park recently … and many of (the homeless people) said they came from the (former homeless camp on the Santa Ana) riverbed,” Harvey said.

He also said the police have arrested 60 people since July 1 “in and around” Maxwell Park, with the majority of “offenses far beyond the status offenses like storage or camping. In fact, most are narcotics related, or theft or possession of (stolen property).”

Vladimir Shagov, who was resting at the park Aug. 3, said Anaheim police officers show up at least once a day and usually talk to people who have more than just a few items with them at the park.

“The cops need to slow down a little bit — they got too confident,” the 46-year-old Shagov said. “Sometimes people just get tickets, sometimes they get arrested … I don’t see any signs that say how much (property) you can have (at the park).”

Shagov said he was a truck driver until about five years ago when a back injury put him out of work. He said he’s doing residential moving jobs to save up money for a car “and get the hell out of here.”

Another homeless man, 62-year-old Bill McKee, said several of his friends have been ticketed for having their stuff at the park.

McKee said he’s nearly blind in his left eye because of cataracts and his other eye “keeps getting worse everyday.” After losing his construction job because of his medical condition over three years ago, he had nowhere else to go, he said. He’s in the process of filing for disability, McKee said.

Shagov and McKee said people leave the park before it closes at 10:30 p.m. and find somewhere to sleep, but the two didn’t say where they go.

McKee said often times people try to stay on the sidewalk in front of the park, which works if there’s not a group of people.

“The more is not always merrier,” McKee said

From July 16, 2017 to July 15, 2018, there were 52 city code violations in Maxwell Park according to the report. People remaining in the park past closing time was the highest of the violations at 20, followed by property storage at 13 and camping at eight violations. The report doesn’t specify if that number includes arrests.

The deputy chief noted the enforcement efforts push people to other parts of the city.

“We’re in some manner squeezing the balloon and pushing the problem elsewhere. But we have made a very firm decision that these very precious park spaces do need to be used for their intended use for families to enjoy and recreate and to be free from open drug use,” Harvey said.

Maxwell Park had the highest number homeless-related crimes reported at 40 out of 47.

The analysis which spans July 16, 2017 to July 15, 2018, found illegal drug use to be the most common crime at Maxwell. Harvey’s report noted that 11 of the 12 reported drug offenses were homeless related.

The increase of homeless people resting in the parks was attributed to the County’s clearing of the Santa Ana Riverbed homeless camp.

The county is scrambling to find more shelter space after it cleared the roughly 800 homeless people out of the Santa Ana riverbed beginning Jan. 22. The clear out led to a federal lawsuit a week later against the county, Anaheim, Orange and Costa Mesa.

Federal Judge David O. Carter halted the evictions Feb. 6 when he ordered the county, Orange, Costa Mesa and Anaheim to stop enforcing anti-camping and loitering ordinances on the riverbed.

Carter lifted the order Feb. 20, after attorneys from both parties came to an agreement in court which provided nearly 400 hotel and motel rooms for homeless people for 30 days. The riverbed evictions ended Feb. 26.

“… the riverbed got cleared and despite all assurances that there was a plan … it came back to roost. This is almost of our making, we pushed (for) the riverbed to be cleared … and it ended up in our parks,” Councilman Jose Moreno said during the City Council meeting.

Shagov said he moved to the Maxwell Park area after he was cleared from the riverbed and his 30-day motel stay ended. “It’s been rough … they (the police) just start doing whatever the fuck they want, you know,” he said.

After Harvey’s presentation, Councilman Stephen Faessel said the report shows “a lot of criminal activity in our parks. I think we all want to get our parks back to where our kids and our grandkids can recreate in them.”

He also asked Harvey how many calls the police department gets about homeless people citywide.

“It’s trending up, it’s about 16,000 calls for service a year that are homeless related,” Harvey responded.

“I think this shows that some forward movement is being made, but we hear a lot from our neighbors and our friends … about Maxwell Park,” Faessel said.

The Aug. 3 interviews at Maxwell Park led to an encounter with an Anaheim police officer and the Voice of OC reporter over taking his picture after the officer detained a homeless man the reporter interviewed.

During council comments at the end of the meeting, Moreno said he was concerned about the incident.

“There was a story in Voice of OC and I know Mike Lozeau is an awesome officer, but there was a disturbing piece in the Voice of OC — I want to make sure our city cooperates as much as possible with what looked like a conflict with a reporter,” Moreno said.

He continued, “I just want to make sure we’re cooperating, but also figure out what’s going on … I want to make sure our officers are working to protect our First Amendment rights, but … that we also give them the benefit of the doubt and make sure the investigation occurs in a way that’s fair to everyone involved.”