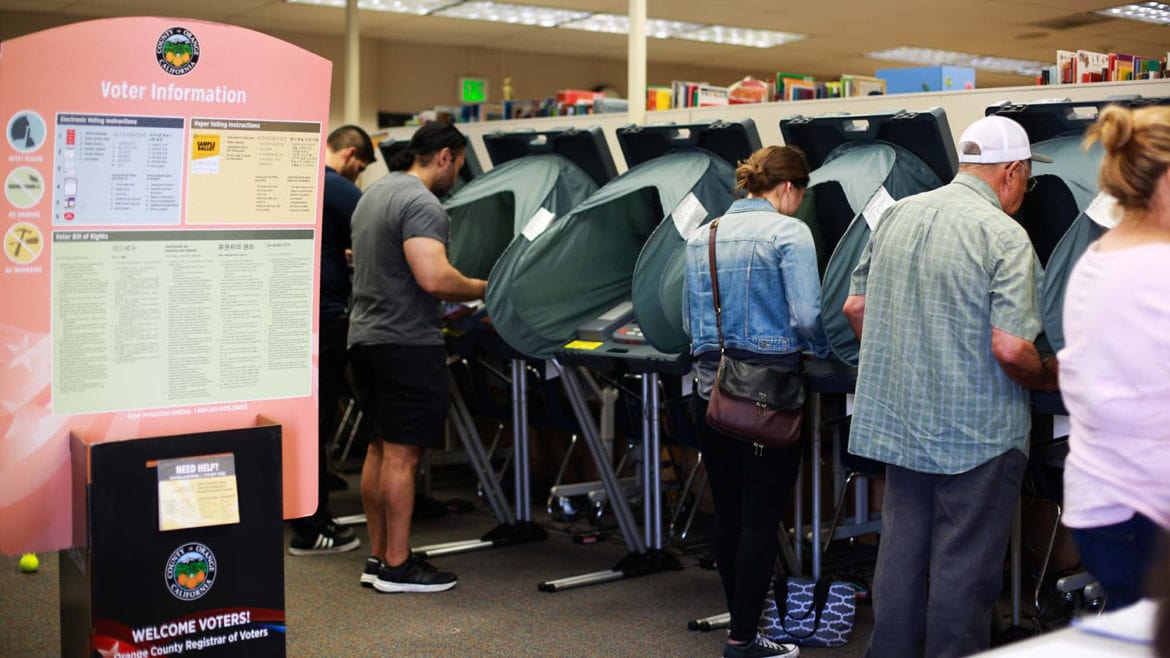 Garden Grove, Placentia, Laguna Beach and Seal Beach will ask their voters to raise the sales tax by one percent, while Santa Ana is pursuing a 1.5 percent increase, which would make it the highest sales tax in Orange County at 9.25 percent.

Santa Ana is asking voters to approve a new business license tax on commercial pot shops. Tustin is looking to raise the transient occupancy tax – commonly known as a hotel bed tax – from 10 to 13 percent, while San Clemente is proposing raising its hotel bed tax from 10 to 12.5 percent.

Cities statewide are facing grim budget forecasts, driven in part by the ever-growing cost of public employee pensions. Those costs are only expected to grow in the coming decade, as recent policy changes by CalPERS, the state pension agency, require employers to pay off their pension debt more quickly and at higher rates.

“We just had a 3.6 percent cost increase from CalPERS – unanticipated, and out of our control. It just happened to us,” said Jones. “I don’t know how that’s going to be sustainable, and I don’t know how cities across the state are going to be able to survive that.”

Except for Laguna Beach, the sales tax proposals are a general tax, meaning once approved by voters, the revenue is available for all governmental purposes. The Laguna Beach measure is a special tax that would go toward fire services and putting utilities underground.

A January study by the League of California Cities found that over the next five years, cities’ dollar costs for pensions are expected to increase by more than 50 percent, and more than double the percentage of their general fund devoted to pension costs.

Since the Great Recession in 2008, many cities have made cuts and haven’t restored services to pre-recession levels. Officials say they don’t want to cut services further and argue they need to spend more on police, citing growing homelessness and state laws that law enforcement groups say are driving up crime and overburdening local police.

But a Public Policy Institute of California study on one of those laws, Proposition 47, found no evidence Prop. 47 has impacted violent crime rates, although it found “some evidence” that property crimes have increased as a result.

The bulk of employee pension costs – about two thirds — are driven by benefits for police and firefighters, which generally are more generous to compensate for the risks public safety employees endure as part of their jobs.

At a Garden Grove City Council meeting on July 10, Bob Leland, a consultant hired by the city to analyze its budget, told the council that most California cities are facing the same problem.

“But time is not your friend here. You really cannot wait too long on this,” Leland said. “Current budget challenges are either going to require significant cuts to key services or additional, locally-controlled revenues, because at least they are not subject to state takeaways.”

Cities also blame the state for eliminating redevelopment agencies, once a tool for diverting tax revenue to city-run agencies to fund projects in blighted areas.

While cities only receive one cent on every dollar of taxable sales collected statewide, by passing their own tax, they have a revenue stream that’s entirely local.

Even if voters approve the sales tax increases, it’s murky whether that new revenue will be enough to sustain current service levels and keep up with the pace of rising pension costs.

In Santa Ana, officials expect the budget shortfall to grow from $10 million this fiscal year to nearly $40 million by 2021 – a figure which could change depending on whether employees are given further raises, or if the economy goes south.

If approved by voters, Santa Ana’s 1.5 percent tax increase would raise an estimated $63 million in new revenue each year for ten years. Starting in 2029, the rate would fall from 9.25 percent to 8.75 percent, generating an estimated $40 million per year, according to a city staff report.

But the city’s total spending on pensions is also projected to grow by 80 percent over the next five years, from $45 million this fiscal year to $81 million.

In July 2017, Santa Ana officials approved raises for police officers, an additional $3.8 million in annual costs. As part of the deal, police officers agreed to raise their pension contributions from 9 percent to 12 percent of their salary (12 percent is the maximum) and cap city payments for medical costs at current levels, which will offset the labor costs by $1.1 million.

In December, the city also approved $1.5 million in raises for members of its general city employee union.

While other cities, like Garden Grove, have given employees one-time cash payments in lieu of salary increases, costs that don’t count toward pension benefits – any increase to an employee’s base salary will affect how much cities, and taxpayers, are on the hook for their public pension.

An expansion in public benefits for public employees in 1999, followed by underperforming investment funds after economic crashes in the early 2000s and 2008, have led to the steady rise in the cost of public pensions, quickly outpacing the ability of the state pension system to keep its program funded.

Salaries for public employees have also continued to go up, while retirees are living longer.

CalPERS has made a number of major changes in recent years to try to fund its program.

Lowering that estimated rate of return shifts more costs on cities and the state government to make up for revenue the pension agency isn’t getting from its investments.

In Garden Grove, city officials are trying to pare down a projected $8 million deficit for the 2018-19 fiscal year, by instituting an early retirement program, 5 percent budget cut to every department but public safety, and other adjustments. Even after the cuts, the city is left with a $3.6 million shortfall, according to a budget presentation.

Annual deficits will continue to rise, and hit $12.2 million in the 2022-23 fiscal year, according to the presentation.

Since 2009, in addition to cuts, Garden Grove officials have largely dealt with shortfalls with one-time fixes and by drawing nearly $14.5 million from internal funds, funds that are now almost depleted, according to staff. Nearly $15 million in maintenance costs for equipment, streets, storm drains, buildings and parks, have also been deferred, said Deputy City Manager Maria Stipe.

Jones said the city has been trying to operate “lean and mean” since the 2008 recession.

“We have spent the last years prudently trying to make cuts, taking furloughs, so we could avoid mass layoffs like surrounding cities,” said Jones.

Still, the city has increased spending in some areas. In the 2016-17 fiscal year, citing concerns about neighborhood crime, the city council added five new police officers and upgraded three firefighter positions to firefighter/paramedic positions. The city also cancelled a contract with the county for shelter and animal control services and started its own department, arguing that taking the service in-house would be cheaper in the long run.

Jones said the city has tried to develop an ongoing source of new revenue by investing in new hotel developments along Harbor Boulevard. Those efforts have been “incredibly effective,” Jones said, but blamed factors “somewhat outside” the city’s control, like the state’s decision to close redevelopment agencies and pension pressures, on current budget woes.

In Placentia, city officials say they cut 15 percent of the annual operating budget to make ends meet this fiscal year, about $2.7 million in reductions. The annual deficit is expected to hit $11.3 million in 2028-29, according to a staff report.

This year, the city is budgeted for 18 fewer employees than it did had before the recession in the 2007-2008 fiscal year.

According to Assistant to the City Administrator Jeanette Ortega, all Placentia employees contribute the maximum contribution to their pension, or 12 percent of their salary.

Placentia councilman Craig Green also pointed to declining sales tax revenue as a major factor, noting that the growth of online sales is contributing to declines in overall revenue.

“The only way to make up for that is to do a transaction and use tax that Sacramento can’t touch,” said Green. “It’s not healthy, and I’ve always been anti-tax, but the financial sustainability of the city is my primary concern.”

Green noted that in June, the council updated the city reserve policy, which requires portions of the revenue generated by a new general tax to go toward reserve funds.

Seal Beach has operated with a small surplus for the past five years, raising employee wages to keep up with the cost of living and granting some employees merit increases.

This fiscal year, the city faced a $4 million deficit, according to a staff report. After reductions, that deficit was reduced to $80,000, although city officials didn’t respond to a request for comment about those reductions and what the deficit increase is driven by.

While cutting in some areas, the city also added two new, full-time police officers this fiscal year, paying for the expense out of a swimming pool fund.

In the 2016-17 fiscal year, Seal Beach paid $4.8 million toward pension expenses, according to the city’s annual financial statement for that year.

In both Placentia and Seal Beach, the sales tax increase is expected to raise about $5 million in new revenue each year.

In Laguna Beach, the argument for the sales tax increase, which would generate $5.6 million annually, is primarily to fund a $135 million project to put power lines below ground.

But the city has generally enjoyed growth in staffing, adding 14 new positions in recent years, according to a budget presentation.

Laguna Beach voters in 2016 approved Measure LL, which increased the city’s hotel bed tax from 10 to 12 percent. Officials estimate $2.2 million in new revenue from the measure this fiscal year, and have allocated that money toward new positions and expanding city services like summer lifeguards.

Correction: A previous version of this article incorrectly stated that La Habra voters approved a sales tax increase in 2016.