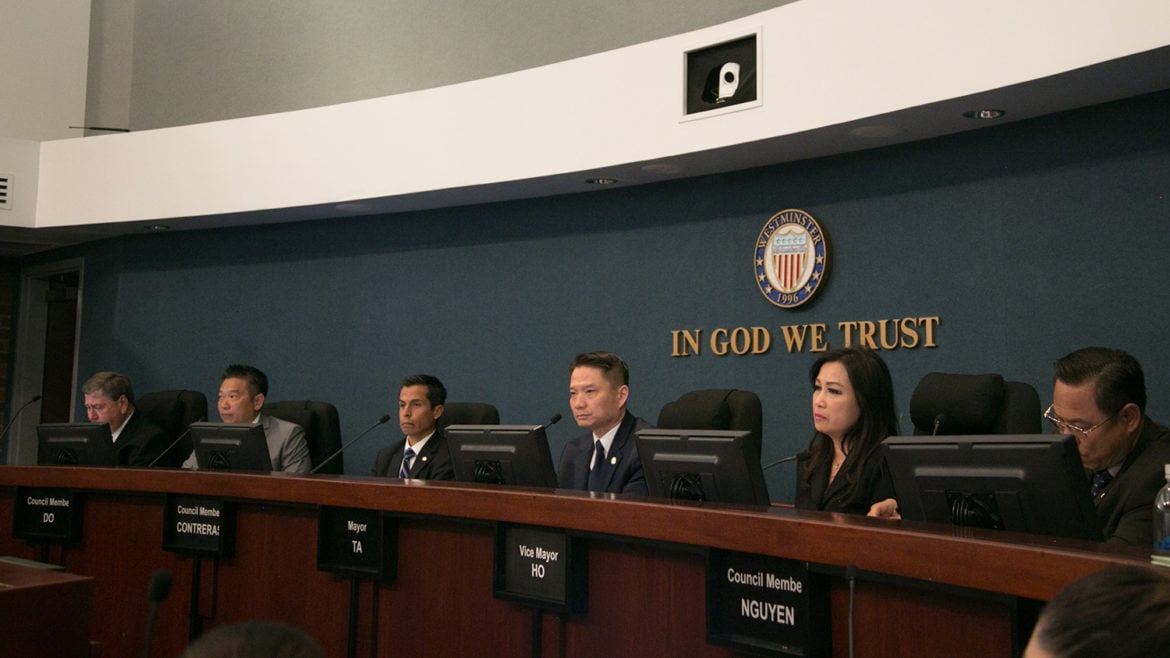 Westminster City Council members for the second time put off adopting a code of ethical conduct for city officials, continuing a months-long battle between those on the dais who see a City Hall buried in corruption allegations and those who argue they’re already following the law.

First time City Councilman Tai Do, who’s called for ethical reform at City Hall for the last few months, called council members’ Wednesday, April 24 decision to table the ethics code for another month “a tactic to bury this.”

The code will come back at the Council’s May 22 meeting for reconsideration. Until then, council members can request changes to the code’s 12-page draft, which was written by Assistant City Attorney Christian Bettenhausen and Community Services and Recreation Commissioner David Johnson.

The Wednesday debate between council members over whether the code should be changed or delayed led to arguments, frequent interruptions, and insults.

Council members Kimberly Ho and Charlie Nguyen opposed the ethics code before them because Johnson, who was just a resident when he was appointed by the council in February to help the City Attorney’s Office write the code, later became a city commissioner. But both Ho and Nguyen have for months been opposed to Do’s efforts to establish the code entirely.

“I asked (Johnson) to work on this thinking he had no hands in this at all,” Ho said at the meeting. “This is a total conflict of interest.”

City Attorney Dick Jones said that while Johnson doesn’t face a legal conflict of interest, because it isn’t a compensated position, “Obviously it is a perception issue to the extent that while he drafted the proposed ethics code when he was not a commissioner, clearly he would be subject to it now.”

“My work was done a few days prior to being appointed to a commission,” Johnson said in an email after the meeting. “The argument that I made this after appointment to Commissioner is false.”

“You are writing your own rules,” Nguyen said to Johnson during the meeting. “It’s a conflict of interest.”

“You need to stop embarrassing yourself, sir,” Do said to Nguyen in response.

“Let’s not grandstand ourselves, alright?” Ho said to Do at one point, as Do’s criticisms of council members were garnering frequent applause. “Waste of time.”

The only other council member supporting the ethics code was Councilman Sergio Contreras, who opposed tabling the code for a month of revisions and said city money was used to bring before them “a perfectly good” document.

At one point during public comment, Johnson publicly accused Ho and Nguyen of numerous ethical violations.

Johnson specifically pointed to Nguyen’s appointment of Ho’s son Weston Seid to the planning commission, and accused Ho of consolidating family power over the city because he said she’d be able to approve recommendations out of her son’s commission.

“My only response is that some of the accusations (Johnson) made near the end of his comments clearly demonstrated a strong bias in favor of Mr. Do,” said Ho in a later email. “These comments only serve to confirm my concerns about his involvement.  An ethics policy is a good idea, but it needs to be unbiased.”

Councilman Do was the first to propose the ethics code in February, but faced intense opposition from Mayor Tri Ta, as well as Ho and Nguyen, who maintained that Do is playing politics and misrepresenting issues.

Do has based his concerns on a 2016 legal claim filed by former police chief Kevin Baker, who in his complaint described a city where council members at the time pushed for police enforcement against certain businesses to punish political enemies and used city resources for their benefit.

The city has argued that Baker’s allegations were a smear effort, but he received a $500,000 settlement with the city. Baker also agreed not to discuss the allegations publicly, though Voice of OC won a lawsuit to make the claim public in 2017.

The ethics code was taken out of Do’s hands during a Feb. 27 council meeting when, at Ho’s request, the Council appointed Bettenhausen and Johnson to develop the code and bring it back to the Council for consideration.

Ho also disliked the code before her last week because it was “way too long” and said the Council needs “a more general statement” as opposed to the detailed guidelines separated in the code by sections.

Johnson in his email said Westminster’s proposed ethics code is actually shorter than similar ones from other cities like Brea, which has a 15-page document. The City of Mountain View in Santa Clara County has a 53-page document.

And taking away pages like the cover page and table of contents, according to Johnson, leaves Westminster’s document with just eight pages of content.

“This is the most ridiculous thing I have ever heard from an elected official,” Do said in response to Ho’s concerns over the document’s length and specificity, prompting long applause from members of the audience.

“What a shame,” he said over the clapping.