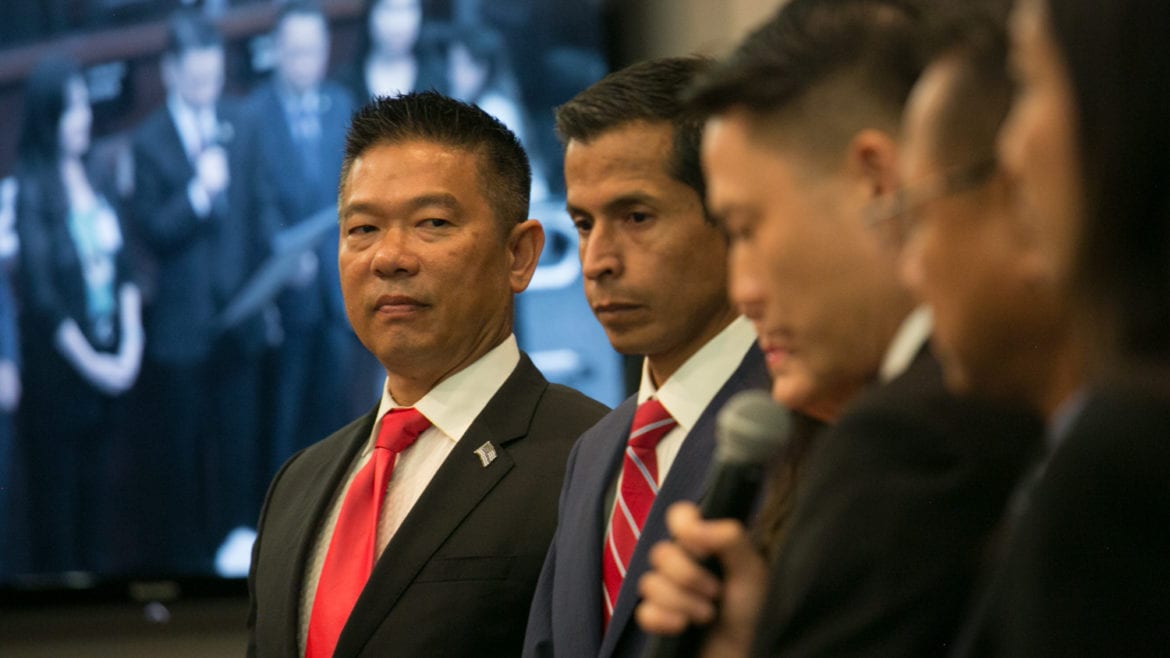 Westminster City Council members give out a city recognition at the start of their Sept. 11 meeting.

Westminster has entered a “perfect storm,” according to City Hall observers and officials.

A special recall election this year could shift the City Council’s balance of power.

Sworn depositions have begun for a series of corruption and retaliation lawsuits against the police department by four of its employees.

Residents will soon have to decide between continuing a higher local sales tax or absorbing $13 million in yearly losses to city revenue with cuts to public services.

And now the City Manager, Eddie Manfro, has announced his upcoming retirement next month, with no clear replacement to oversee the city’s top managerial post because his second-in-command, Chet Simmons, is also leaving for a city manager job in Los Alamitos.

“It’s the tipping point, with all that’s been happening,” said City Councilman Sergio Contreras in a Tuesday, Jan. 21 phone interview. “The community is obviously divided. People have a lot of questions about what’s happening on the council. The way we do business has changed. Putting policies on the agenda is now more difficult.”

The two top-ranking executive staffers overseeing the city’s day-to-day administration are headed out the door.

After seven years in the city’s top managerial post, City Manager Eddie Manfro has announced he’ll leave by the end of next month for a private sector job, leaving no clear permanent replacement for his spot and concerns that recent news headlines surrounding the city will steer away any qualified outsiders from taking the job. 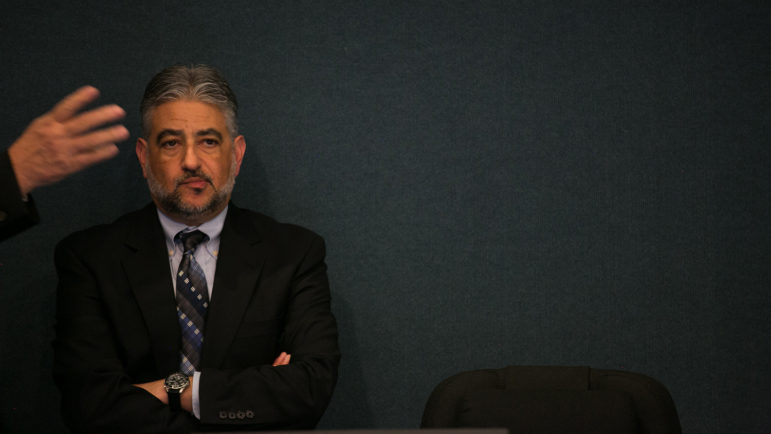 And now his assistant city manager, Chet Simmons, is also leaving for a city manager job at Los Alamitos, where the city council there voted unanimously to appoint him at their January 21 meeting. He’s set to start in February.

Manfro was not readily available for comment as of Friday.

“When I heard Eddie was leaving, I thought, ‘well, Chet is there.’ Now I’m concerned that there’s going to be a rush to get somebody in there,” said resident and City Hall observer Jessica Losteneau. “And this is the absolute worst time to rush.”

The city has “no city manager and no assistant, and three council members may be leaving,” she said. “Right now, we need the perfect fit … I have no idea how they’re going to make it work.”

“We’re going to be challenged to fill that position, it’s not going to be easy given all the optics,” Contreras said, referring to media coverage of years of corruption claims thrown at the city by current and former employees.

Manfro was named city manager in 2012 by the council following the retirement of his late predecessor, Mitch Waller. He’s set to officially leave by late February.

Throughout his tenure at City Hall, Manfro oversaw a number of controversies that included a federal discrimination lawsuit against the police department by three Latino police officers — which left the city on the hook for an over $3 million federal judgement in 2014 — followed by claims of corruption and retaliation at City Hall by a former police chief, Kevin Baker, in 2016.

Sworn depositions have begun for new lawsuits facing the city’s police department, this time centered on the leadership of former police chief Ralph Ornelas, who was brought onto the department in 2017 during the fallout of the federal lawsuit and Baker’s corruption claims. 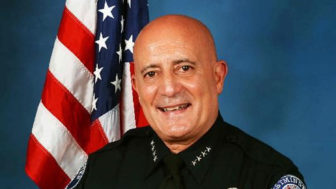 Four lawsuits — from three rank-and-file officers and one top-ranking administrator — describe a department in “turmoil” that passes qualified officers over for promotions in retaliation for speaking out against wrongdoing under Ornelas, who allegedly condoned misconduct in the workplace and handled internal disputes with a “mafia”-like persona.

The city denies all four claims — by officers Jose Flores, Matt Edinger, Ryan Fletcher and Cmdr. Cameron Knauerhaze — and the officers have since filed lawsuits over the summer last year.

Ornelas has not responded to Voice of OC’s requests for comment.

All four employees are represented by attorney Dennis Wagner, who’s represented a long list of former employees leveling similar lawsuits against the city over the last several years.

Wagner in an email said depositions — out-of-court, sworn testimony that’s used to gather information in a case’s discovery process — have begun for the current lawsuits. 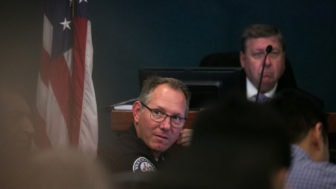 The cases could prove costly to a city that’s racked up attorney fees for numerous legal issues, but are some of the first in years that the city has opted to go to court with rather than settle the claims for hundreds of thousands of dollars in exchange for employees signing non-disclosure agreements.

The city charged the police department $971,000 this fiscal year for liability claims paid out of its budget. That amount accounts for nearly half of the city’s $2 million legal liability spending budget for the 2019-2020 fiscal year and pays the largest portion out of all the city departments who contribute their share.

Over the last several years, at least eight employees have brought claims against the city alleging discrimination, corruption and wrongdoing in their work environment, most of them coming out of the police department.

A sales tax increase that city officials say is crucial to keeping the city’s budget above water is set to expire in 2022.

The one-cent increase, which voters passed in 2016 and took effect in 2017, has brought in tens of millions of extra dollars to the cash-strapped budget, according to staff.

But once the sales tax expires, “the fund balance evaporates almost immediately,” Johnson said at a May 22 Council meeting last year.

That means that unless city officials bring an extension of the sales tax increase back before voters in a ballot measure before 2022, the city could see cuts of up to $13 million in annual needed revenue that Manfro in his retirement letter called an “essential lifeline.”

When the City Council approved this year’s budget last May, staff also projected a deficit of $151,000 during the next 2020-2021 fiscal year. It would mark the first time that general fund expenses outrun revenues since the 2016-17 fiscal year.

“We will begin preparing the update for that budget year sometime in April. At that time, we will address any changes that have occurred since the original adoption,” she said on Friday.

The issues of lawsuits, budget strains and a looming leadership vacuum all come as the city could experience a major shift in the politically-divided City Council’s balance of power.

A recall movement launched by a group of frustrated residents with a billionaire’s backing will result in a decision by voters whether council members Kimberly Ho, Charlie Nguyen, and Mayor Tri Ta should stay in office or be replaced. 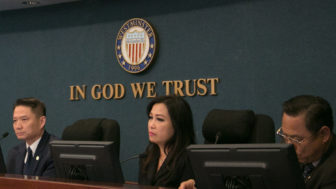 The recall group, Westminster United, says Ho, Nguyen and Ta are guilty of numerous ethical violations at City Hall. Those are charges the council members have repeatedly denied, arguing instead that Westminster United is comprised of disgruntled political opponents who want to take control of city affairs.

Ho, Nguyen and Ta have frequently clashed with council members Do and Contreras — who comprise the council minority — over the last year on issues like ethics and transparency at City Hall, during meetings that see large crowds and often times push discussions toward midnight.

A special election is set for April 7, after Westminster United successfully canvassed for signatures on their recall petitions from 20 percent of the city’s registered voter population.

A letter opposing the recall — authored by one of the majority council members’ recall attorneys, Lan Quoc Nguyen — ties the recall’s success to a key backer of Westminster United’s movement: billionaire Kieu Hoang, who hired paid signature gatherers during the movement’s canvassing stage and enlisted the services of political consultant Dave Gilliard.

The council in-fighting has been frequently blamed for a year of political divide at City Hall and in Little Saigon’s Vietnamese American community. 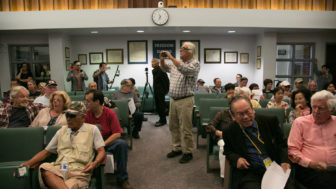 The public at a Westminster City Council meeting on September 11th.

Since the recall efforts gained momentum last summer, Ta came under scrutiny in September over a city resolution he introduced and passed claiming interference at City Hall on behalf of the Vietnamese government — a move his critics decried as trying to quash the recall by tying its proponents to foreign agents for Hanoi.

Ta defended himself in a Jan. 17 statement, saying his terms on the council have seen “improved infrastructure, decreased crime rate, a sustained level of public safety,” and other successes.

Meanwhile, proponents for his recall have caused “a lot of disturbance to the City’s otherwise peaceful nature,” he said.

The recall “will be a choice between progress, independence, and decency which I represent,” Ta said, “or that of division, fear, and retreat.”