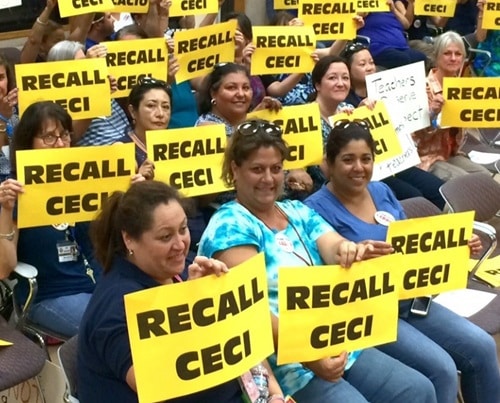 Recently, the OC Register and other news blogs have posted articles that are very misleading. The articles tend to reduce support for and are slanted against our blue-collar public safety professionals, why? No one likes career politicians much less those that behave in unethical, illicit or illegal fashion believing they are above the law or better than those they are to be accountable to. Do as I say, not as I do is Councilwoman Cecilia Iglesias. Ms. Iglesias is not a good representative for the people of Santa Ana.

Truth be told, Councilwoman Cecilia Iglesias has been ruthless and unethical going back to her days on the Santa Ana Unified School Board. She has attacked our teachers and school employees and their respective unions. She has bullied them, and no one has ever stood up to her.

Now, as a Councilwoman, she has become more unethical and her behavior risen to an unacceptable level, verging on criminal. Elected officials are held to a higher standard. They are not above the law and surely must be held accountable.

Local citizens, thousands of them, initiated a process to recall Ms. Iglesias because Santa Ana is suffering from a housing crisis and she voted no for affordable housing; she does not support Santa Ana’s immigrant community; she opposed revenue initiatives supporting after-school programs, homelessness and public safety; and, she posted a video advocating the defunding of the Santa Ana Police Department. Good reasons to question her ability to represent the citizens of Santa Ana.

The Santa Ana Police Officers Association does advocate and support after-school programs, addressing homelessness and providing the best public safety to our community.

Facts: the city of Santa Ana finished the fiscal year ’18-’19 over $6 million in the positive. They underestimated revenues by over $16 million. (page 128, city report) Claiming that needed programs can’t be funded is wrong. That’s newsworthy.

The Police Officers Association supports this recall because since Ms. Iglesias has been in office her slanderous comments about the Association, her lies, have been repeated and continuous, interfering with the Association’s right to represent its members. (see attached complaint). In June of 2019, a complaint was filed with the city citing her illicit behavior and nothing was done. In 2019, she violated the City Charter by interfering in a civil service personnel hiring creating huge financial exposure for the City and no corrective action taken and no investigation. In 2019, she filed a frivolous lawsuit against the City of Santa Ana and County of Orange costing taxpayers thousands and no investigation into the matter. She voted “No” on the Centennial Education Center which is “No” to a much-needed branch library and “No” to a community center and park improvements in Santa Ana.

Finally, someone had the courage and will to stand up to an unfit and unethical politician. Over 16,000 residents signed a recall petition for various reasons. This is a democracy and the will of the residents should not be silenced.  The city of Santa Ana deserves BETTER.

Voice of OC is interested in hearing different perspectives and voices. If you want to weigh in on this issue or others please email [email protected].