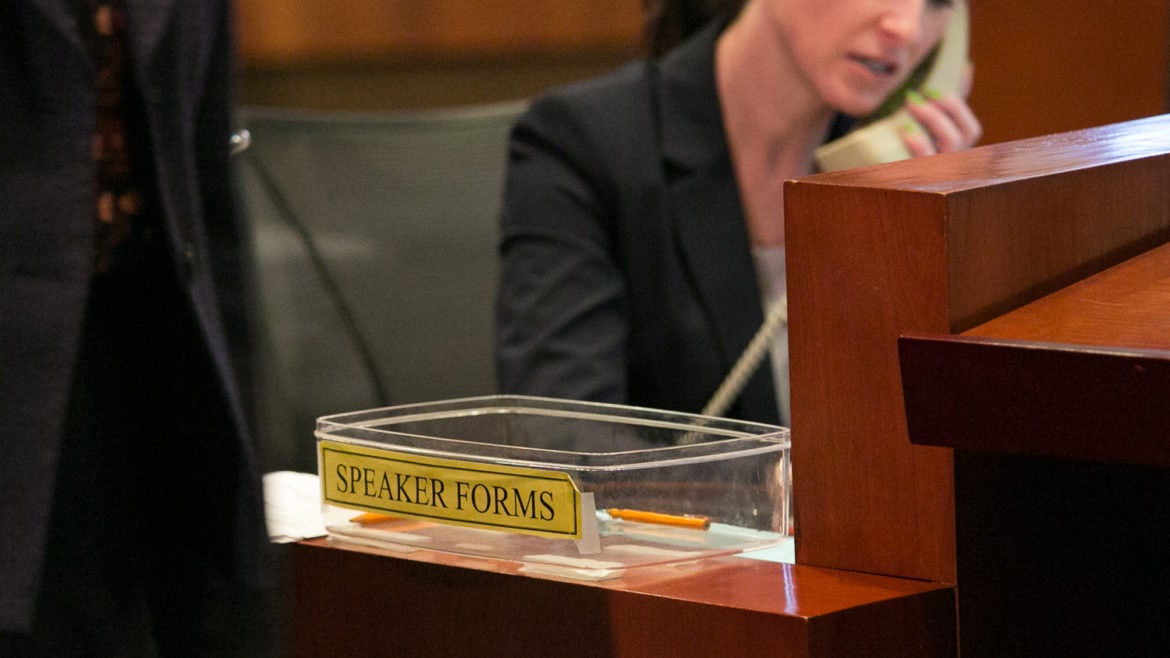 The Orange County Board of Supervisors May 7, 2019, meeting.

Throughout the coronavirus shutdown, many of Orange County’s public agencies have struggled to provide access for constituent voices to be heard.

Since many government buildings closed their doors to the public in March, opportunities for county residents to comment on policy decisions have been limited by multiple agencies, with some favoring only in-person commenters or cutting out the observations altogether.

Orange County residents have taken issue with the decision across several meetings, accusing city councils and other elected officials of using the pandemic as an excuse to silence dissenting opinions. Additionally, legal experts have begun asking if municipal panels are circumventing open government and transparency laws to the detriment of constituents.

The county Board of Supervisors recently changed its public comment system at the end of June to allow remote input for those struggling with a disability and ensure they were read aloud at meetings.

The board was one of the few governing bodies not to close its doors even temporarily, and has routinely been filled with commenters against the statewide shutdown and the county’s mask order that was rolled back after the resignation of county health officer Dr. Nicole Quick.

But the information to make those comments is not made apparent on the county’s website, with no indication that written input can be submitted and read aloud on the page county spokeswoman Molly Nichelson referred reporters to when asked what were commenters’ options.

The only indication of another route other than speaking at the meeting is a note at the bottom of the page that asks those with disabilities to reach out to the county to work on the problem.

That page also says that members of the public may not address their comments to staff or a specific member of the board, despite a ruling against the county last year after the American Civil Liberties Union sued over that rule and it was struck down.

The first remote commenter at the board’s June 23 meeting and several others criticized the county’s decision to pull back on the mask and social distancing regulations, with some sharing they had been afraid to come to meetings because of the health risk.

“I submit these written remarks because it is unsafe for me to physically attend board meetings,” said the first comment read by Leon Page, county legal counsel. “The death toll is mounting almost daily, Hospitalizations are the highest ever. The number of positive tests are going up, not down, while the numbers of daily tests are going down, not up.”

“Things are getting worse, not better.”

At the city level, access to public comment fluctuates wildly throughout the county, with some city councils offering in-person input and a phone in connection while others choose to only summarize a list of emails.

Huntington Beach has offered a large variety of options, allowing commenters to call in from home via a Zoom teleconference system and a choice to speak in person. Commenters must wait outside, and in between speakers the microphone is repeatedly sanitized.

The week that Huntington Beach discussed potentially reopening the majority of the city, it received over two and a half hours of live public comment from advocates on both sides of the argument.

In Santa Ana, after several weeks of changing policies, the city council decided on a phone-call only policy, trying to balance the public’s right to speak with health concerns.

But in south county cities such as Irvine and Mission Viejo, residents have not been allowed to set foot in city halls for close to five months.

Residents cannot call in during council meetings, and their only options to give input are to email the city clerks or, in the case of Irvine, to also use the city’s e-comment feature, which limits observations to 500 characters.

Mission Viejo does read the comments that are submitted, but does not offer an alternative to the email system.

Residents from both towns frequently protested the cities’ continued use of the system, calling it an attempt to stamp out their freedom of speech. Some have figured out ways to protest using the e-comment system in Irvine, commenting under multiple council items to give themselves more characters to have their say.

The first mention of changing the system came last week, with Councilwoman Melissa Fox sharing concerns about the lack of live access.

“This isn’t actually a hearing, there’s no testimony from the public,” Fox said.

Legal experts have also started questioning whether government agencies can deny residents the chance to interact in real-time.

Karl Olson, a First Amendment and media lawyer from San Francisco, said that cities failing to offer live public comment are almost certainly violating the Brown Act, one of the chief public transparency laws in California.

“These public comment things exist for a reason and one of those reasons is so they can actually see you,” Olson said. “I don’t think an email is an adequate substitute.”

Olson said that cities that are only summarizing public comment slips submitted would also be out of compliance.

“If there are written comments they should be included in a council package so that members of the public can see it. I don’t think it’s ok to say, ‘Oh we got 100 comments and 70 were for and 30 were against.’”

This past week, the county Board of Education received nearly 4,000 written comments ahead of its decision on a set of controversial guidelines for the upcoming school year, and allowed less than 30 in-person commenters to speak.

The write-in comments were not read before or after the vote, and no official tally for how many people were for or against the guidelines has been announced.

Mari Barke, a member of the board, spoke at a reopening rally on Saturday in Murrieta, calling those who sent in comments “haters,” and taking aim at Gov. Gavin Newsom’s decision to close schools in counties on the state’s coronavirus watch list, which includes Orange County.

“We’re not demanding anything, we just put out a white paper suggesting children are at low risk to return to school,” Barke said. “We’ve since gotten 3,000 letters and more from haters who hate what we’re doing because we want people to have liberty…it’s up to the parents.”

It remains unclear what direction the county will take with choices for public commenters, but options may begin to shift as cities begin to discuss reopenings of city halls in the coming months.

Correction: An earlier version of this story stated that a comment was submitted by county counsel Leon Page. The comments were read out by Page at the meeting, not written by him. We regret the error.