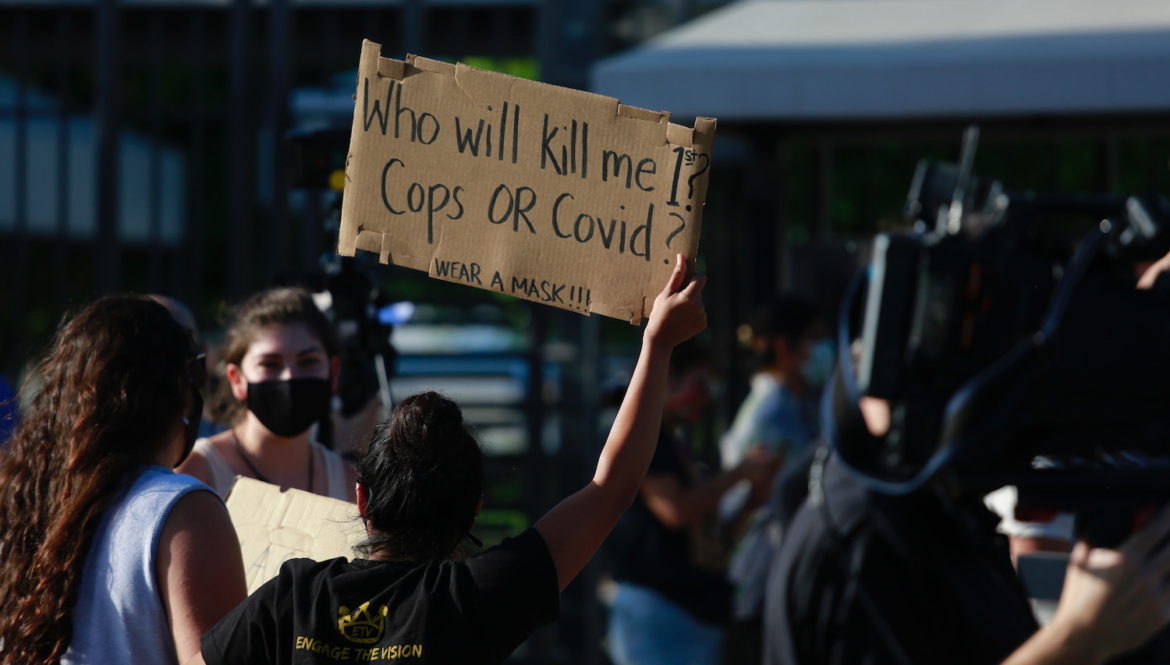 Orange County's election season this year could be shaped by local response to the coronavirus pandemic and countywide protests calling for police reform and social equity for communities of color, which saw young people take to the streets en masse.

Party leaders and political experts say the outcome of Orange County’s most consequential election year in decades will be shaped by regional forces like the coronavirus pandemic’s strain on local health systems and government response, as well as countywide social justice movements to recognize communities of color and overhaul public safety.

Monday marked the start of the nomination period for candidates to declare themselves in this year’s elections across the county, and have until Aug. 7 to do so.

“That’s the theme,” Smoller said, adding he believes that Trump’s association with local Republicans running in November could “give them a rough time” with voters dissatisfied by the president’s response to the coronavirus (COVID-19) pandemic and a wave of countywide protests calling for social equity and systemic reforms to policing and public safety.

Couple that, he said, with Democrats’ incumbency advantage in the local congressional races, resulting from the 2018 elections that saw the so-called “Blue Wave” in the county when congressional seats flipped from Red to Blue.

On the other hand, countering forces like residents opposed to state health guidelines amid the local pandemic — namely mask orders — have also made their presence known in public county supervisors’ meetings and defiant local businesses, dismissing public health mandates and echoing Trump’s calls for a ramped-up reopening of the economy.

And during meetings filled with dozens of young people calling for systemic reforms to policing, public safety and the treatment of people of color, there have also been county residents — many of whom also spoke out dismissing mask-wearing and the pandemic — who have shown up to counter them, like at one supervisors’ meeting in June.

Asked whether that segment of the county population will also be a force to reckon with in terms of voter turnout, Smoller didn’t rule it out but argued they’re “a declining force.”

“This may be their last gasp,” he added.

“I don’t believe this group of voters — and even just residents — are coming out for political reasons. They’re not all one type of person. We’ve talked to them. They’re coming out because they are frustrated with what you saw with the health orders and the closures of businesses … there was massive outcry,” Avila said over the phone Sunday. “It’s not necessarily politics driving them. It’s their livelihoods.”

Regarding their ability to turn out in force, Avila added he doesn’t believe those people “are losing steam.”

“It’s not just about going out and getting a haircut or being able to build a sandcastle at the beach, it’s about being able to support your families and keep the lights on,” Avila said.

On the other hand, Democratic Party of Orange County Chair Ada Briceño echoed Smoller, arguing seatholder Republicans’ response to the local pandemic will bring voters into the Blue corner.

“From Donald Trump to local Republicans on the Board of Supervisors like Michelle Steel and Andrew Do, we’ve seen what happens when leaders downplay the costly dangers of a pandemic. COVID-19 has revealed how fragile we are — from our health care and child care, to the programs we need to help people and businesses overcome crisis,” Briceño said. 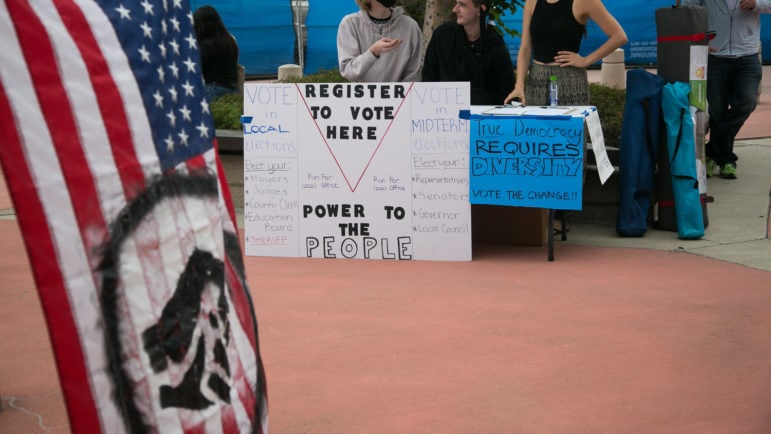 A voter registration table set up by community organizers at the June 23, 2020 Board of Supervisors meeting.

Smoller admitted that while his op-ed — in which he and fellow political science professor Mike Moodian called for a renaming of John Wayne Airport in light of the local protests and problematic statements by the late actor — went viral on social media and got support, it also got pushback.

That district in 2018 was considered by FiveThirtyEight to be highly sensitive to changes in the national political environment and national outlets like Politico say the district will likely again go to Porter — who’s become a star in the national party through fundraising and committee hearings.

Smoller said Republicans’ reluctance to support the airport’s renaming is a “missed opportunity” at a shot in the arm heading into November — a chance for Republicans to “make amends with people of color and reduce their rhetoric regarding (LGBTQ+) people and becoming a multicultural society.”

“We’re there in OC,” Smoller added.

Countered Avila: “We can do better to make amends with those communities by bringing policies forward that better people’s lives — not ones that make people feel good for a moment or play well to what the national narrative is.”

At the local level, Republicans still outnumber Democrats in the number of city council seats held throughout the county.

For the historically conservative Orange City Council, four council seats and the mayor’s are up for election, and will be subject to a new district voting system that will include the southwest region of the city that has a high concentration of Orange’s Latino residents.

Yet there’s also a Democratic stronghold in Santa Ana, where issues of police violence and calls for public safety reform have spotlighted law enforcement’s political role in the majority Democrat City Council, which — with the exception of Democratic City Councilman Vicente Sarmiento — voted this month to increase police spending despite young progressives’ protests.

On the heels of a successful, police union-funded recall of the council’s only Republican at the time, former councilwoman Ceci Iglesias, four seats will open up for election this year and prompt what some community leaders have previously called “a referendum for the soul of the city.”

And for the first time in 26 years, Miguel Pulido won’t be running for reelection as mayor, setting the stage for a mayoral battle royale with candidates like Democratic council members Sarmiento and Jose Solorio, as well as former council members Iglesias, Claudia Alvarez and Sal Tinajero and teacher Benjamin Vasquez, according to local blogs.

The DPOC has endorsed Sarmiento for mayor.

At the county level, one aspect of this year’s race for a county supervisor seat will be the coronavirus pandemic’s impacts to a district spanning immigrant and non-English speaking populations.

Contreras has been vocal lately about COVID-19 response, specifically as it pertains to information and outreach to low-income and non-English speaking communities in the county.

The Westminster councilman was one of a handful of local leaders who raised the issue of many Latino families living in population-dense areas, often in multi-family, multi-generational homes that make it impossible for someone to quarantine if they get the virus.

Do has touched on it as well.

Alongside the only Democrat on the Board of Supervisors, Doug Chaffee, Do launched the Latino Health Equity Initiative on June 30, a program that’s supposed to take on barriers facing communities of color in terms of making it through the pandemic like information, transportation, income, and immigration status.

And as debate brewed in April around requiring people to wear masks in public to help curb the spread of the virus, it was Do who proposed and passed a mask mandate for workers at grocery stores, gas stations and those dealing with food preparation.

At the state level, races to watch will include the 72nd and 73rd state Assembly districts, which saw both their incumbents — Republicans Tyler Diep and Bill Brough — knocked out in the March primary.

Diep and Brough’s losses revealed divisions within the Orange County Republican Party, which withdrew its endorsement of Diep because of his labor union-friendly votes in Sacramento. And the party urged Brough to drop out of the race amid a flurry of allegations of sexual harassment and misuse of campaign funds. Brough denied all the allegations.

Brandon Pho is a Voice of OC staff writer and corps member at Report for America, a GroundTruth initiative. Contact him at bpho[email protected] or on Twitter @photherecord.