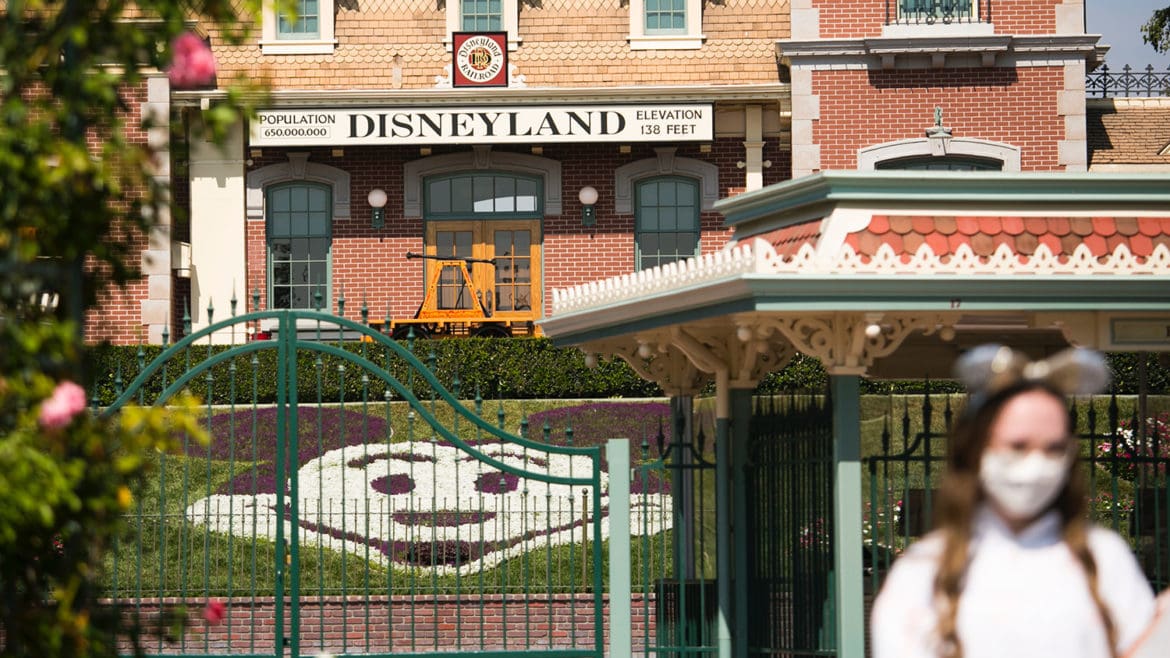 The entrance to Disneyland, which has been closed since March because of the pandemic. Oct. 6, 2020.

“My staff and I … have worked very closely with Disneyland. We have also visited Disneyland to walk through and make recommendations,” Chau told supervisors at Tuesday’s regular public meeting.

“It is now public knowledge that I have recommended to the state that the theme park reopen in Orange Tier,” Chau said, referring to the third tier of the state’s virus monitoring system.

Regarding the guidelines, Dr. Mark Ghaly, secretary of the state Health and Human Services Agency told reporters Tuesday that “theme parks continue to be a high priority for the administration and recognizing their role as part of California life but also as employment opportunities for thousands of Californians.”

Nearly 6,000 Disneyland employees could be facing layoffs next month.

“We’re working closely with a number of direct operators of theme parks … as well as the labor partners that represent the workers and ensuring that we’re moving forward together,” Ghaly said.

While Ghaly didn’t specifically address OC’s effort to keep outbreaks a secret, he said that type of information is important for residents.

“I — certainly having been a part of leadership at the county level — believe that so many of the residents depend on that degree of transparency of information to plan effectively on where they may or may not go,” Ghaly said in response to Voice of OC’s questions.

“We work to share best practices across counties and I don’t want to get into specifics about Orange and LA or other counties, but certainly I think as we get deeper and deeper into our response, the transparency of information not only at the state level, but at the county level, is very, very important,” he said.

Chau also noted there’s been an increase in cases over the past couple weeks.

“The positivity rate in Orange County is actually doing very well,” Chau said. “The case rate, that’s where we see an uptick slowly day by day — but that’s happening all over Southern California in large counties.”

The case rate Chau was referring to is one of the key metrics in the state’s new tiered listing, which puts counties into four different levels of reopening.

A Voice of OC analysis showed there’s an average of six new daily cases per 100,000 residents over a seven-day period as of Monday.

The county needs to hit a case rate of less than four in order to reopen more businesses.

When the new tiering system was rolled out, OC started in Tier One — the most restrictive one — and eventually moved into Tier Two last month, also known as the Red Tier. That means churches, restaurants, movie theaters and gyms were able to resume limited indoor operations.

Supervisor Lisa Bartlett on Tuesday said the metric is too stringent for large counties and is urging state health officials to give the county some type of credit because its hospital capacity is still good.

“We’ve had an uptick on the cases per 100,000 pretty much across the board. But at the same time these counties have not had a significant impact on their hospital system,” Bartlett said at the Tuesday supervisors meeting.

“Even though we have a little bit of our uptick in our case rate of 100,000, give us a credit or offset if we continue to have significant hospital surge capacity,” she said.

Bartlett, who this year is president of the California Association of Counties, said she and the group have been talking about their concerns with Ghaly.

Supervisor Don Wagner questioned why hospitalizations aren’t going up if cases are beginning to increase.

Chau said many of the new cases are in younger people, who typically don’t get hospitalized over the virus.

“Remember that there’s an important lag between what we see in our cases and then we see hospitalizations — 20 to 30 day difference there. So we continue to learn that and apply that to all of our moves and supports of our counties as we go forward,” Ghaly said.

Since the pandemic began in March, the virus has killed 1,289 county residents out of 54,898 confirmed cases, according to the county health care agency.

Over 905,000 tests have been conducted throughout OC, which is home to roughly 3.2 million people. Some people, like frontline medical workers, get tested numerous times.

Anaheim Mayor Harry Sidhu has been calling on Newsom to allow Disneyland to reopen since last month.

Meanwhile, Sidhu has refused to reopen his own Council chambers for in-person public comment, or to hold meetings through video conference with live public comments as the Council majority voted last week to sell Angel Stadium and the roughly 151 acres it sits on for $150 million

Assemblywoman Sharon Quirk-Silva (D-Fullerton) led the effort to send a letter to Newsom, calling for the reopening of theme parks.

The bipartisan letter was signed by numerous OC State Legislators.

“Many indoor facilities are already operating safety at reduced capacities, with face covering and physical distancing requirements, and with heightened hygiene practices. Logic would suggest that since theme parks are controlled venues operating predominantly outdoors, that they too could reopen with similar health and safety protocols,” reads the letter.

“What I would say is Disneyland has done an incredible job of addressing the health safety issues,” Kim said.

He said he toured Disneyland last week to see how it would regulate the restaurants and lines.

“We believe they can manage that very safely. In fact I wrote a letter of support on behalf of Disney,” Kim said.