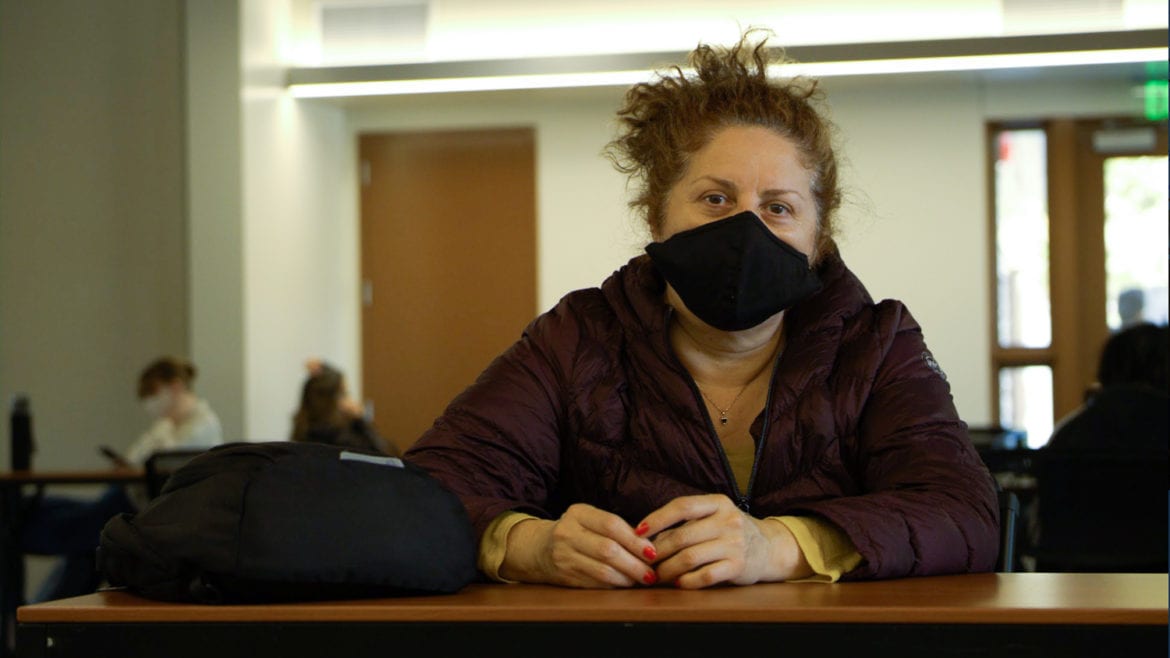 Real estate accountant Nahima Borque woke up to the smell of smoke outside her window at 8:00 a.m. just before she began getting ready to work from home again. She’s been a resident of Woodbury in East Irvine for over 10 years and wishes the city would have worked faster to send her information on what to do and where to go as she received a text from the city of Irvine an hour later to evacuate.

Tens of thousands of Irvine residents left their homes — and the Silverado Canyon wildfire that threatened them — behind on Monday, filling the city’s evacuation centers to their limit just before noon.

Later in the day, Yorba Linda residents got the same call.

By late afternoon, Lake Forest residents living in the Baker Ranch area near the 241 toll road were also scrambling after mandatory evacuation orders were issued. And late in the night, the same happened in Brea.

In all, Orange County disaster officials estimated more than 90,000 people were evacuated by Monday night.

Many of the evacuation centers in Irvine reached capacity roughly 15 to 20 minutes after officials opened them.

“It’s like nothing I’ve experienced before,” said resident and nursing student Lindsey Vargas, FaceTiming a family member against the window of the city’s Quail Hill community center that morning. “I packed some stuff before I left, but now I’m thinking, man, I should have packed my jewelry box and other valuables, but it was stressful in the moment. So I just grabbed my passport, social security — just the important, important stuff.”

She wasn’t alone in that feeling.

“They said to take your valuables,” said Pat McGrath, a 78-year-old living in an apartment along Ridge Valley Rd, pointing to her cat in its kennel inside that same evacuation center, across the room. “The only thing I could think of.” 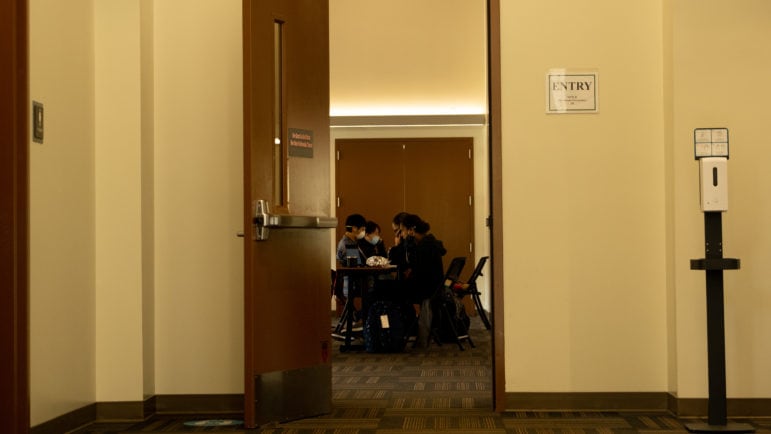 Many community centers in Irvine reached capacity within 15 minutes of them opening, according to staff. 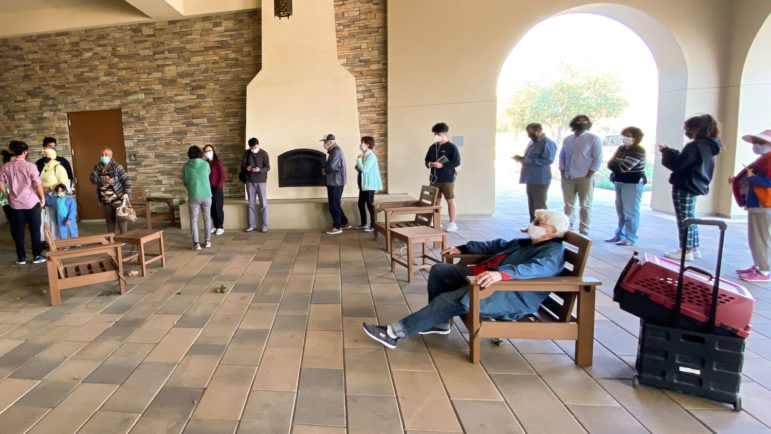 The Quail Hill evacuation center in Irvine on Oct. 26, 2020. The center at this point is already nearly full.

McGrath was unsure of what to do outside the center’s doors just moments before that, learning alongside a handful of other families that the place was too packed and couldn’t take in any more people. McGrath, however, didn’t turn away. A staffer, sympathetic to her lack of other options, granted her an exception.

Despite the chaotic morning hours, many residents told Voice of OC they more or less knew where exactly these evacuation points were, largely crediting the city’s notification system and website.

Yorba Linda residents also got orders to flee, threatened by a smaller fire known as the Blue Ridge Fire later the same day. Yet there was much less clarity about where to go. 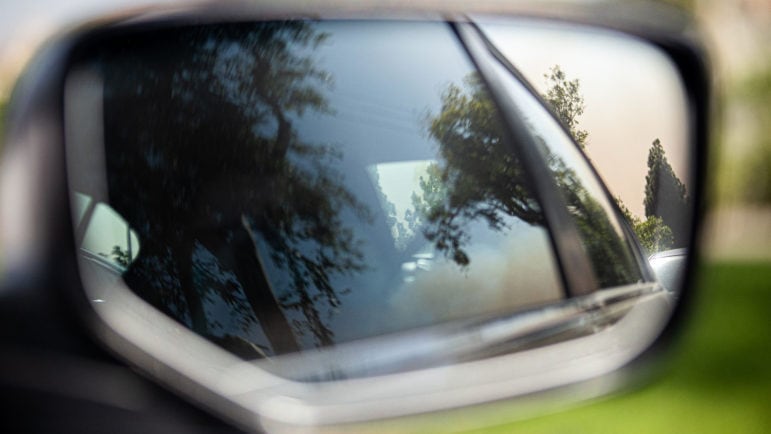 Self-portrait in a side-view mirror while in the passenger seat driving on El Camino Real in Tustin, Calif. with red skies and plumes of smoke in the backdrop on Monday at 10:53 a.m. 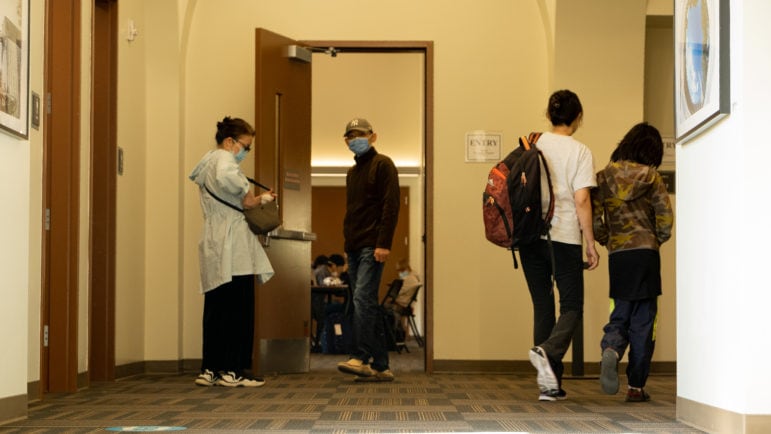 In total, an estimated 90,000 people were evacuated in Orange County by Monday.

That part came later, at Yorba Linda’s last-minute evacuation center, the Thomas Lasorda Field House, which was rarely used that night and still being set up after it was announced publicly, according to staffers who spoke on the condition of background.

Staffers told the Voice of OC that the few people who did show up were merely at a stopping point, figuring out where they were going to stay and for how long.

Orange County Fire Authority Capt. Greg Barta told Voice of OC on Monday night that around 1,170 homes were evacuated in Yorba Linda, but couldn’t give an estimate on the number of people.

Two married Irvine residents, who wished to only be identified as Frank and Virginia A., fled their condo of eight years off Irvine Blvd to the evacuation center at University Park on Monday.

Authorities need to focus not just on evacuating people, but also where they need to evacuate to, the couple said.

“We didn’t know where to go,” said Virginia A., who with her husband only got an idea of where to go from her friends who had seen some city postings. “We just got our stuff in the car and left.”

Despite some issues, Irvine officials during a midday news conference credited their own quick response and evacuation operation.

“What’s really remarkable is that we evacuated 60,000 people in such a short amount of time,” Irvine Councilwoman Melissa Fox said in a phone call with Voice of OC Monday afternoon. “We had an evacuation plan in place and according to our chief of police that’s what made it all possible.” 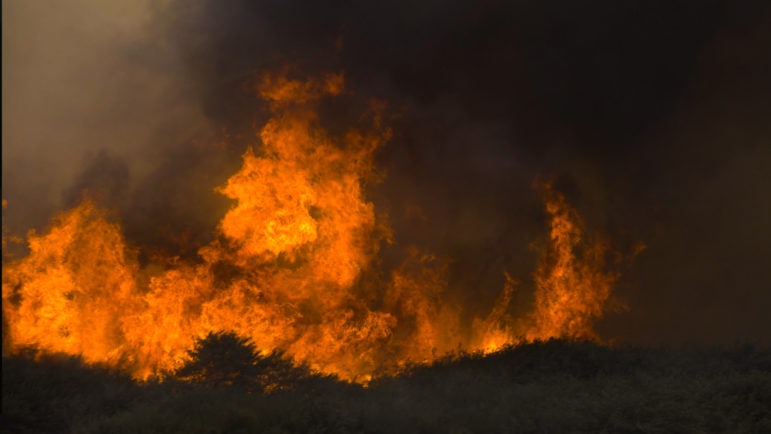 Fires continue to burn by the 133 South toll road highway entrance. As of this morning, the fires have spread to 2000 acres per the Irvine Fire Dept.

To See How Orange County Was Affected, Check Out Our Most Recent Photo Gallery.

Both fires, while different in size, only grew in acreage throughout the day, with little hope from county fire officials that they were well on their way to containing them. Two firefighters were hospitalized with burn injuries by Monday evening.

It’s unclear when families will be able return to their homes.

As of 9:30 p.m. last night, the fire was zero percent contained.