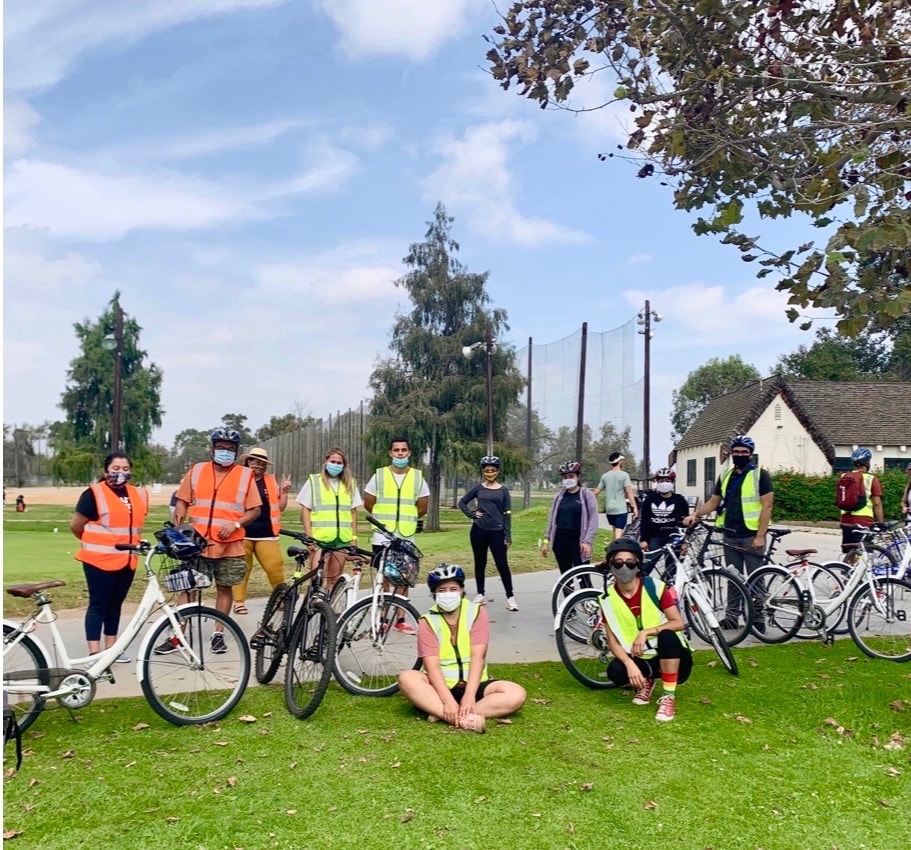 The photo is a Community Bike Ride we co-hosted with Santa Ana Active Streets (SAAS) on October 12, 2020 to demonstrate the need for well-maintained recreational spaces during COVID-19. Residents are inside the Willowick Golf-Course. This picture was taken minutes after we were questioned by the golf course staff as to why we were there.

As a community organizer that has been organizing in the Santa Anita and Buena Clinton neighborhoods for two years I need to respond to Brewer’s recent Op-Ed, which read like shameless self-promotion and feigned to represent that Jamboree’s proposal responds to the needs of residents by calling on elected officials to “listen to the community.”

From February 2019 to July 2019, a handful of community members and I surveyed over 320 residents in the Santa Anita and Buena Clinton neighborhood asking them,” Do you know that the City of Garden Grove intends to sell 102 acres of public land?” At first, their response expressed confusion- many had never heard of or visited the Willowick golf course, let alone knew that the City of Garden Grove intended to dispose of it. But after asking the simple, yet, powerful question, “What would YOU want to see on this public land?” many of the conversations gave insight to two major issues: lack of well-resourced public, open space and the constant rise of cost of living. Overall, 62% expressed the need for open space/parks and 54% affordable housing with priority to open space.

These conversations are iterative and continue to be fundamental in shaping the Rise Up Willowick Coalition. This is why Brewer’s article misrepresents Santa Anita and Buena Clinton residents’ needs and vision for the Willowick site. To be clear, the Rise Up Willowick Coalition has not endorsed any of the developers that seek to monetize Willowick. Nor have we endorsed the Willowick Community Partners, LLC proposal submitted in response to the Notices of Availability issued in March, 2020 by the City of Garden Grove.

Furthermore, Brewer’s op-ed failed to mention that community advocacy pushed the City to follow the Surplus Land Act to dispose of Willowick; after the filing of a lawsuit on behalf of the Rise Up Willowick coalition. Before that, earlier in 2019, the City of Garden Grove had released a Request for Proposal (RFP) which would have sold off Willowick to the highest bidder. Before Willowick Community Partners LLC (WCP) formed its trio with Jamboree Housing, Primestor Development Inc. and City Ventures jointly submitted a bid to the 2019 RFP and have been vying for Willowick since then.

In addition to the Surplus Land Act, Brewer portrays AB1486, as key legislation that validates public land advocates; however, her summary fails to mention that notwithstanding the affordable housing goals, first priority shall be given to an entity that agrees to use the site for park or recreational purposes if the land is already being used and will continue to be used for park or recreational purposes in the local general plan (GOV § 54227(b)). The WCP proposes approximately 34.8 acres of open space but their public open space analysis reveals they include the already existing Campesino Park, the already existing Santa Ana River itself and the private residential gardens with small pocket parks, which arguably is hardly the vision of public accessible open space.

Yet, relying solely on numbers can leave out people’s lived experiences. In our community outreach, residents constantly share the nearby public spaces are under-resourced and poorly maintained. Many do not visit or rely on Santa Anita Park, Campesino Park or the Buena Clinton playground as recreational use and prefer to travel outside of their city to access quality open spaces. Willowick, which is owned by the City of Garden Grove but zoned currently as open space by the City of Santa Ana, should not be seen as an opportunity to satisfy the money driven interests of private developers and elected officials. Willowick is a community asset that needs to be fully utilized as an investment in the overall quality of life for its immediate and existing community residents.

After submitting numerous public records requests we found four proposals were submitted in response to the City’s notices. Out of these four, the only proposal the Rise Up Willowick Coalition supports is the Trust for Public Land, a non-profit organization focused on the protection and creation of open space, in partnership with Clifford Beers Housing, an affordable housing developer, and the CA State Coastal Conservancy. Their proposal not only best honors the Surplus Land Act by prioritizing Willowick’s use for majority accessible, recreational open space but also addresses the concern for the quickly growing cost of living by creating deeply affordable housing. Their proposal creatively transforms Willowick to address some of the current open space/park and affordable housing inequities in our communities. Unlike WCP, this partnership does not propose to incentivize a community asset for economic interests.

For two years, the Rise Up Willowick Coalition has been calling for transparency, accountability and inclusivity with Willowick. Brewer’s Op-Ed, “coincidently” was released the same day the City of Garden Grove posted its City Council agenda expressing its intent to authorize the commencement of the 90-day good faith negotiation period as stipulated in the Surplus Land Act. Although mentioned in the City’s memorandum that it intends to negotiate concurrently with all interested parties, the City has not shared what that process consists of or ensured meaningful public participation during a global pandemic. This is unacceptable and I believe goes against the intention of the Surplus Land Act.

To learn more about the Rise Up Willowick Coalition and how to attend the December 8th City Council meeting in solidarity, please follow us on our social media platforms: Twitter, Instagram and Facebook or email us at [email protected]

Karen A. Rodriguez (she/ella) is one of the Community Organizers for the Rise Up Willowick Coalition. She was born and raised in Santa Ana, CA.

Brewer: It’s Time to Listen to Local Communities When it Comes to Surplus Land Resources