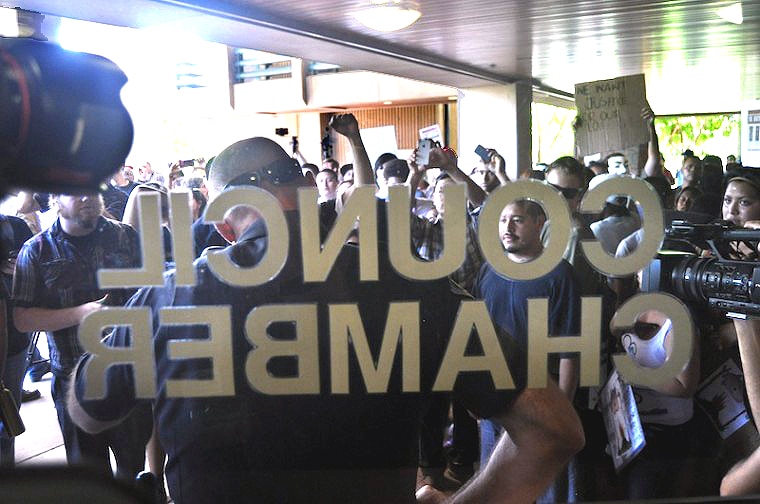 Protesters outside the Anaheim City Council Chamber in July 2012 venting their anger over two police shootings. They weren't allowed into the chamber because it was already at capacity. (Photo by: Brendan Wiles)

They came Tuesday just as everyone knew they would — hundreds of angry Anaheim residents wanting to address their government regarding two police shootings that had occurred on consecutive days over the weekend.

But when protesters appeared at City Hall, they found closed doors and a wall of police.

The City Council chamber was already filled to capacity due to a scheduled discussion of the city’s hotel room-tax initiative. Yet city officials had done little to accommodate the overflow. No one in the packed lobby could hear what was going on in the meeting, and their impression was they would not have a chance to speak.

For a time the protesters stayed in the lobby, some shouting: “Let the people of Anaheim have their say. … Let us through.”

It wasn’t long before this angry display became a riot scene, with protesters, who had been pushed into the street by police, smashing store windows, throwing rocks and setting trash bins on fire. Police ultimately quashed the violence with volleys of rubber bullets and pepper-spray pellets. But before it was over at least 24 people were arrested and six sent to the hospital.

All indications are that this turn of events did not come as a surprise to Anaheim officials. Officers clad in riot gear had been out in full force from the outset. And by the time the night was over, 279 officers from several police agencies, including the California Highway Patrol, had responded to the scene.

Far less clear, however, is whether city officials took any significant steps to prevent the riot.

“There’s no playbook for how to do this correctly,” said Mayor Tom Tait.

Yet there are examples in recent years of preparations made by other Orange County city councils facing angry crowds and controversy.

A year ago as the first Fullerton City Council meeting after the police beating death of transient Kelly Thomas approached, city officials knew they had a potentially explosive situation on their hands. So they made sure a closed-circuit television broadcast of the meeting was shown in both the lobby and a nearby library.

Fullerton officials also made it clear to those who appeared that they would have an opportunity to address the City Council. The result was an orderly line of speakers that snaked from the council chambers into the lobby and outside the building.

“We expected to have overflow and looked at various ways of allowing the pubic to have a voice,” said Fullerton Mayor Sharon Quirk-Silva. “You want to err on the side of giving them the opportunity to express anger and protest.”

In Villa Park in early 2011, when racially charged comments by Councilwoman Deborah Pauly drew a volatile crowd that was too large for the council chambers, city officials placed speakers outside so those who did not make it in could hear what was being said during public comments. The action had a noticeable calming effect on the crowd.

The situation in Anaheim Tuesday was significantly more explosive than those faced by officials in Fullerton and Villa Park, but Tait acknowledges that perhaps more could have been done.

“Could we have been more prepared? Possibly, but I think all in all, we tried our best to accommodate everybody and nd to make sure that those who wanted to speak and protest were given that opportunity.”

“Maybe we should have had speakers outside – in hindsight.”

Police Sgt. Bob Dunn, the police department’s public information officer, said that the city’s civic center simply does not have the facilities to house additional people. “I believe the city did take several steps to prepare for overflow crowds,” he said.

A police officer attempted at least twice to tell those pushing their way through in the lobby that they would have an opportunity to speak. The officer was drowned out by the loud shouts.

And as protesters confronted riot police guarding the doors to City Hall, City Manager Bob Wingenroth sent Joanne Sosa, one of the activists who organized the protest, outside to address the protesters. However, the crowd’s angry shouting had become so loud that even Sosa was drowned out.

“They’re not listening,” Sosa told Wingenroth as she went back into the council chambers lobby.

Police officials also indicated that the riot was unavoidable because “outside agitators” who are not Anaheim residents organized it. Police Chief John Welter at a news conference Wednesday morning said that an estimated two-thirds of the protesters were not from Anaheim.

Welter described a tactical plan that includes throws rocks and bottles from three or four rows back in the protest lines. After inciting a riot, Welter said, the agitators would have fled the scene to let Anaheim residents take the brunt of the police force.

Despite his assertions, Welter could not offer a breakdown or provide evidence that such a plan had been carried out. Of the 24 people arrested, 20 were Anaheim residents, the Orange County Register reported.

Welter said that more arrests would follow after police officials review video taken throughout the night. Those seen on video breaking the law would be tracked down and arrested, he said.

“We will continue to makes arrests wherever possible, and those arrested will be prosecuted,” Welter said.