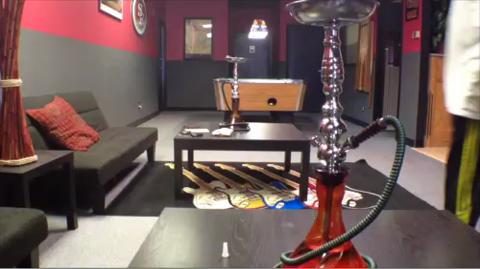 The idea surfaced after plans for a banquet hall and hookah lounge on Brookhurst Avenue — a stretch of road lined with Middle-Eastern businesses and known as Little Arabia — triggered opposition from nearby residents concerned about the effects of second hand smoke wafting from the tobacco water pipes into their neighborhood.

The conditional use permit for Deluxe Banquet Hall was scheduled for approval at the Oct. 8 council meeting. But after protests from residents, the council delayed its decision on the matter pending research on the viability of fully enclosing the lounge, located on a second-floor patio, and installing a smoke filtration system.

It turned out that enclosing the lounge would violate a state law that makes it illegal to smoke indoors at restaurants. Furthermore, an air filtration system and enclosure, which according to the banquet hall owner would cost $300,000, wouldn’t completely eliminate toxic particulates in tobacco smoke, Vander Dussen told the council.

Meanwhile, residents’ fears have apparently diminished after the banquet hall owner agreed to shrink the size of the hookah lounge from 3,800 square feet to 1,834 square feet. Residents didn’t show up in force to oppose the plan as they did at the previous council meeting.

Council members are also happier with the smaller hookah lounge and approved its permit.

“This is such a win-win,” said Councilwoman Lucille Kring at Tuesday’s council meeting. “It’s going to bring a beautiful restaurant and banquet hall to the area.”

But given the lingering concerns from residents, Councilwoman Gail Eastman asked her colleagues to consider a temporary ban of the lounges at their next meeting, scheduled for Dec. 10.

Smoking hookahs, a pastime in many Middle-Eastern countries, has become a nuisance to some residents of the Archer Street neighborhood that runs parallel to Brookhurst.

Residents of that neighborhood wrote letters harshly critical of the proposed banquet hall, citing noise, public safety and second hand smoke problems. They asserted that hookah lounges that already exist in Little Arabia have been problematic.

“Residents cannot sleep at night, cannot be out in their backyards, cannot invite friends to their homes, and cannot even open their windows due to the smoke and noise from these lounges,” reads a letter from Bernice Danker, an Archer Street resident.

Residents took a staunch position against the banquet hall’s opening of a hookah lounge, even though it is located 240 feet from the nearest residential property line and 340 feet from the closest home. According to a staff report, there are no local standards that require a distance greater than “80 feet between smoke sources and people.”

The idea of an emergency ordinance already has at least one high profile opponent, Mayor Tom Tait. Tait, who leans towards the libertarian, said he knows of only one hookah lounge in Little Arabia that might have been a nuisance.

“I don’t know what the problem is. If people want to smoke and they’re not bothering anybody, we shouldn’t interfere,” Tait said. “People have rights. That’s what liberty’s about.”