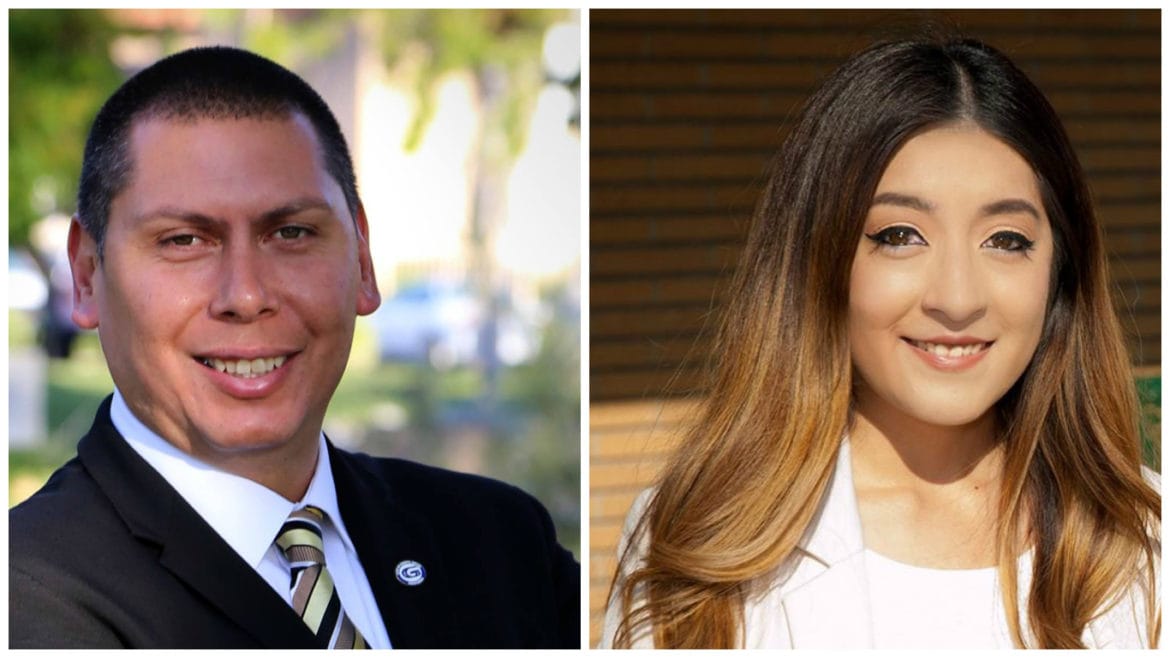 Regardless of who wins Garden Grove’s newly established District 6 City Council seat in next Tuesday’s election, the first council member of Latino descent in the city’s 60-year history will be sworn in with the new council in December.

The choices for voters in this majority Latino district on the east side of town, where the streets begin to meld into Santa Ana, are two Democrats: Rickk Montoya, a 42-year-old 911 dispatcher for the city of Los Angeles; and 25-year-old Kim Nguyen, a second-generation Vietnamese Latina who works for CalOptima.

Montoya was 10 years old when he and his single mother moved to the East Garden Grove neighborhood that he still calls home. After graduating from Santiago High School, he spent a decade in the Army and was staff director for the U.S. Commander in Camp Bondsteel, Kosovo.

He is a member of the Arts, Parks and Recreation Commission, the Orange County Democratic Party Central Committee, and is president of the Southern California chapter of Cure SMA (Spinal Muscular Atrophy). He ran an unsuccessful campaign for council in 2014.

Like Montoya, Nguyen moved to Garden Grove at the age of 10 and also graduated from Santiago High School.

Nguyen’s background reflects the city’s unique ethnic mix as she is the daughter of a Mexican house cleaner and Vietnamese machine inspector. She’s a first-generation college student who worked her way through the University of California, Santa Cruz, where she earned a degree in political science.

Nguyen’s political experience is limited to her work interning and volunteering for former state Senator Lou Correa, who is now running for U.S. Congress.

Montoya and Nguyen are facing off against each other by virtue of a California Voting Rights Act lawsuit filed in 2015 that alleged the city’s at-large election system disenfranchised Latino voters, who make up 37 percent of the city’s population but have never held a seat on the City Council. The suit was settled when the city agreed to establish a new district-based system.

Feuding Over Credit for District Elections

Despite their many similarities, Montoya and Nguyen have spent the past several months in a spat, which has divided the local Democratic Party, over who deserves the most credit for the city’s new electoral system.

Montoya, who filed the lawsuit that forced the city to implement district elections, has been endorsed by several labor unions and the Democratic Party of Orange County.

Some residents – including Montoya – have raised questions about whether Nguyen drew the district map she submitted, or if her campaign manager Claudio Gallegos, who has drawn maps for districting efforts countywide, drew the map and she used it to launch her political career.

Nguyen has rejected those claims and said such criticism is part of a prejudiced and suspicious attitude toward young people of color who participate in politics.

“Everyone says, ‘you need to get more involved,’ but the second I got involved, people said, ‘you are coming out of nowhere,’” Nguyen said. “I’m 25 – when was I supposed to get engaged, between trying to get a job and stabilize my life? I was limited in what I could do – but I am getting involved now so I don’t see why it’s such a big issue.”

Montoya, meanwhile, has been criticized for deciding to file a lawsuit against the city rather than pushing for district elections through other, less costly channels.

The council opted to settle the lawsuit and adopt district elections within 3 months, and paid $290,000 for his attorney’s fees.

Nguyen’s campaign has attempted to link the settlement paid to Montoya’s attorney, Kevin Shenkman, to a $2,500 campaign donation from his firm, Shenkman & Hughes.

“Was that money from the settlement? Did the GG taxpayers unwillingly give Rickk a fundraising boost?” Gallegos wrote in a text to a reporter.

Shenkman said that the settlement money was split by his and two other law firms, and represented 3 percent of his firm’s revenue in 2015.

“Rickk received none of the fees/costs awarded to us by the court; in fact, it would probably be illegal for us to share those fees with Rickk,” Shenkman said in an email. “The $2,500 we contributed comes out of my pocket, not from the City of Garden Grove.”

A Diverse and Divided Community

Both Nguyen and Montoya say one of their major goals for public office would be to increase civic participation and connectedness in District 6.

Nguyen said that through her door-to-door outreach she met residents who were unsure of whether they were in Santa Ana or Garden Grove.

Montoya recalled the first public meetings about the district mapping process held in the Buena Clinton neighborhood, where most attendees spoke or understood limited English and didn’t understand the purpose of district elections.

“In Buena Clinton, they don’t understand how the City Council works, what their responsibilities are or what the city’s responsibility is toward them,” said Montoya. “It’s a simple lesson, but language is a huge issue.”

From Nguyen’s perspective, Garden Grove, while having a strong record of electing Vietnamese American candidates, is still dominated by the white establishment. She said for many immigrant communities, especially Latinos, decades of being ignored by elected officials has engrained an attitude among some that government is irrelevant or unresponsive.

Political differences have often pitted the communities against each other during elections countywide. Vietnamese voters have tended to affiliate with the Republican Party (although that trend is changing) and Latino voters with the Democratic Party.

In 2010, during her race against Vietnamese Republican state assemblyman Van Tran, Congresswoman Loretta Sanchez was accused of stoking racial tensions when she remarked on Univision that “the Vietnamese and the Republicans are…trying to take this seat…and give it to this Van Tran, who is very anti-immigrant and very anti-Hispanic.”

Nguyen said that Latinos and Asians are more similar in culture than most people recognize.

“They are almost identical, in the sense of their core values and traditions, they just do it differently,” said Nguyen. “The problem is for so long, we’ve been siloed off and told, ‘they’re the enemy.’”

The small coalition of Vietnamese and Latino community groups that supported Nguyen’s map lauded it as a historic partnership between the two communities.

“My role is to be a bridge to see that…we’re going to be fighting for the same thing,” said Nguyen.

“I’d like to try to find a way to bring them out of their houses…and hopefully that will start to get people to work together.”

Both say the city needs to hire more police officers but emphasize that in the long run, the city must shift toward a community-policing strategy where officers are walking the streets and getting to know the residents in each neighborhood.

They also believe that increasing after school programs, youth opportunities and facilities like parks would help prevent crime and improve the quality of life for many of the district’s residents.

Nguyen believes the city’s focus on tourism along Harbor Boulevard are big revenue generators, and should remain the city’s main economic development strategy.

“But I think we need to look at other projects too – there are a lot of small mom and pop shops, that we need to make sure they’re doing okay,” said Nguyen.

Montoya criticized the past use of subsidies and of eminent domain to acquire properties for private development, such as the Travel County RV Park, which was purchased by the city’s redevelopment agency and given to the developer of the Great Wolf Lodge Waterpark Hotel.

“At this point, [the developments] are a done deal, they need to be followed through with,” Montoya said. “[But] I’m trying to…alleviate as much of the damage to the communities surrounding it.”

He said if the city wants to continue capitalizing on its proximity to Disneyland, they need to attract new retail centers and restaurants for both tourists and residents.

“It’s great to stay at the Great Wolf Lodge, but where are they going to go?” Montoya said.