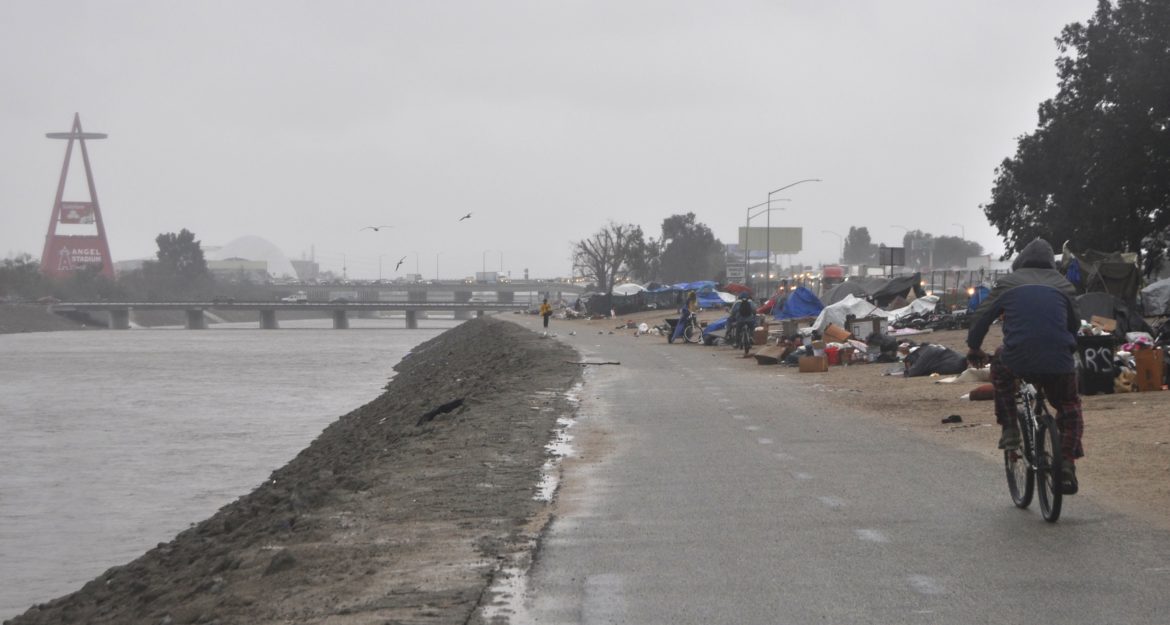 Part of the homeless encampment along the Santa Ana riverbed, as seen Friday amid heavy rains.

Dozens of homeless people living at a mile-long section of the Santa Ana River will now have several days to move out of the area, after Orange County officials settled a federal lawsuit filed by the American Civil Liberties Union.

The settlement agreement, which went into effect yesterday, extends the deadline to Thursday for people to leave an encampment on the eastern banks of the river, next to the 57 freeway from Orangewood Avenue near Angel Stadium to just south of the 22 freeway.

The settlement was announced just as a major rain and windstorm moved into the county, which lacks enough shelter space to house most of its homeless population.

New signs have been posted in the area warning people that February 23 is the “final date” for people to remove their belongings and move out. After that day, property will be seized and those who stay could be prosecuted for trespassing, the signs warn. 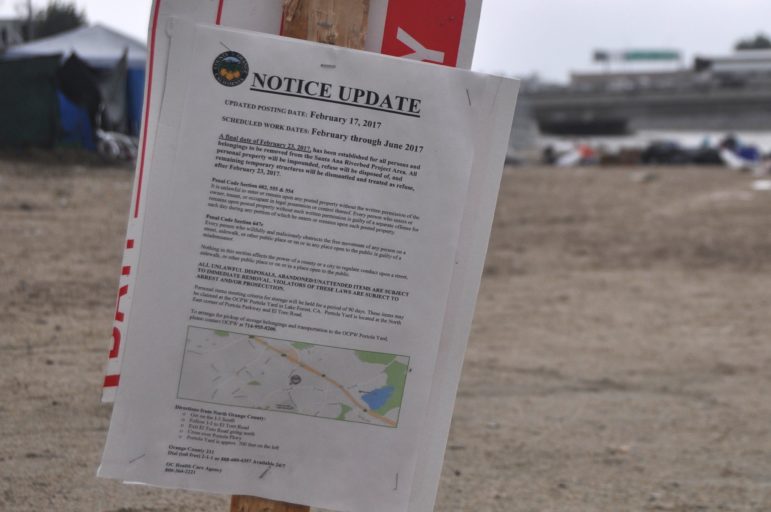 A new notice along the riverbank, in a photo taken Friday.

Until then, county officials will not restrict access to the area and will help people move their belongings out, according to county spokeswoman Carrie Braun.

“We were heartened to see Orange County do the right thing to address the emergency situation in the riverbed,” said Brendan Hamme, a lead attorney on the case for the ACLU of Southern California. “But the county still has much work to do to provide desperately needed permanent housing for the many people without it.”

(Click here to read the settlement and here for the new notices.)

The area has been the subject of intense debate recently, with advocates harshly criticizing county supervisors for trying to remove homeless people from what activists describe as a last-resort refuge amid a shortage of shelter and housing options. 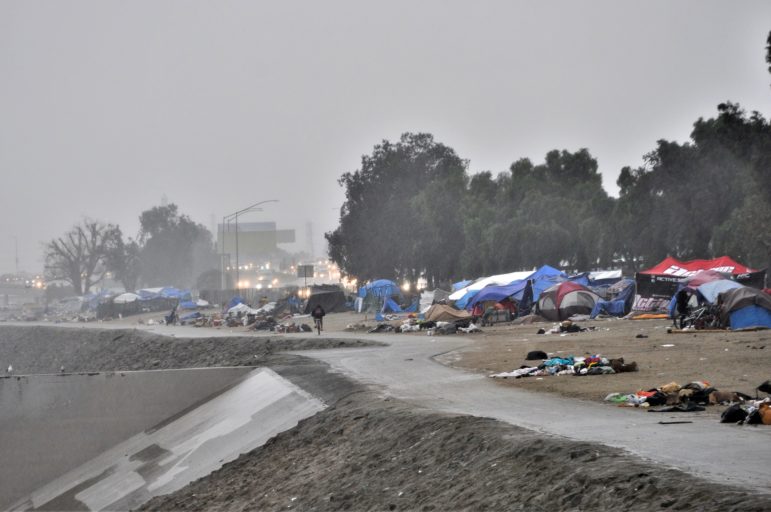 Several people who lived in the area have been forced to move in recent days by county workers and sheriffs’ deputies, advocates say.

County officials, meanwhile, say the encampment is on a restricted county maintenance road, and that officials need to store boulders and sand there for public works projects.

After new county fencing went up last week, the ACLU sued, alleging that officials had effectively “imprisoned” at least 75 homeless people who live along that part of the river, cutting them off from food, water, and medical care.

County officials disputed such claims, with Supervisor Shawn Nelson calling them “ridiculous” and “dishonest.”  But the county quickly moved to settle the case, just before a federal judge was slated to decide Thursday whether to issue a restraining order against the county.

Under the settlement, the county agreed to extend the eviction date to Feb. 23 and post clear notices in the area to let people know.

(Click here to see a map of the project area.)

According to the notice, property seized after the deadline will be held for 90 days and can be claimed by appointment at a public works yard in Lake Forest, near the corner of Portola Pkwy. and El Toro Rd.

For those seeking to claim property there, the county will provide free bus passes or other transportation to the storage area, and from the storage area to anywhere in Orange County besides the riverbank, according to the settlement.

County officials also promised to allow “adequate” access into and out of the encampment area until next Thursday’s deadline and “ensure access for emergency vehicles and personnel,” both of which were key concerns among homeless people and advocates.

Despite the settlement, county officials contend in the agreement “that the Santa Ana Riverbed and Project Area are not safe for public access, use, or habitation.” And they reserved “the right to respond to and address illegal activity occurring on [riverbed] property.”

The county also agreed to pay the ACLU’s attorney fees for the lawsuit. If any of the settlement terms are violated, the ACLU can take the county to court again to make sure it’s enforced.

In a one of the most recent ACLU lawsuits against the county, the county ended up losing in federal appeals court and had to pay nearly $4 million in legal fees to the civil rights group.

County officials are also facing a separate federal lawsuit over the riverbank evictions, which was filed Monday by attorneys Carol Sobel, Brooke Weitzman, and others.

The suit claims that the county has illegally “seized personal property and largely destroyed it without an opportunity for the rightful owner to reclaim it,” in violation of rulings by the U.S. 9th Circuit Court of Appeals.

County officials haven’t yet filed a response in that case.

As for where homeless people living in the encampment should move to, the county says it doesn’t have a recommendation but does offer referrals to shelters.

“The County has not advised the homeless where to relocate, but the Health Care Agency Outreach and Engagement Teams continue to offer resources and shelter options to individuals encamped in the area,” said Braun, the county spokeswoman, in an email.

Homeless advocates, meanwhile, are focusing on getting county supervisors to follow through on key aspects of their plan to end homelessness. A coalition of various community, business and faith groups is being formed to support the effort, activists say.

“While the settlement addresses the false imprisonment of the homeless at the riverbed, it does not address the homelessness crisis in the OC,” the ACLU said in a statement Friday.

“The OC is one of the most affluent counties in the nation, but has yet to adequately fund its Ten-Year Plan to End Homelessness that it passed back in 2010 and provide permanent supportive housing for its most vulnerable residents.

“The ACLU SoCal continues to monitor the situation, reaching out to impacted people and informing them of their rights under the settlement agreement, and remains committed to working with the county to ensure that homeless residents are treated fairly and given the resources and housing they need to succeed.”

Voice of OC staff writer Thy Vo contributed reporting to this story.