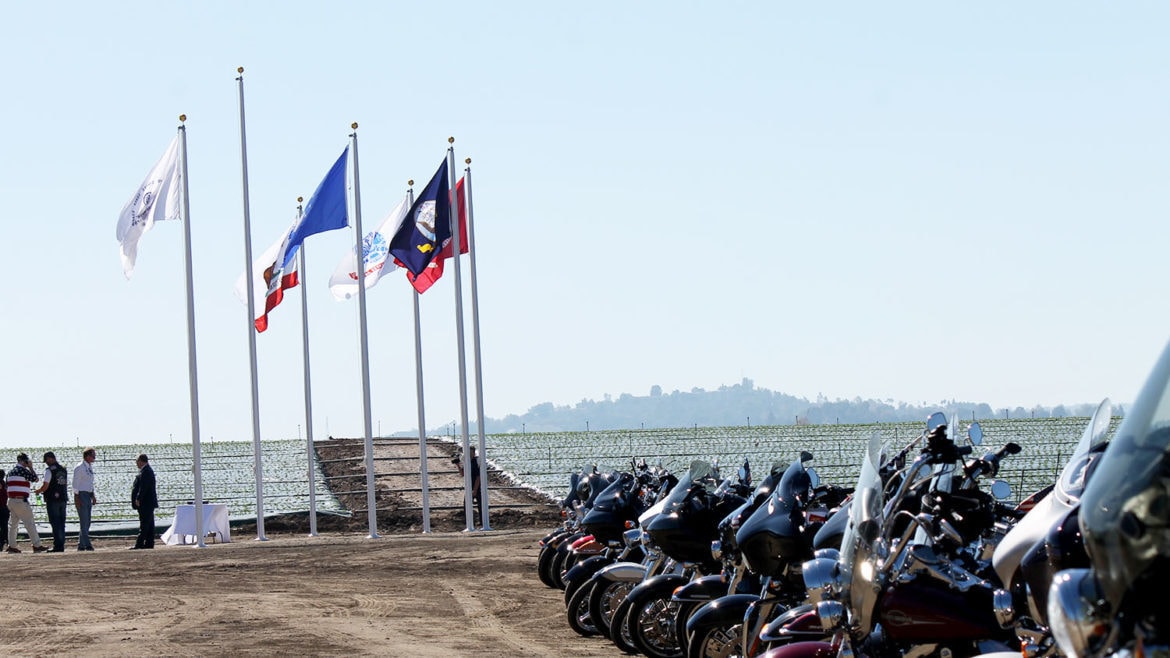 Irvine dedication Oct. 27, 2017 of Orange County veterans cemetery on strawberry fields near the 5 and 405 freeways.

Orange County’s long-anticipated veterans cemetery took a big step forward in 2017 with a developer’s land swap that moved it from the heart of the former El Toro Marine Air Corps Station to strawberry fields near the junction of the 5 and 405 freeways.

And then a petition to overturn the zoning ordinance needed for the land swap gathered enough signatures the City Council will decide at its Jan. 9 meeting whether to overturn their decision to move the cemetery site or put the issue on the ballot and leave the decision to voters, according to a Dec. 21 city press release.

Both sites were part of the El Toro base, but the original proposed cemetery site still has barracks, hangars, jet testing buildings, taxiways, an active Federal Aviation Administration antenna array and other miscellaneous buildings on it. The strawberry fields, which sat at the end of a runway at the edge of the base, has no buildings on it.

Before a voter petition and a lawsuit were filed that could determine the future location of Orange County’s first veterans cemetery, there was a battle in the Irvine City Council about where the cemetery would be built and who would pay for it. It had been nearly a year since any progress was made until a lively council meeting in April.

The veterans cemetery was at a standstill in the beginning of 2017. Then two requests from two different council members were considered at the April meeting that, once again, got the ball rolling.

One request was from Councilwoman Christina Shea, who wanted to start a 125-acre land swap with developer FivePoint Holdings that would trade land next to the Great Park and near the heart of the former El Toro Marine Corps Air Station for FivePoint-owned 125-acre strawberry fields on Bake Parkway, next to the 5 and 405 interchange.

The other proposal was from Councilman Jeff Lalloway, who wanted to keep the cemetery at the original 125-acre hangar site near the heart of the old El Toro base and pledge $38 million of city funds to help construct the cemetery.

The estimated price tag on the hangar site is nearly $80 million for the first phase, according to a California Department of Veterans Affairs (CalVet) report.

Along the way, Lalloway, along with then-Mayor Pro Tem Lynn Schott have loudly criticized the swap and are steadfast in building the cemetery at its original site. The two have voted against anything to do with the land swap — effectively making every council vote on the swap or its details a 3-2 decision.

Shea was appointed mayor pro tem last month, while Schott rotated back to a councilwoman.

The meetings pitted residents against residents and veterans against veterans on where the location would be.

One side favored the original site because — as many veterans said throughout the months — it was the last place many Americans stood on U.S. soil before being sent off to World War II, Korea or Vietnam.

The other side said the swap for the strawberry fields was best because it would save taxpayers money, could get built quicker and the location is more visible and accessible because it’s next to two freeways.

Assemblywoman Sharon Quirk-Silva (D-Fullerton), who spearheaded the 2014 effort to secure the cemetery through the Legislature, said $10 million would come from Federal grants and was asking the State for nearly $30 million to help complete the first phase for the hangar site.

The original site would have racked up at least $30 million in demolition costs and another $30 million to construct the first phase of the cemetery, which would have housed the remains of approximately 5,000 veterans, according to the CalVet report. Subsequent phases would have added more graves and cremation tombs over time until they reached a buildout of more than 200,000.

While the strawberry field site still has no official estimated costs or site plans because CalVet is just starting the site study, FivePoint has pledged $10 million toward construction, so long as the developer gets its entitlements transferred with the site, including 812,000 square feet of research and development space and nearly 9,000 daily commuter trips allowed in and out of the land it would take over near the heart of the former base.

A Visit From the Governor, Rumors and a Land Swap

The city was considering both proposals until a visit from Gov. Jerry Brown and a more detailed land swap offer from FivePoint came in. Brown, while not initially stating his preferred site, eventually told a May press conference in the Great Park he favored the strawberry fields.

All was quiet in Irvine until three months later when some claimed, including FivePoint CEO Emile Haddad, the city was only going to transfer parts of the land to CalVet for the cemetery and build a hotel on the other portion.

Shea and Councilwoman Melissa Fox were critical of ironing out the land swap details in a closed session. They both said they were against anything less than an immediate 125-acre transfer to CalVet. Both Shea and Fox said they might not have gone into the closed session if the details of the swap were going to be discussed there.

A Petition and Lawsuit That Could Determine the Cemetery’s Future

At the same time Pope and Agran were gathering signatures, the strawberry fields site was dedicated to the veterans in late October, complete with a flag raising ceremony, a 21-gun salute and two flyovers by World War II-era fighters and a bomber. Wagner, the day before, signed documents that finalized the land swap.

On Dec. 21, the count was finalized and the City Clerk will certify the count at the Jan. 9 council meeting, when council members will decide to overturn or leave it to voters in either a special election or a regular election, according to a press release.

Orange County Memorial Veterans Memorial Park Foundation Chairman Bill Cook has said the actions of the petitioners could jeopardize the future of the cemetery, especially now that there’s no more financial commitment to the original site from anyone. Cook and the foundation were part of the efforts to secure a cemetery site.

The same day the signatures were filed, Agran quietly filed a lawsuit against the city that challenges the zoning ordinance required for the land swap. The lawsuit alleges the city didn’t follow the law when it decided to move the cemetery. The original site was the product of a city ordinance, the lawsuit claims, so a land swap also would have to be done through an ordinance, as required under state law.