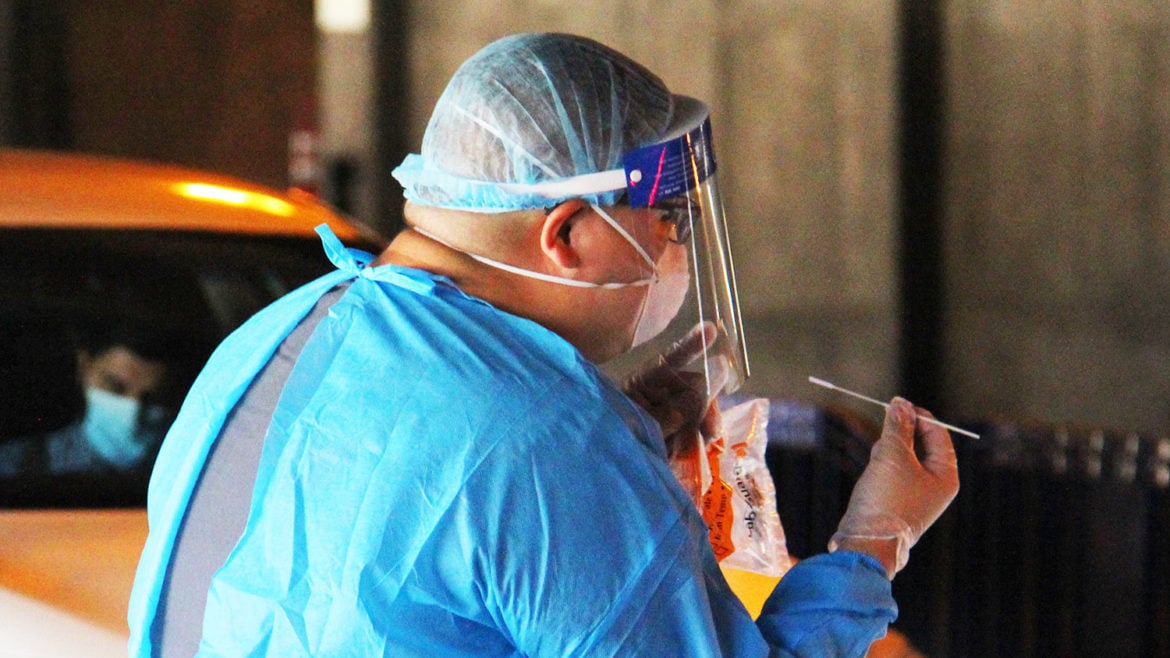 Courtesy of City of Anaheim

A healthcare worker holds a swab during the July 15, 2020 drive up at the Anaheim Convention Center.

Six weeks after the Orange County Board of Supervisors opened the county’s largest coronavirus testing site, they are now directing that its registration form be made available in languages other than English.

Orange County’s lack of sign-up forms in other languages at the Anaheim Convention Center “super site” has drawn attention for weeks, after Voice of OC first reported on it and public statements by the county’s health director that it’s a barrier for people to get tested. Two weeks ago, county supervisors raised no concerns or questions when the language barriers were discussed publicly by the health director, Dr. Clayton Chau.

That is now changing. On Tuesday, supervisors directed county staff to translate sign-up forms for the testing site and create a call center in multiple languages. One supervisor said the lack of translation came despite a policy requiring it.

“I also want to kind of remind everyone that this board passed a policy [in April] to have – basically to comply with the law, to have our county information be available in the five major languages,” Supervisor Andrew Do said at the board’s Tuesday meeting, when discussing the translation directive he and Supervisor Doug Chaffee brought forth.

“And so in the future, I would like – when we undertake something as important as testing – that we ought to move a little bit faster in making it available – the information, at least – available in the five languages that we talked about,” Do added.

Later in the meeting, when the translation directive came up for approval, Do said the county has a lot to feel good about in its approach to coronavirus.

“The work that we have done so far at the county really has been dovetailing really well with the state, pretty much from the beginning of this COVID-19 crisis,” Do said.

The county’s translation comes five months after local activists, doctors and community leaders publicly called out critical gaps in information and outreach about the coronavirus to immigrant families and businesses where English isn’t the first language.

The supervisors’ action directs health officials to provide translation for the county’s drive-through test sites, as well as sign-up forms in English, Spanish, Vietnamese, Korean and Chinese, and set up a call center.

This week, county officials also announced their second drive-through testing super site, at the Orange County Fairgrounds in Costa Mesa, would be opening on Wednesday. The statement came six weeks after Do said at the July 14 supervisors’ meeting that a second testing site would be set up at the fairgrounds.

The main testing center, at the Anaheim Convention Center, has been touted as helping provide better testing access in the hard-hit largely Latino communities of West Anaheim and Santa Ana.

At a supervisors meeting two weeks ago, Chau noted there were no language options besides English to sign up for testing at the Anaheim super site, and cited it as a potential barrier that could help explain why many of the available appointments aren’t being booked.

No supervisors asked any follow up questions about it or expressed interest then in making the sign-up page available in Spanish or other languages besides English.

After Chau noted the lack of translation, Supervisor Don Wagner seemed to publicly take issue with the county encouraging people who have coronavirus symptoms to get tested, saying it would likely lead to a higher rate of people testing positive – something that could delay reopening plans.

Two days later, in response to a question from Voice of OC at a county news conference on Aug. 17, Chau said the sign-up form would be posted soon in Spanish and Vietnamese, and that Korean was being looked at as an option as well.

As of Monday, a week and a half later and nearly six weeks since the testing site opened, the sign-up page was still only available in English.

Asked on Monday why the translations haven’t been posted, county health officials said it takes multiple days to translate, verify and upload them. By Wednesday a Spanish-language sign up page was available.

The Spanish sign-up form would be posted online on Tuesday, followed by additional languages by Friday of next week, Dr. Tamarra Jones, division manager of health promotion and community planning at the Orange County Health Care Agency, said Monday in response to written questions from Voice of OC.

“The Spanish translation will be live tomorrow, August 25, 2020. The other languages, including Vietnamese, Chinese, and Korean, are anticipated to be available by September 4, 2020,” Jones wrote.

“The registration form has a significant amount of text that required several days for the translation to be completed and verified for accuracy,” she added. “Once translated, the lab must incorporate those changes into the registration system, which also takes several days to update and test before it is released for public use.”

When it came to county grants for restaurants that say they’re following pandemic safety rules, within the first week of the program the application was available in multiple languages, including Spanish, Vietnamese, Korean and Chinese.

Residents have questioned whether the county actions in these instances reveal skewed priorities amid the biggest public health crisis in a century.

In reply to such questions, Chau has emphasized that the Anaheim Convention Center super site isn’t the only one available. He pointed to separate mobile testing sites through the county’s Latino health initiative, which offer a total of 400 tests per day compared with 1,000 per day at the convention center site. Chau has previously said the mobile site appointments fill up quickly.

“The Latinx Equity Initiative also runs four different tests per week,” Chau said in his response at a news conference last Thursday. “And all of those sites have people who help folks to register to get tested in English, in Spanish, in Vietnamese, and by phone. And in Korean as well, because that initiative works with multi-ethnic community organizations.”

West Anaheim and nearby Santa Ana continue to be the hardest hit by coronavirus, on a per-resident basis, among all cities in Orange County, as the virus strikes working class Latino neighborhoods especially hard. Many residents in these communities are essential workers, like grocery clerks and warehouse distributors, while they wrestle with trying to quarantine in overcrowded housing.

At the same late June news conference, Supervisor Do announced that officials had just signed a contract that day to translate coronavirus information into the non-English languages that are most common in Orange County.