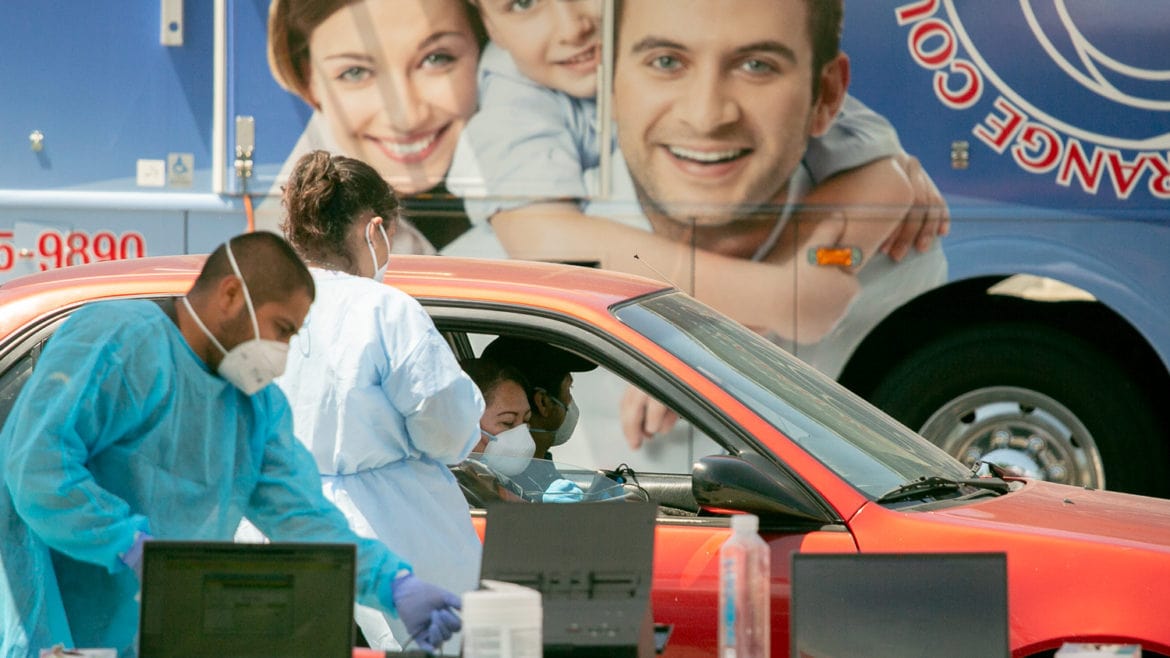 Orange County public health officials are planning on publishing the definition of a coronavirus outbreak, but won’t list the actual outbreaks around the county as officials continue to push for more businesses to reopen.

“So far, we’re not planning on posting outbreaks for the restaurants and I talked about how to define outbreak. That is a process and actually we’re getting ready to publish on our website — the definition of outbreak and how that process would work for each and every business sector including the schools,” county health officer Dr. Clayton Chau said at a news conference last Thursday.

An outbreak, according to state guidelines, is three or more confirmed cases in people who live in different households within the same location in a two-week period.

Although there hasn’t been any reported outbreaks in high schools and younger, there have been cases slowly trickling out of the schools.

“We do have cases, but they are not linked to each other and most of the infection happened in the community,” Chau said.

It’s been up to parents and local school districts to report those cases to the public.

Irvine Unified School District was the first in the county to begin publicly reporting confirmed cases and virus exposures at its schools earlier this month. As of Monday, seven students at separate schools have tested positive for the virus and five staff members have also tested positive.

Los Alamitos Unified School District followed suit not long after. Last Friday it reported its first student confirmed case at its high school, which has nearly 3,000 students and staff back in classrooms.

As of Tuesday, a second case was reported at Los Alamitos High School, according to the district website.

“I — certainly having been a part of leadership at the county level — believe that so many of the residents depend on that degree of transparency of information to plan effectively on where they may or may not go,” Ghaly said in response to Voice of OC’s questions during last Tuesday’s news conference.

“We work to share best practices across counties and I don’t want to get into specifics about Orange and LA or other counties, but certainly I think as we get deeper and deeper into our response, the transparency of information not only at the state level, but at the county level, is very, very important,” he said.

During a Monday news conference, Newsom said he’s deploying teams to various theme parks around the state and country to study the issue.

“We’ll be visiting with some of the larger theme parks, continuing some of those conversations back and forth. … to get where i know where everyone wants to go, and that is to get people back to work,” Newsom said. “We need to do so with a health-first frame.”

“We absolutely reject the suggestion that reopening the Disneyland Resort is incompatible with a ‘health-first’ approach. The fact is, that since March we have taken a robust science-based approach to responsibly reopening our parks and resorts across the globe,” Hymal said.

“Our health and safety protocols were developed in consultation with epidemiologists and data scientists, and after considering guidance from the Centers for Disease Control and experts in local government and health agencies,” she said, noting Disney’s other theme parks are open.

At a Tuesday news conference, Ghaly said the theme park teams will study the virus’ effects beyond the park.

He said the teams will examine “how a park operates, how a community around it functions when the park opens at a time when we’re facing COVID transmission and how it plays out not just in the park, but beyond.”

As of Tuesday, the Anaheim neighborhood just outside Disneyland had a testing positivity rate of 7.4 percent, more than twice the county average, according to county Health Care Agency data.

Under the state’s four-tiered business reopening system, OC will have to bring down positivity rates in poor neighborhoods to less than 5.2 percent.

According to state data, the average positivity rate for poor, working class neighborhoods is 6.5 percent.

Orange County Supervisors have railed against the new metric and are lobbying the state for some type of flexibility and local control in the issue. But confusion and health order walkbacks happened the last time it was up to local officials.

Since the pandemic began in March, the virus has killed 1,341 county residents out of 56,070 confirmed cases.

Hospitalizations have seen a decline since last week.

As of Tuesday, there’s 160 people hospitalized, including 57 in intensive care units.

Nearly 958,000 have been tested throughout OC, which is home to roughly 3.2 million people. Some people, like frontline medical workers, get tested numerous times.

While the Health Care Agency won’t release outbreaks at schools or businesses, Chau said they’ll be working with Anaheim and Buena Park officials to help control virus transmission if Disneyland and Knott’s Berry Farm open sometime down the road.

“We have a relationship with the city of Anaheim. [county CEO Frank Kim] and I have a conversation with the city managers on a weekly basis and, yes, we have a plan  to work closely with the cities,” Chau said at Friday’s news conference.

While Chau didn’t offer specifics on how that partnership will work, Anaheim’s code enforcement department has been making sure businesses follow coronavirus guidelines.

“Our code enforcement is very busy on following up on tips we get from the community in making sure our businesses are complying,”. Deputy City Manager Greg Garcia said at a late August City Council meeting.

“Also, businesses are calling us asking about compliance.”

Spencer Custodio is a Voice of OC staff reporter. You can reach him at [email protected]. Follow him on Twitter @SpencerCustodio
What is COVID-19? Do I have it?