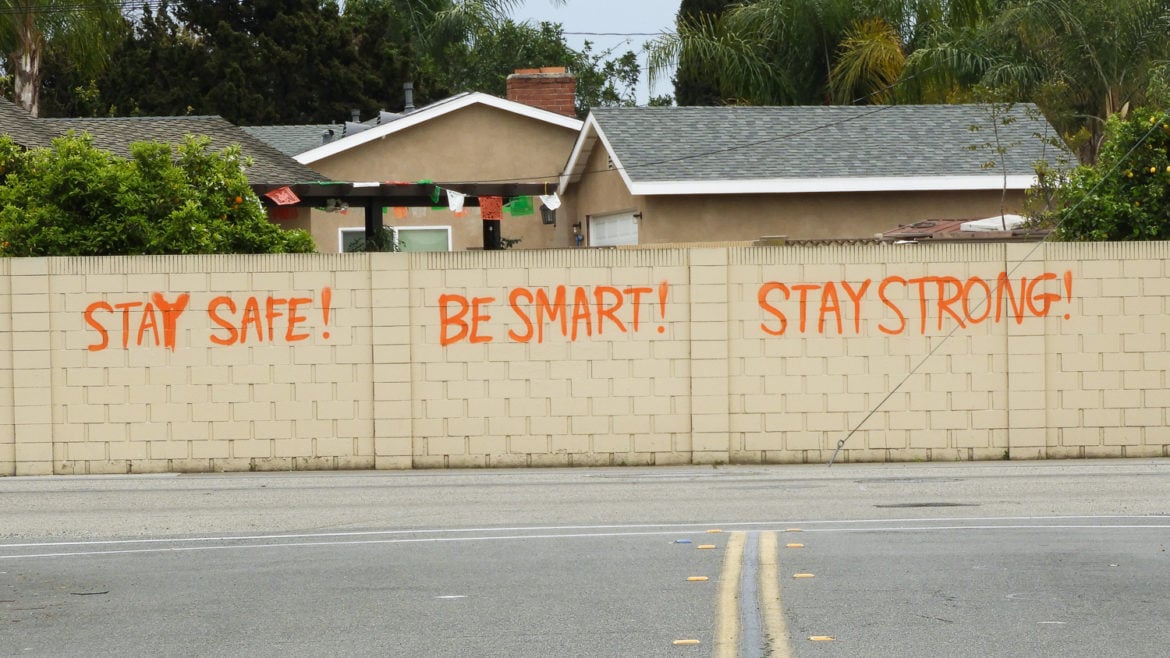 Tagging on Ball Road in West Anaheim when the pandemic first kicked off. March 18, 2020.

Orange County’s second coronavirus wave could mean a repeat battering for working class, often immigrant neighborhoods in North and Central OC, which were disproportionately hit by the first wave.

Coronavirus positivity rates in pockets of Anaheim, Fullerton, Garden Grove, Santa Ana and Westminster are quickly approaching double digits, with one neighborhood outside of Disneyland sitting at 11.5%, as Orange County’s hospitalizations steadily increase.

The county’s overall positivity rate sits at 4.6% as of Friday, while some neighborhoods are grappling with nearly one in 10 people testing positive for the virus.

The pandemic has put a renewed focus on inequality across Orange County as health disparities have come to the forefront of public health discussions.

Coronavirus hits the poor, often minority neighborhoods, particularly hard because many residents live in overcrowded housing, little open space, lack access to health care and don’t have the option of working from home.

“Santa Ana and Anaheim have been hammered a couple times already in our local epidemic. And I know [UC Irvine] has put in efforts into this, and worked with some of the community based organizations like Latino Health Access and  OCAPICA (Orange County Asian and Pacific Islander Community Alliance),” UC Irvine epidemiologist Daniel Parker said in a phone interview.

Orange County’s two largest cities, Anaheim and Santa Ana, make up roughly 21% of the population, but account for over 36% of all OC virus cases. Each of those cities has over 11,000 cases. Meanwhile, Garden Grove has the third highest number of cases in OC with over 3,700, followed by Fullerton with nearly 3,330 cases.

Anaheim and Santa Ana also have the highest number of deaths at roughly 43% of the 1,540 who’ve been killed by the virus as of Friday, according to data from the county Health Care Agency.

“We’ve seen, over the past few months all across the country, that it’s working class, people of color, communities of color that are most affected. Primarily because the community members don’t have the ability to engage in social distancing, or they work in public facing jobs where they have to encounter other people,” Shin said.

Shin also said many generations of families often live in the same house, which means vulnerable, older people could be easily exposed to the virus.

Latino Health Access has also partnered with local grocery stores to deliver food to people who have the virus and need to quarantine. They also work with the county to get hotel rooms so people who live in overcrowded housing can quarantine if they have the virus, helping stem further virus spread.

Latino Health Access’ efforts worked, bringing down positivity rates in pockets of that county from nearly 20% to single digits over the past few months.

The Santa Ana based nonprofit went from 40 community health workers in June — known as promotores — to nearly 100 today. The promotores live and work in the neighborhoods they serve.

Parker said it’s a testament to the effectiveness of Latino Health Access.

“Part of me thinks it’s really sad we don’t have a coordinated federal response, to a state response that translates into a local response to these neighborhoods. But on the other hand, when I see organizations like Latino Health Access, I think ‘oh my gosh, who can do better than them?’ They’re embedded in the communities — they have the trust,” he said.

“So I hope that those communities are better prepared now as we go into another wave,” Parker said.

Meanwhile, hospitalizations continue to steadily climb in the county, causing some public health experts to question if Orange County’s hospitals have enough beds and staffing to handle the surging patient load.

As of Friday, 333 people were hospitalized, including 102 in intensive care units.

At the beginning of November, 183 people were hospitalized, with 60 in intensive care units.

By the end of June, over 550 people were hospitalized, with nearly 200 in ICUs.

And by mid-July, over 700 people were hospitalized, including nearly 250 in ICUs.

The worsening case spikes and virus trends caused state public health officials on Monday to move Orange County back to the most restrictive tier, Purple Tier, on the state’s four-tiered business reopening system.

The move back to Purple Tier ended indoor operations at restaurants, gyms, places of worship and movie theaters, while further limiting indoor operations in the rest of the businesses. Most college classes — except lab classes — will also be moved back to video conferences.

Elementary, junior high and high schools that have already reopened won’t be affected by OC’s move back to the Purple Tier.

All of Southern California counties now sit in the purple tier.

OC residents, along with all Californians living in Purple Tier counties, will face a statewide curfew beginning Saturday night.

Gov. Gavin Newsom’s order, issued Thursday, calls for people to stay home, except for essential travel, between 10 p.m. and 5 a.m. That means people can still go to grocery stores, gas stations and other essential services during those hours.

The curfew also closes all nonessential businesses from 10 p.m. to 5 a.m. Although restaurants will still be able to do deliveries during those hours.

Newsom and state public health officials said they hope the curfew will slow the spread of the virus.

“The Governor’s latest health orders have created a significant amount of uncertainty in the community regarding the feasibility and constitutionality of enforcing modified stay-at-home orders,” Barnes said.

He said it’s a matter of personal responsibility.

“Let me be clear- this is a matter of personal responsibility and not a matter of law enforcement. Orange County Sheriff’s deputies will not be dispatched to, or respond to, calls for service to enforce compliance with face coverings, social gatherings, or stay-at-home orders only. Deputies will respond to calls for potential criminal behavior and for the protection of life or property.”