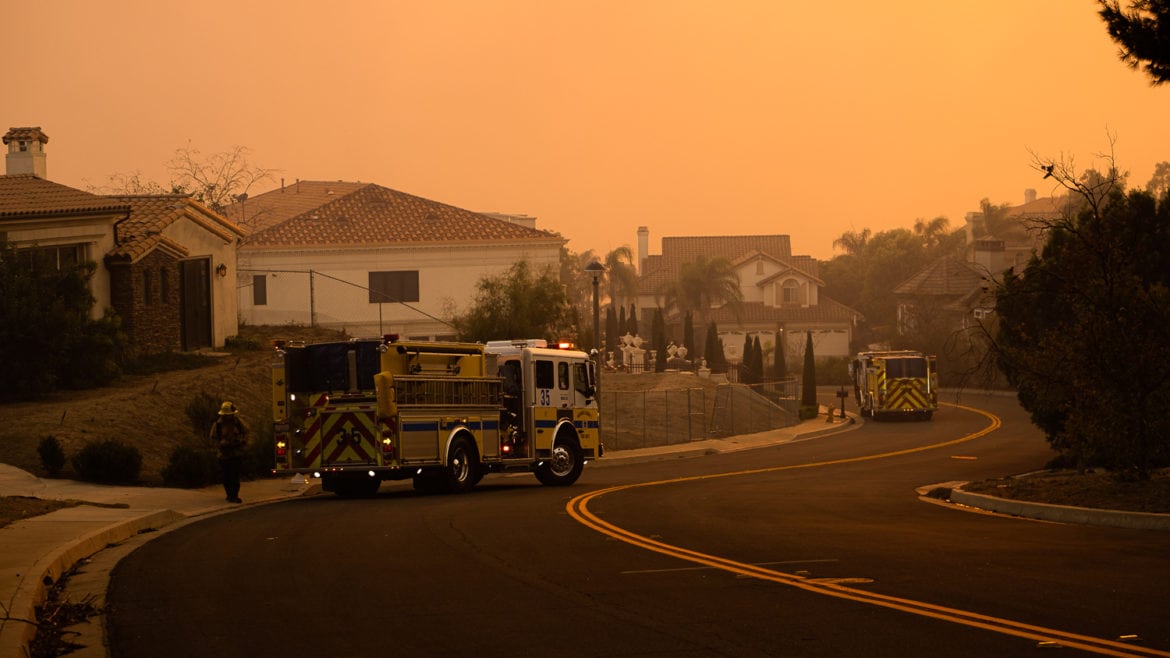 Orange County residents witnessed three wildfires in the last three months, and while no lives were lost, the event served as a sobering reminder of serious communication problems long present in the county’s emergency communication system.

Editors Note: This three-day series takes a look at the ongoing risks for many Orange County residents who are living near wildfire zones that are burning more often with each passing year. This is the first story in the series. In the second story, Hosam Elattar examines what the fire means for Chino Hills State Park, with the fire burning more than 60 percent of the parkland. In the third story, Nick Gerda examines how homes were approved in such fire prone areas in the first place.

Over 30,000 acres burned between the Silverado, Blue Ridge and Bond Fires, all of which saw unique communication responses that failed to inform the public in different ways.

In a series of press conferences during Silverado, public officials largely praised their own response to the blaze and their communication with the public, despite resident complaints on social media and in community meetings that emergency responders failed to effectively communicate evacuation orders.

A grand jury report in 2019 documented how Orange County emergency responders have long struggled with giving timely information to the public, painting a response that failed to communicate clearly to the public throughout the evacuation process.

The grand jury made a variety of recommendations on how to improve the situation, several of which were implemented including updates to the AlertOC notification system.

But similar issues to the Canyon 2 Fire still persisted this year in the county’s fire response.

New issues also arose with the county’s first major emergency during the coronavirus pandemic. Evacuation centers quickly filled up, requiring a mass expansion, and in one fire no evacuation centers were opened by the county at all for fear of the virus’ spread. 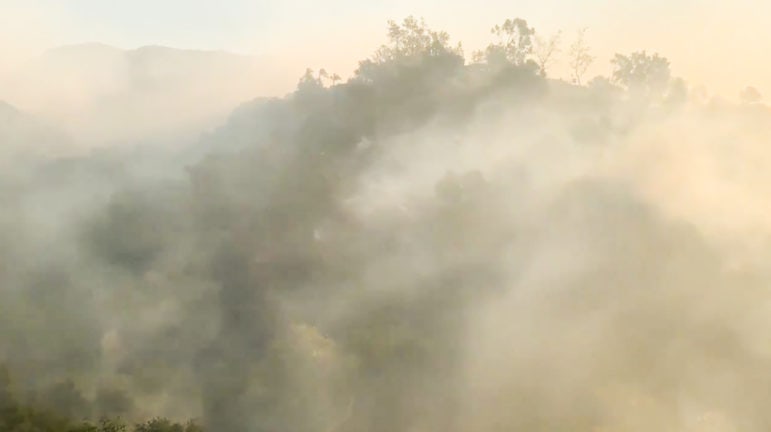 A still from a video posted to Twitter this morning of the smoke from the Silverado Fire in Irvine.

The first two fires this year showed the difference between when cities stepped up to lead versus the county’s decision making.

The City of Irvine, the first and largest city forced to evacuate during this year’s wildfires, focused more on communication with the public than any other city during the wildfire: City council members were publishing updated information on the fire ahead of or in sync with the city’s own police department and emergency response teams, utilizing an evacuation plan drawn up last year.

However, the evacuation plan hadn’t been updated to reflect the COVID pandemic, and the city quickly filled up over a dozen evacuation centers in a few hours. Voice of OC reporters on the ground saw centers fill up in under 20 minutes, and Irvine city staff frequently closed and reopened centers throughout the first few days of the fire.

The city’s leading role also saw discrepancies between evacuation advisories with other agencies. In their live maps, the Sheriffs’ Department and Irvine had big differences, with some residents under no evacuation order or advisory on one map and under mandatory orders in the other.

A similar problem cropped up in 2017, with the OC Sheriffs’ Department and the city of Orange sending out conflicting maps within 20 minutes of each other showing different regions of the city that needed to evacuate during the Canyon 2 Fire.

Irvine Police Sgt. Karie Davies, the police department’s Public Information Officer, said all the data on their maps and mandatory evacuations were issued based on advice from the Orange County Fire Authority, and could not speak on what was represented on the sheriffs’ maps.

But when asked by Voice of OC reporters, OCFA’s public information office said that all evacuation orders were under the sheriff’s control, and decisions were made based on incoming information between OCFA and the sheriff’s department.

Carrie Braun, Public Information Officer for the OC Sheriff’s Department, said evacuation decisions were made at command posts as a unified decision between the different agencies responding to the fires, including OCFA and individual city’s police departments, and that map updates were handled by trained county employees. 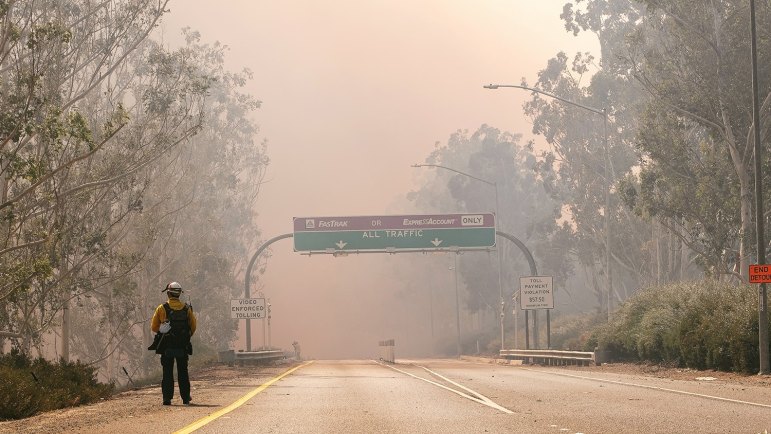 A firefighter stands by the 133 South toll road highway entrace observing an active fire that is happening a couple of yards away on Oct. 26, 2020.

Over a month after the Blue Ridge Fire, it still remains unclear who was actually in charge of setting up evacuation centers.

When reports of a fire in the hills east of Yorba Linda first popped up it was being called the Green Fire, and then swiftly had its name changed to the Blue Ridge Fire, prompting some confusion among local officials as to whether or not they were two separate fires nearby or one and the same.

The OCFA also didn’t have any public information officers available to respond in the early hours of the Blue Ridge Fire as they were focused on the Silverado Fire, slowing initial efforts to find official updates on the status of what would become the larger fire.

But once public information officers were on site, OCFA and the Sheriff’s Department largely handled all updates surrounding the fire. Voice of OC found no disparities between the evacuation information being released by county agencies and subsequent data from the cities of Lake Forest, Mission Viejo and Yorba Linda.

However, officials struggled more with the establishment of evacuation centers in the Blue Ridge Fire compared to Silverado, which had a series of staffed centers up and running swiftly and was forced to open several previously unplanned locations.

Initially, the Blue Ridge Fire only had one advertised evacuation center, set up at the Thomas Lasorda Jr. Field House several hours after the first round of mandatory evacuations were issued, leaving many residents with no set place to go after leaving their homes.

When asked by Voice of OC who was in charge of arranging evacuation centers, no clear answers were offered by public agencies.

Braun said that there is generally one trained county employee in charge of coordinating evacuation efforts with cities if they requested it, and that individual cities would have more knowledge on how they handled their evacuations.

The surrounding cities of Mission Viejo and Lake Forest were also forced to evacuate small portions of the city and both contract with the OCFA and OC Sheriffs’ Department for their public safety offices, leaving it unclear who was responsible for setting up evacuation centers in those cities.

The 2019 grand jury report pointed out similar confusion surrounding fire communication and evacuation procedures last year, finding that, “Lack of coordination among the involved agencies caused Emergency Public Information sent out about evacuations during the Canyon 2 fire to be inconsistent, and confused residents.”

The Orange County Fire Authority’s Board of Directors issued a short statement on the grand jury’s finding.

“Public safety agencies have a responsibility to coordinate messaging to ensure the public will receive factual and concise information. That practice is challenged by media messaging, social media posts and a wildfire that was quickly escalating. In this case, it was a matter of life and death and the best information at the time was sent.” 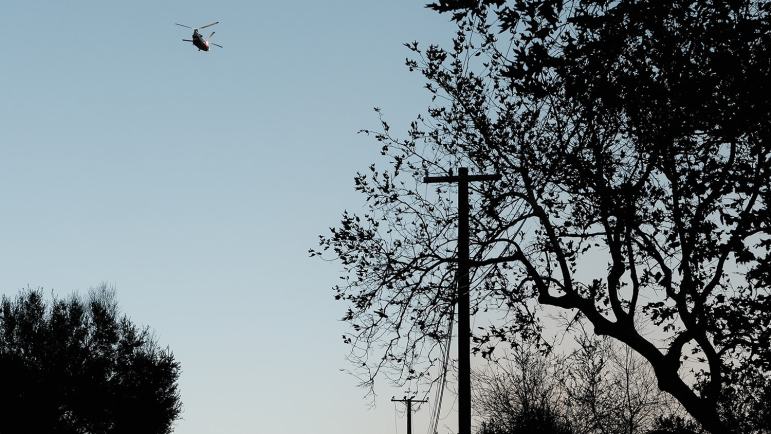 The worst breakdowns in communication came during the Bond Fire, which set Silverado Canyon ablaze for the second time in two months. Before the fire started, Southern California Edison informed customers they would be turning off the area’s power due to a red flag fire warning in the area.

When a house fire started just a few hours later, residents were unable to call 911, forcing them to go in person to the fire station to report the blaze. According to one complaint sent to the California Public Utilities Commission, residents couldn’t get word to firefighters for half an hour, and neighbors were trying to suppress the blaze with garden hoses.

When evacuations started, residents did not receive notices on any of their devices due to the power outages, and many reported having to run door to door telling their neighbors to get out as the blaze moved forward. Officials also chose not to open any evacuation centers due to concerns surrounding the coronavirus, despite having opened centers for fires just weeks before.

The issue was not unknown: multiple residents have shared letters they sent to the commission outlining those same concerns.

“You need to understand that when you turn the power off in Silverado – We have no cell service therefore we could not call 911 if an emergency arose or a fire did in fact start. When you turn the power off you are endangering the lives of everyone in our community,” wrote Megan Dornbush, who sent an email to the utilities commission the day before the start of the Bond Fire.

Spenser Li, another resident of Silverado Canyon, began asking Edison questions about the shutoffs after the Silverado Fire, and was shocked by some of the answers.

“I told them that one day there will be a fire and no one in the canyon will know because we can’t get 911. One of them downright told me ‘someone will knock on your door when the fire is close by,’” Li said.

In response to questions from Voice of OC, Edison said that residents were warned in advance that the power would be shut off, and local authorities have repeatedly refused to speak about power shutdowns during any of the fires.

“I think it’s something we’re going to have to explore with them in the future,” said OC Sheriffs’ Lt. Gary Knudsen at a community meeting with residents on Dec. 5. “Unfortunately, they’re not here.”

After action reports on all three fires are still ongoing, with OCFA participating in the investigation behind Silverado and Bond while San Bernardino County handles Blue Ridge, which started in Chino Hills.