During the February 2019 Point in Time count of homeless persons packages were distributed in some areas containing socks and the note "Keep your head high."

After years of pressure from activists and the courts, Orange County picked up the pace of addressing street homelessness last year, though going into 2020 officials acknowledge the scale of the issue is much larger than current efforts are tackling.

The growing numbers of homeless people dying in Orange County – which now tops 200 people per year – were highlighted early in 2019 with an emergency request from U.S. District Judge David O. Carter, who called it a “public health crisis.”

Carter also criticized county officials for leaving millions of dollars in available state homelessness grants on the table by not applying for them.

County health officials, in turn, committed last year to sending out street health care teams to treat homeless people’s conditions before they escalate to going to the emergency room.

And while the county looked to build a new 425 bed homeless shelter in Santa Ana – to replace its existing Courtyard shelter in the city – south county cities continued to fight back against efforts to create a shelter in their area.

Last October, officials celebrated the groundbreaking of a new mental health campus, called Be Well OC, that’s scheduled to open in January 2021 near the Santa Ana riverbed in Orange.

At the same time, county supervisors’ spending decisions continued to tilt much more strongly toward law enforcement than health services.

Orange County sheriff’s officials outspent their revenues by $33 million during this last fiscal year – prompting county supervisors to pull millions of dollars from other departments like the Health Care Agency to cover the shortfall.

Heading into 2020, officials are rallying around a plan to build at least 2,700 new units of permanent housing with support services for homeless people, which a UC Irvine study found would save more taxpayer money than it costs, while getting homeless people off the streets.

Nearly two years since the 2,700 units plan gained support, 24 units have been built and 280 are under construction, according to official data.

Below are the most shared and most read stories on homelessness and mental health Voice of OC published in 2019. 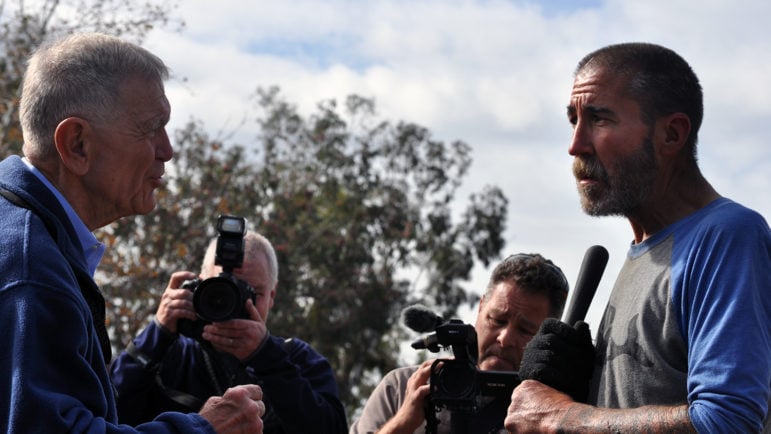 U.S. District Judge David O. Carter, who oversees several lawsuits over homeless policies against the county, speaks with former Santa Ana Riverbed resident Ronald Heatley about going to a motel and getting him set up with social services during Carter’s tour of the riverbed Feb. 14, 2018.

March 1 Five South Orange County cities will head to Federal court after a lawsuit filed by attorneys alleged dumping of homeless people and blamed the region’s lack of shelters. Read the Story »

March 12 County Supervisor and CalOptima Director Andrew Do is criticizing the county health insurance agency for the poor and elderly for being too slow in implementing medical teams that will treat homeless people on the streets, just as CalOptima is being asked to appear in a federal court hearing over homeless policies next month. Read the Story » 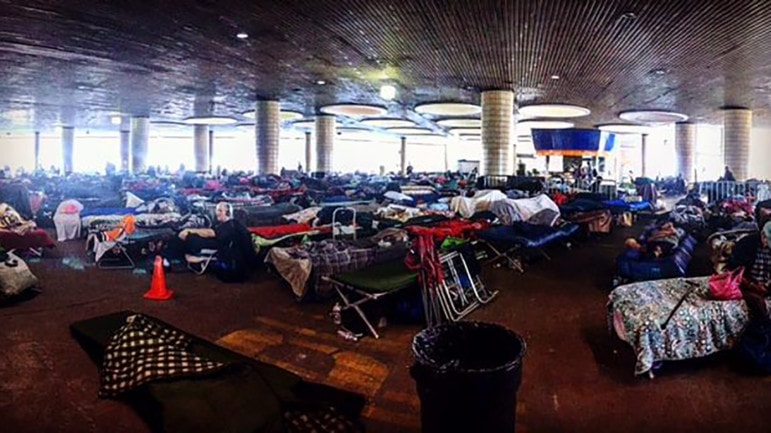 The Courtyard shelter in Santa Ana.

March 14 The ACLU, Thursday morning, issued a report highlighting unsanitary, unsafe and abusive conditions at three County run shelters as the County and all OC cities are scheduled to appear in federal court in less than three weeks over the shortage of shelter beds and homeless policies. Read the Story »

March 18 OC Supervisors took the first step this month in creating a regional housing finance trust that will build 2,700 housing units for homeless people and affordable housing for low-income residents. Cities still need to sign up for the housing trust first. Read the Story »

April 3 One of OC’s next homeless shelters could be headed for the affluent south county suburbs, the judge warns after citing a lack of progress by elected officials to create a mental health shelter. Read the Story »

April 8 Medical field teams will treat homeless people living on the streets after a federal judge pressured CalOptima — the county insurance plan for the poor and elderly — which also last week earmarked $100 million to homeless services. Read the Story »

April 9 Smaller counties than OC have asked for and received tens of millions more in state and federal funds for preventative health and housing programs that studies have shown save taxpayer dollars overall, help homeless people get off the streets, and save lives. Read the Story »

April 11 Buena Park City Council members found a new homeless shelter site in a more industrial, east-end part of town, after taking heat from the public for considering a location that was closer to neighborhoods and a number of schools. Read the Story »

A police officer points on a map provided as a guide during the 2019 homeless point in time count.

7,000 Homeless People in OC is a Wake Up Call, Experts Say

April 25 The nearly 7,000 people officially homeless n Orange County should be a wake up call to the County and all 34 cities to start building affordable and permanent supportive housing, in addition to shelters, according to experts in the field. Read the Story »

May 22 Last year, as county officials were hauled into federal court over a shortage of homeless shelters, Voice of OC reported the stockpiled mental health funds had reached $186 million beyond the reserves. Read the Story » 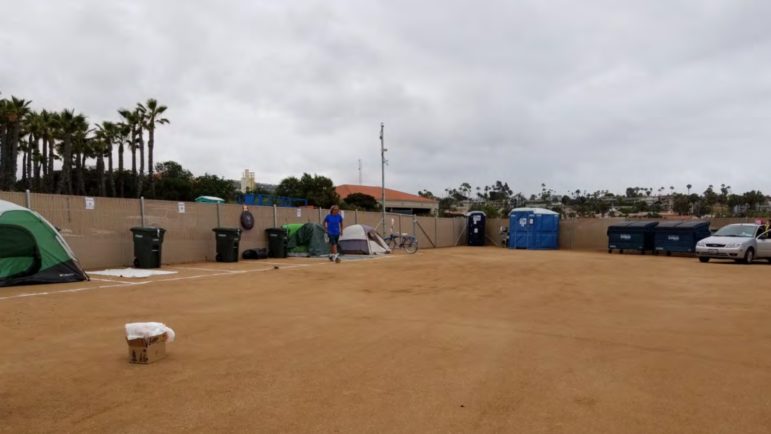 San Clemente’s official homeless campsite soon after it opened in May 2019, as seen in a photo filed in federal court. About 36 people sleep there on any given night, according to city officials.

San Clemente to Move its Homeless Population to a City Lot

May 23 San Clemente is moving its homeless population to a city-owned lot Friday, but homeless rights attorney Carol Sobel warns the move is unconstitutional. Read the Story »

May 24 San Clemente pushed ahead with anti-camping enforcement Friday when county healthcare workers and Sheriff’s deputies asked North Beach homeless camp residents to pack up their tents and move to a city lot, despite a fresh lawsuit against south county cities. Read the Story »

June 7 CalOptima counted 10,000 of its members as homeless in Orange County. The count is 3,200 higher than the roughy 6,800 homeless people counted by the County in January. Read the Story »

June 11 Some officials praised the proposal, while others first want a “comprehensive plan” for the full property that could include a university extension site, student housing, a mental health campus, and market-rate housing. Read the Story » 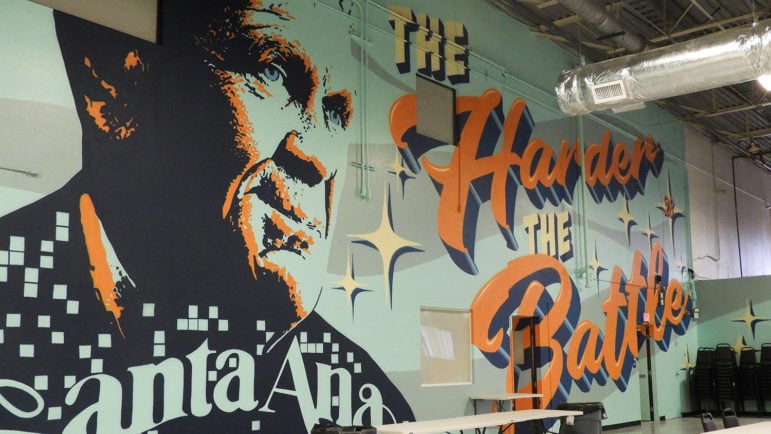 Mural of U.S. District Judge David O. Carter, who oversees the lawsuit against the county, by Brian Peterson, lead artist for Faces of Santa Ana. Nov. 15, 2018.

June 14 South county cities are entitled to litigate before a judge “whose impartiality neither the parties nor the public have a reasonable basis to question,” the ruling states. Read the Story » 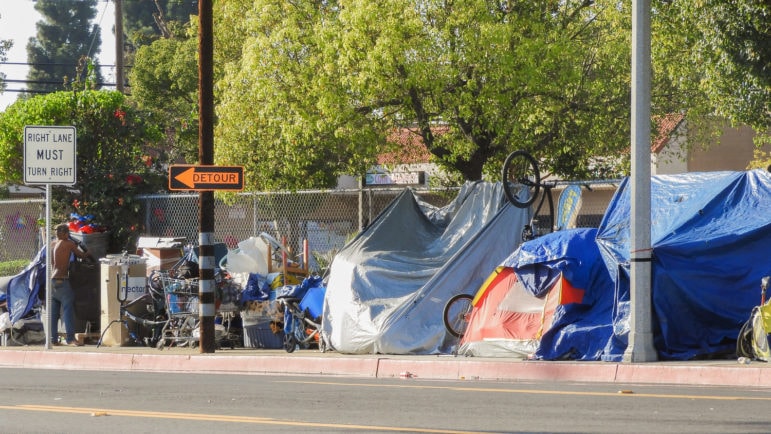 The homeless camp on the corner of Gilbert Street and Valencia Avenue in Fullerton. Residents have been voicing their concerns about the camp to the City Councils for months. Oct. 9, 2019.

July 10 The City Council voted to declare a shelter crisis in Fullerton so the city can cut through the red tape of building laws to build homeless shelters faster. Read the Story »

July 23 “This is a game-changer,” Judge David O. Carter told the courtroom Tuesday before signing off on the settlement, which the court can enforce for the next three years. Read the Story »

July 31 It’s a 43 percent increase from two years earlier. “We have a shortage of both affordable and available housing to meet the needs of our populations,” said Susan Price, the county’s coordinator of homeless services. Read the Story »

Sept. 24 Santa Ana, Laguna Beach, and Bellflower agreed to provide specific amounts of shelter for homeless people and to not enforce anti-camping laws against them unless they’re refusing available beds that are appropriate for their disabilities. Read the Story »

Oct. 1 Orange County Sheriff’s officials outspent their revenues by $33 million during this last fiscal year – prompting county officials to pull millions of dollars from other departments like the Health Care Agency to cover the shortfall. Read the Story » 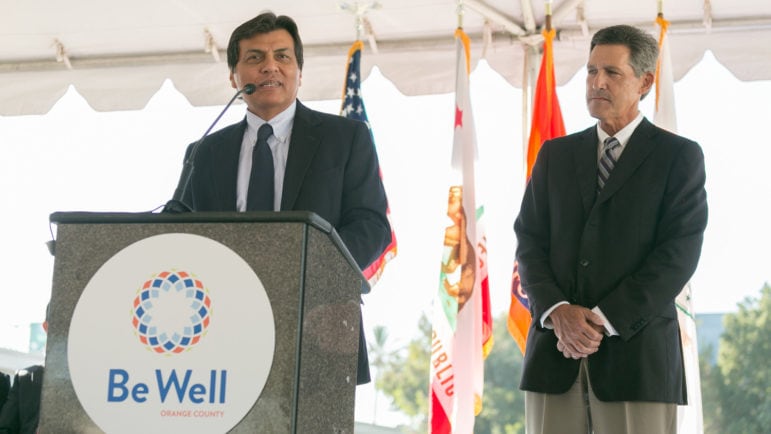 Richard Sanchez (left), director of the county’s Health Care Agency speaks at the Be Well OC mental health campus groundbreaking on Oct. 16, 2019. Standing next to him is Dr. Rick Afable, who leads the nonprofit that will run the campus.

Oct. 17 Plans call for mental health and drug addiction treatment programs to be available to all county residents, regardless of who their insurance provider is, which officials said would be the first facility in the nation to do so. Read the Story »

Oct. 22 The rate at which children were hospitalized for serious mental illnesses rose 87 percent over a nine year period, according to the annual Conditions of Children in Orange County report. Read the Story »

Oct. 22 OC’s top elected officials had nothing to say Tuesday when they officially received a report showing jumps in children going to the emergency room for mental illness crises and suicide attempts. Read the Story » 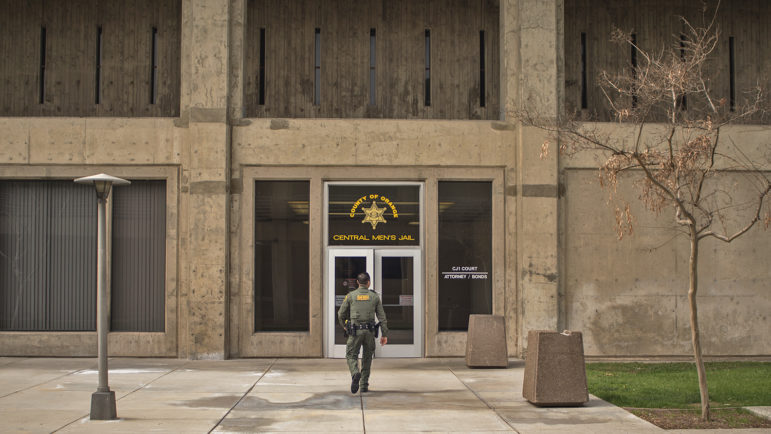 A sheriff walks into the Orange County Central Men’s jail.

Oct. 23 There was no discussion of how much money would be devoted to the plan or how many doctors or nurses would be treating inmates. Answers weren’t provided after the meeting. Read the Story »

Nov. 18 Santa Ana housing advocates say local landlords are rushing to evict tenants or raising rents to get ahead of a new California rent control law, and calling on the City Council to follow other cities across the state in enacting protections for tenants until the state law takes effect. Read the Story »

Nov. 20 Much of the frustration centered on plans to put the shelter in a low-income city that long has hosted more shelter beds than any other Orange County city, while wealthier south county cities have refused to open a shelter. Read the Story » 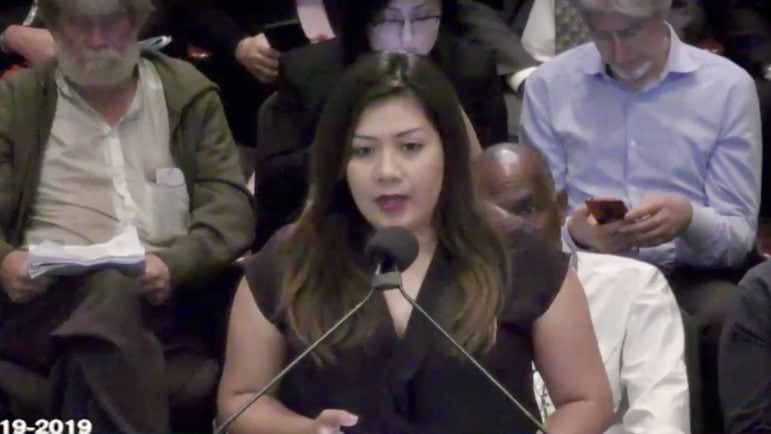 Angie Cano voices concerns about the proposed Yale homeless shelter during public comments to Orange County supervisors on Tuesday, Nov. 19, 2019. The following day, Supervisor Andrew Do asked her to resign from the county airport commission.

Nov. 25 Supervisor Andrew Do confirmed he asked Angie Cano to resign, but declined to say if it was because of her public comments. Read the Story »